An Armed and Not So Polite Society

The gun crazies are at it again. 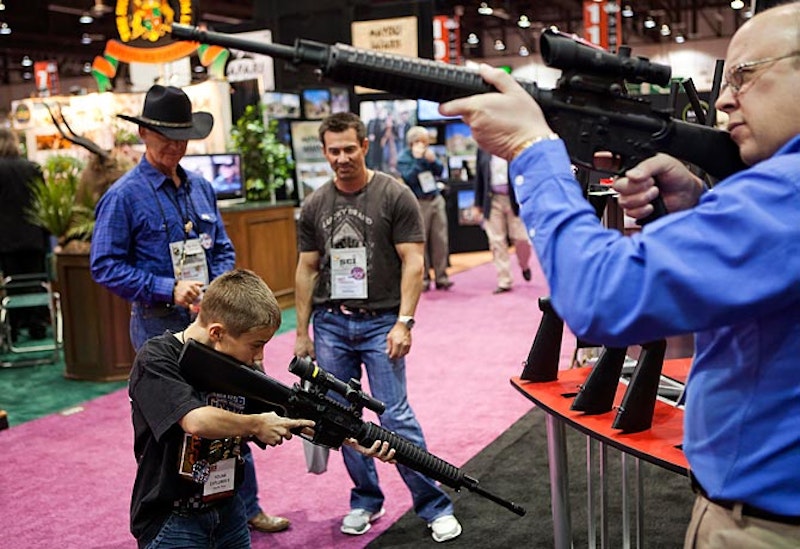 Marylander Raymond Woollard made his point and got his gun. So if he accidentally shoots himself (or someone else) in the foot he has no one to blame but himself. Ditto the Animal House kids on the University of Colorado campus. That state’s Supreme Court ruled that students cannot be prohibited from carrying guns to class or anywhere else on campus. In Texas, guns are outselling Tequila shooters and the run is helping to create a national shortage of firearms and ammunition. And there are now more than 1200 militia cells in America, armed and a little deranged, whose declared enemy is… their government.

The gun crazies are at it again. In the case of Woollard, of Baltimore County, the Navy veteran went to federal court to challenge the Maryland gun control law under which he was denied a permit to carry a concealed weapon. U.S. District Court Judge Benson Everett Legg, an appointee of President George W. Bush, ruled that Maryland’s restrictive law which requires a person to have a “good and substantial reason” to carry a gun was too broad. Legg wrote: “The Court finds that the right to bear arms is not limited to the home.” Presumably guns will now be allowed on the hip or cuddled in the armpit. The gun lobby is jubilant. The Maryland attorney general’s office has asked the judge to delay the ruling’s effect pending an appeal. Most experts believe the ruling will withstand appeals.

The Maryland gun control law, adopted in 1973, is among the most restrictive in the nation. It requires a 10-day cooling off period, originally intended to prevent crimes of passion, and a background check for criminal and psychological records. Concealed carry permits are limited to those, for example, who can demonstrate that they might be in danger. It was on this point that Legg ruled that the Maryland law violated the Second Amendment. There are 33 states in the category of “shall issue” concealed carry permits while Maryland is among the 10 states that “may issue” permits at the discretion of a Handgun Permit Review Board. Legislation is advancing in Oklahoma that would broaden areas where guns can legally be carried. The Maryland law currently does not grant reciprocity to residents of other states with carry laws.

In Colorado, the state’s Supreme Court struck down a gun ban at the University of Colorado that prohibited students from carrying guns on campus. The state’s concealed carry law prohibits local governments from limiting carry rights with few exceptions. The court ruled that colleges were not among those with an exception. Until now, Utah was the only state that allowed students to carry weapons on college campuses. Anyone who remembers the movie Animal House can certainly imagine the dangers of armed collegians at keg parties. A distraught student with failing grades or a campus geek who’s been dumped for a football hero is certainly no candidate for a firearm. Remember the massacre at Virginia Tech in 2007, when 32 people were killed and 25 others wounded, after a student who was treated for severe anxiety disorder slipped through the instant background check when he purchased two handguns.

Across the nation, there is a shortage of saleable guns and ammunition. And the shortage is especially acute in Texas where people are scooping up firearms because they fear that if President Obama is reelected he will launch a crackdown on gun ownership. A similar buying spree occurred prior to Obama’s 2008 election. Another phenomenon contributing to the rush to by guns is the omen of apocalypse that the world is coming to an end. Last year, the FBI conducted 16.3 million background checks on people applying to buy guns, up from 12.7 million in 2008 and 11.4 million in 2007. The FBI estimates that there are about 350 million guns owned in the United States up from 192 million in 1994. More than 100 million are handguns. The FBI also estimates that the average gun enthusiast owns four guns.

Americans own more guns than any other people on the planet. They regard gun ownership as part of their birthright and demonstrate a reverence for the Second Amendment that is usually reserved for deities. It is the Second Amendment that has been at the center of much of the nation’s constitutional debate over whether that simple protection applies to individual citizens or those owning guns to participate in the protection of civic freedom and liberty. Much of the interpretation is based on the placement of a simple coma. For as a statement of freedom the amendment is one thing but as a simple work of grammar the sentence (or is it?) couldn’t survive a freshman composition class. Its draftsmanship is sloppy and its punctuation is atrocious, leading to the confusion and debate.

Though the two iterations may have the same intent, they seem to be saying two different things. Neither would win a literary prize. Because of the overuse and misplacement of commas, the first version has been interpreted to place emphasis on the militia aspect of gun ownership while the second, somewhat sanitized, rendition tends in the direction of the individual. The imprecision and ambiguity of the two versions lingers on. Through the years, those commas have caused a lot of grief. Even the greatest Second Amendment lawyer in the land, Lawrence Tribe, of Harvard Law School, has changed his mind. For years he argued that the right to bear arms applied to armies and militias and was not an individual right. Then, some years ago, Tribe concluded that he’d been wrong and was now convinced that the right to bear arms was intended for the individual.

Much of the current round of hysteria over gun rights is the huffing-and-puffing of the National Rifle Associations’ human bugle, Wayne La Pierre. La Pierre recently told the Conservative Political Action Conference (CPAC) that Obama will “destroy” gun rights if he is reelected. “The fight is on and the NRA is all in,” La Pierre said. “When the sun goes down on Election Day, Barack Obama will have America’s gun owners to thank for his defeat.”

One of the oldest gun laws in the nation, New York’s Sullivan Act, adopted in 1911, was not a gun control law at all but a form of patronage advanced by the dominant political clubhouse of the day, Tammany Hall. Introduced by a Tammany stalwart and thoroughly corrupt politician, Tommie Sullivan, the law gave police loyal to Tammany discretionary powers to award gun permits to friends of Tammany Hall and to deny them to political adversaries. Then and now, the adage lives on: An armed society is not necessarily a polite society.