With the Republican Party careening ever rightward, President Obama stands for a conservatism that’s utterly lost on the Right. 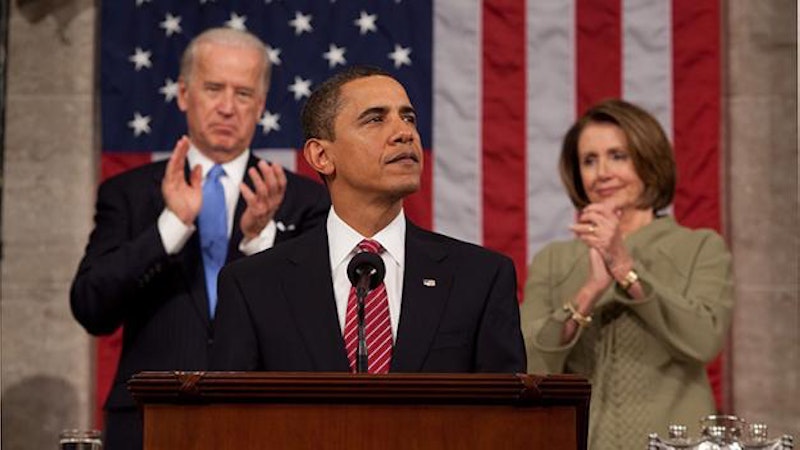 There are two things that will probably hand President Obama a relatively easy reelection: the nomination of Rick Santorum as the Republican nominee for president (not that likely), and the Right’s continued vein-popping attacks on birth control and reproductive rights (very likely).

Both scenarios represent how the Right is hewing close to its extreme flanks. As the economy breathes slightly easier and Obama continues to knock off terrorist after terrorist, there is less room for moderates such as Mitt Romney to distinguish themselves, and more oxygen to ignite blowhards like Santorum who prefer to fight for the resplendent America of the 1950s rather than look soberly at America today. It’s past the point of surprising: Republicans today bear little resemblance the far-gone Republicans of the 90s—the ones who supported health insurance mandates and cap and trade legislation and worked with Bill Clinton to pass real entitlement reform.

A political party clinging blindly to Grover Norquist pledges and decaying cultural values isn’t going to be relevant to a country with problems that far outweigh any simple tax ideology. Take contraception, for example:

[S]pending less money on contraception services leads to higher health care costs and higher taxes. When Texas cut $73 million from state family planning services, the increase in unplanned pregnancies ended up costing $230 million in additional Medicaid burdens, according to the nonpartisan state Legislative Budget Board. The other result was more unintended pregnancies and, presumably, more abortions. Other states are considering similar measures.

Well done, Texas. You’ve saved the American girl from prostituting herself. Republican statehouses across the country are doubling down on Rush Limbaugh’s bet: that American women are happy to describe themselves as sluts and prostitutes and that no one—I mean, no one—has sex before marriage or uses birth control for anything other than having all the sex all the time. This, coming from a party that decided to throw a hissy fit over the debt ceiling because it was politically convenient—they can’t decide whether to save money or further alienate themselves from modern America.

Take spending on the Federal level. It’s old hat to remind readers that dear old Ronald Reagan was as much a tax-hiking Keynesian hellhound as any Democrat. It’s not old hat to put Obama’s tax record in perspective:

“The correct answer to this question is that the tax burden on middle-class Americans has decreased during Obama’s presidency. More than one-third of the 2009 stimulus bill consisted of tax cuts, including expanded tax credits for workers, people with children, college students, homebuyers, and the unemployed. In 2010, Obama proposed and Congress accepted a substantial temporary reduction in the payroll tax, which was recently extended through 2012.”

Of course, the Bush-era tax cuts, unpaid for and costing trillions of dollars, haven’t gone anywhere. What about Federal spending?:

Here’s a president who inherited a collapsing economy and a disastrous oreign policy portfoilio from the last handful of presidents, who has been the target of some of most ridiculous and sustained political and personal attacks in recent history—here’s a president who, with faults and shortcomings, is doing it. Little by little, he’s doing it. Not perfectly, not amazingly, with plenty of room for partisan disagreement—but it’s impossible to look at his record and not see that he is “conservative” in the historical sense of that word. Conservatism is a frame of mind and reference; it is a sense of doing things carefully and as correctly as possible. Democrats and Republicans alike can embody it.

And the guy frustrates the hell out of me. His Justice Department is out defending the assassination of American citizens without due process. His drone strikes are lethal, for the terrorists and the innocents they hide behind. The drug war still runs unchecked and barely diminished, if at all.

Obama’s record is playing out like a liberal conservative. He’s used tax cuts and health care reform (which, according to the CBO, is set to save more money than previously imagined) and slowing the rate of spending while navigating the country out of a massive recession he had nothing to do with. He’s worked within the system without gutting it or transforming it.

Romney will most likely secure the nomination, probably via a little backroom dealing at the convention to secure the last hundred or so delegates he needs. Come the general election, he’ll be up against an opponent more conservative than himself.