Next up for Frank Bruni: Greece has an economic crisis. 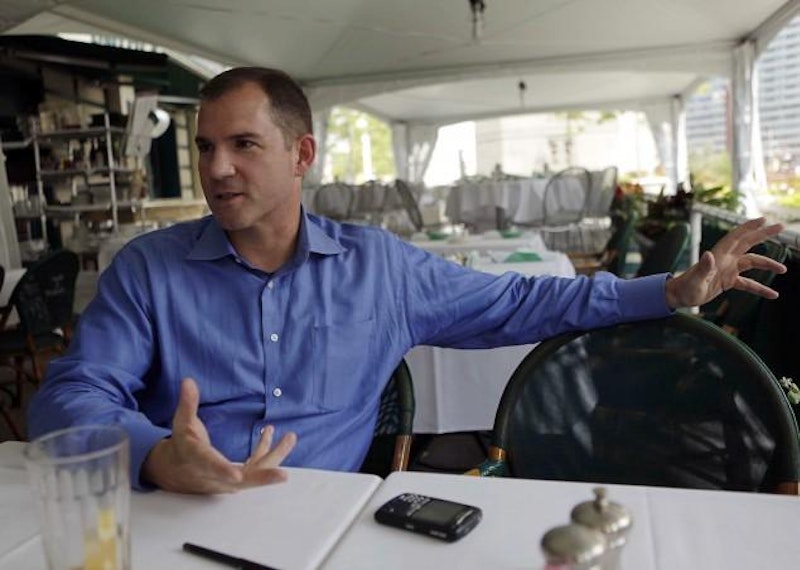 Frank Bruni, the spent New York Times op-ed columnist, doesn’t care for GOP presidential candidate Scott Walker. That’s his prerogative, of course, and it’s a lock that he’ll furrow his brow, like so many other liberals, and vote for Hillary Clinton in next year’s election. (I’m discounting the euphoric “boom” for Bernie Sanders that’s jazzing up “progressives” and amusing journalists this summer.) And there’s no reason to expect that Bruni would write much positive about Walker: the Wisconsin governor is anti-union, anti-Obamacare, makes pitches to both mainstream and socially conservative Republicans and has a “newfound affection for ethanol” now that he’s campaigning in Iowa.

What’s irritating about Bruni’s July 15th attack on Walker is that he presents this particular candidate as the most egregious example of a pandering, ambitious politician. After dinging Walker for invoking God in the official announcement of his campaign on Monday, Bruni continues: “What I see in [Walker] is the kind of soullessness too common in American politicians and the kind of careerism that makes American politics such a dreary spectacle. I see an ambition even more pronounced than any ideology. I see an interest in personal advancement that eclipses any investment in personal growth. These are hardly unusual traits in our halls of government. But they’re distilled in Walker…”

Two immediate thoughts: if Bruni finds American politics so “dreary,” he ought to cede his perch at the Times to someone less tired, or, in the event he likes drawing a fat paycheck, then perhaps a switch of topics is in order—poker, television, rugby, bridge or maybe a return to reviewing restaurants. Second, while Bruni finds Walker’s political ambition trumping “personal growth”—whatever that nebulous phrase means—especially stomach-churning, his focus on the Midwesterner is unfair. “Fairness” is a word not heard much in the Times newsroom—at least in the Sulzberger Jr. era—but Bruni’s recitation of Walker’s lifelong career in politics is needlessly mean-spirited. He’s talking about politicians! That’s what they do: almost without exception, career pols start the schmooze early in life and never let up. Does Bruni think that Bill Clinton’s famous photo shaking JFK’s hand as a teenager was merely serendipitous? That Martin O’Malley, Marco Rubio, Ted Cruz, Jeb Bush, Hubert Humphrey, Richard Nixon, Fritz Mondale, Mitt Romney, scads of Kennedys, Hillary Clinton and on and on and on didn’t dream of high office since their teenage years? In fact, in recent history, the only president who didn’t start courting future votes in high school, instead switching careers in middle age was Ronald Reagan.

Bruni’s ham-handed attempt at humor bombs: “I suspect that we’ll learn, with just a bit more digging, that [Walker] was mulling campaign slogans in the womb and ran his first race in the neighborhood wading pool, pledging to ease restrictions on squirt guns and usher in a ban on two-piece bathing suits.”

Since Walker’s rise in the polls this year, he’s made many blunders: he appeared tongue-twisted when asked about foreign policy, flip-flopped on immigration reform and hasn’t presented a concrete economic blueprint that he’d try to enact as president. I do think that his “everyman” persona, with a meager bank account and Costco shopping habits, is a winning contrast to the money-grubbing Hillary Clinton, but that alone won’t win a general election. Nevertheless, Bruni’s animus towards Walker is striking, perhaps echoing other liberals’ fear that the plain-looking guy from Wisconsin just might succeed Barack Obama.