Bernie or Bust at the DNC

Protests on the streets of Philadelphia. 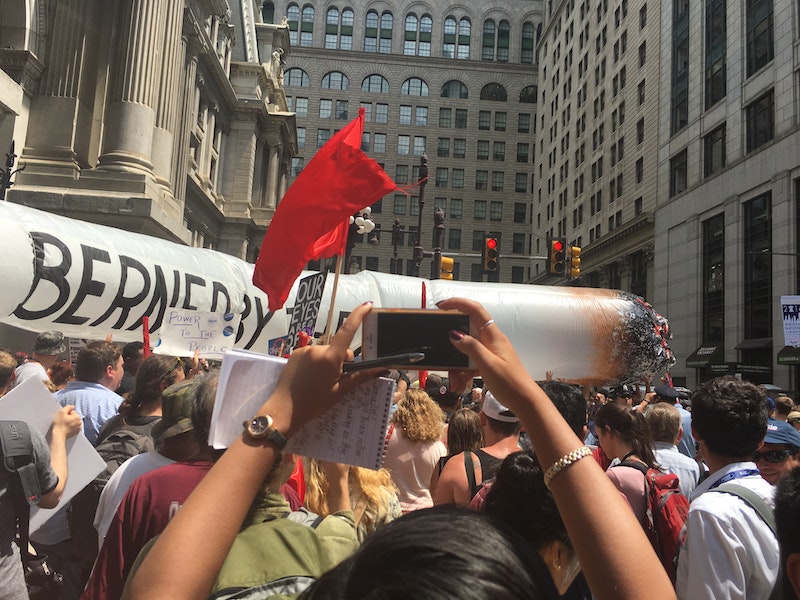 Yesterday in Philadelphia, prior to the start of the Democratic National Convention, I saw something that I believe was unprecedented in American political history: thousands of people assembled outside a political convention, in favor of a candidate who not only had dropped out of the race weeks earlier and endorsed his opponent, but was on a stage in the same city at the same time, reiterating that he’s no longer a candidate.

In late 2011, the city of Philadelphia kicked the Occupy Philly encampment out of its spot near City Hall, in order to begin construction on a new plaza. That very plaza, ironically, was used as the main headquarters for the DNC protests.

The protest Monday was (mostly) Bernie Sanders supporters. As with most leftish protests, many different and fringy groups and causes were represented. But the vast majority of the crowd was there for Sanders. They were wearing Bernie buttons, shirts, and hats, with more than one person even carrying a Bernie puppet.

Sure, a lot of these people were straight out of hippie central casting. But there were protesters of all ages there, as well as a lot of people of color. And if there’s such a thing as a “Bernie Bro,” I didn’t see many of them. Some wanted Bernie to fight, somehow, for the nomination. Others wanted him to go third party. Some had moved to the Jill Stein camp. But none were the slightest bit interested in supporting Hillary Clinton.

There were a few other random, non-Bernie groups there. Alex Jones’ InfoWars rented one of those portable billboards and drove it around City Hall, to some positive response.

In possibly the most amusing moment of the afternoon, a pair of self-proclaimed “revolutions” were taking place side by side, both with megaphones: one a small, half-hearted pro-weed demonstration, and the other a more militant protest by Bob Avakian’s cultish Revolutionary Communist Party USA movement. “I respect the revolution,” the weed guy said. “But one brick at a time—I don’t know that ‘burn it down’ is the way to build it back. We’re all farmers…”

Speaking of weed, have you ever been caught in traffic, and the reason was that people were carrying a 50-foot joint across the street from you? This happened to a few unfortunate motorists Monday afternoon, when the protesters began marching down Broad Street towards the convention itself.

Black Lives Matter, though, appears to have sat this one out. I saw a few individual people wearing shirts and carrying signs, but no organized protests or marches. There were various other familiar protest archetypes, including the lone conservative bro in a “Capitalist” shirt who was presumably there to argue with people and film it. And one guy carrying a Palestinian flag. Just about the only thing I didn’t see any of were groups of old men arguing about Trotsky. Has this tradition finally died out? Are none of the old Trots still alive?

Also on hand was Triumph the Insult Comic Dog, along with his puppeteer Robert Smigel and a small crew. They’re filming a sequel to the hilarious Funny or Die/Hulu political special from earlier this year. If you like many, many jokes in a row about unwashed hippies, you’ll want to tune in.

Throughout the afternoon, I saw no violence and little tension. The closest thing to a blow-up was when a four-man fringe Christian group, with large signs and a megaphone, who were yelling at everyone to “repent,” tried to enter a church, much to the consternation of all of the churchgoers. The sign-carriers, though, ultimately backed off and went to go bother someone else (I think they were the same guys who got drowned out by a tuba player in Cleveland.)

The Philadelphia Police Department, having dealt with lots of huge BLM protests in recent years, are pretty good at this sort of thing. Disasters of various kinds—whether fatalities, unjustified on-camera beatdowns, or mass arrests of hundreds of people—were avoided. According to police, there were 55 disorderly conduct citations but no arrests; this wasn’t Chicago, 1968.

I’d assumed prior to the conventions that Cleveland would be more disrupted by protesters, due to its arena being situated right downtown, while Philadelphia's isn't, and is part of a giant parking lot that's hard to get to on foot. The protesters did eventually make it down to the convention site, and even initiated a sit-in. But no one came close to getting into the actual Wells Fargo Center; the hecklers Monday night were actual delegates.

So, do these events indicate that Hillary Clinton has anything to worry about? Probably not. The people showing up in Philadelphia, whether they’re protesters on the street or delegates at the convention, are the most passionate—the true dead-enders. But according to multiple polls, including one released Monday, the vast majority of those who backed Sanders in the primary plan to vote for Clinton. And that includes, of course, Bernie Sanders himself.