Bernie Sanders Should Explain Why He Won't Create Another Venezuela 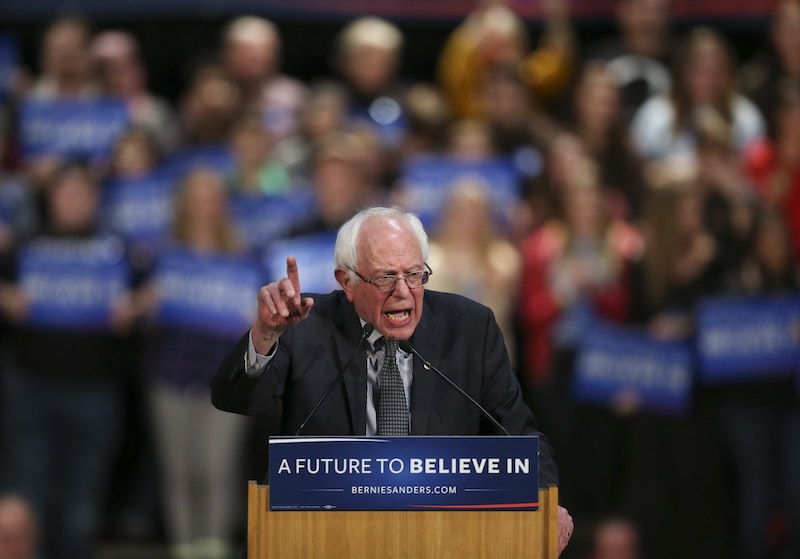 Venezuelan President Nicolás Maduro recently called Bernie Sanders his "revolutionary friend." Sanders, now focused on winning the California primary and getting super delegates to flip over to him, obviously won't be broadcasting this endorsement. Venezuela is now a toxic waste dump that screams, "failed socialist experiment," and he wants to avoid all its fumes at the moment.

The rush is already on, on the right, to draw a straight line between Sanders' version of socialism and the long, slow slide of Venezuela into an inflationary dystopia with a spiraling murder rate and potential coup d'état. It would just be a matter of time, many Sanders critics assure us, before his policies would deliver a similar scenario to our shores.

No candidate can avoid undesirable endorsements. Donald Trump found this out the hard way with Russia's Putin, KKK white-supremacist David Duke, and North Korea's Kim Jong Un. Moreover, when speaking explicitly of socialist revolution in your campaign speeches, you're going to be called on it if another socialist revolution is simultaneously disintegrating. Sanders isn’t really responding to Venezuela-related questions, but he can't stop his opponents from gleefully making political hay with the issue. This is a losing game for him.

It's obviously necessary to step away from partisanship to get a feel for whether or not Sanders defeating Trump in November would put the U.S. on a fast track to the $200 hamburger and half-day waits for bread. Sanders has never cited countries like Venezuela and Cuba as models for the democratic form of socialism he espouses. Instead, he points to Sweden and Denmark. Being rich in natural reserves (the so-called "resource curse") is a double-edged sword when it comes to a nation enjoying long-term economic prosperity. Japan, with few resources, built itself into the world's number two economy after World War Two by erecting an industrial machine that used its citizens as its resource. If you decide to build an entire economy on a natural resource, as Venezuela did with oil, then you live or die on price fluctuations. A barrel of oil was worth $100 a barrel in 2013 and 2014, but it's half that now, as is Venezuela's income.

Hugo Chávez, who ruled Venezuela from 1999-2013, was such a megalomaniac he felt he could overcome the laws of supply and demand. He established price controls to make everyday goods more "fairly" priced. The prices were often set well below market rate, and what ensued was predictable. Firms cut back production, creating market shortages and economic chaos. The government resorted to huge subsidies (gas was only about five cents a gallon, with production costs at $2), and Venezuelans got so spoiled they'd riot when their government tried to raise its price. As firms cut back on production in the natural response to price controls, Chávez would nationalize them, running them poorly. The road to hyperinflation was paved, once again, not via government spending but rather by a seismic restructuring of an economy leading to massive supply shortages.

Looking at post-Chavez Venezuela, you won't see many parallels with the American economy, nor will you be able to make a case that Sanders' policy proposals will produce hyperinflation. The U.S. economy is a powerhouse fueled by the skills of its workers and a formidable economic infrastructure that's the product of decades of investment. Sanders doesn't want to give away free gas. He wants free college, which is an investment in the future that keeps paying off. Sanders doesn't want to take over the coffee industry—or any other industry for that matter—as Chávez did.

Sanders' best response to Venezuela questions would be an enthusiastic, "I'm glad you asked that question!" He could then move on to some bullet points dealing with exactly why Venezuela's present is not the Sanders future. Mention the price controls, nationalization of industries, the huge gas subsidies. Talk about supply and demand and assure everyone you're not like Chávez—that you won't try to fight the natural laws of economics.