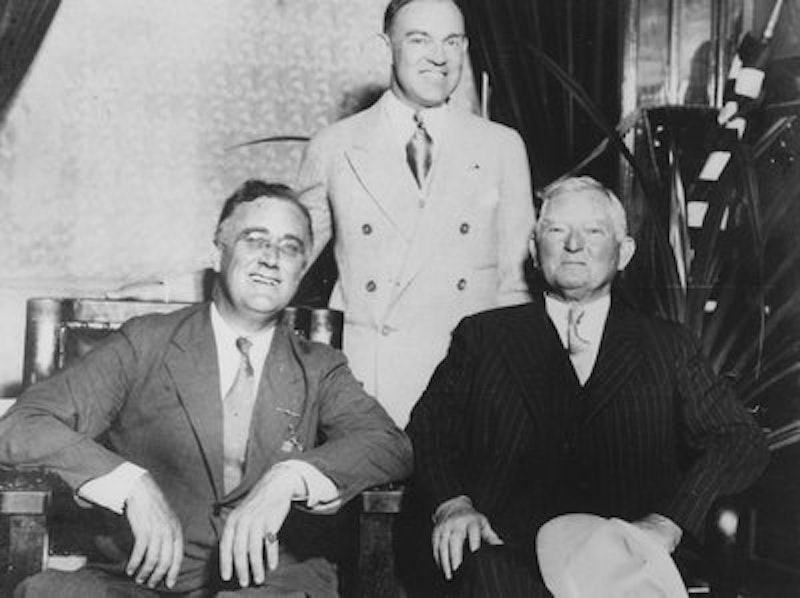 The vice presidency is a necessary appendage to the presidency. It exists as a reminder of man’s mortality and a hedge against an unexpected vacancy. Its stand-by occupants have ranged in our times from the sublime, Joe Biden, to the ridiculous, Spiro T. Agnew, to the Dr. Strangelovian, Dick Cheney, testimony to how alternately strong and fragile American democracy truly is. Fourteen vice presidents went on to become president—nine ascended after a president’s death and five were elected on their own—and still the Republic endures despite what amounts to a political afterthought.

The vice presidency is one of the most ridiculed offices in America’s political schematic. John Nance “Cactus Jack” Garner, famously observed that the “vice presidency isn’t worth a bucket of warm piss.” (School kids are taught the sanitized version.) Garner spoke from the experience of having been elected twice as Franklin Delano Roosevelt’s vice president. But Garner, a conservative Democrat from Texas, eventually turned against the New Deal in 1937 and ran against FDR in 1940.

It has been observed, often enough, that people don’t vote for vice president. They vote for president. True up to a point. But while a vice presidential pick may not help, the choice certainly can hurt. No presidential nominee was ever defeated solely because of a running-mate choice. George H. W. Bush even survived Dan Quayle. But the selection of a running mate is the first insight into a presidential candidate’s management abilities and the kind of people that will populate an administration.

Consider George McGovern’s choice of Sen. Thomas Eagleton in 1972. The lack of thorough vetting and the subsequent revelation of Eagleton’s treatment for mental illness was a major setback and distraction from McGovern’s campaign while he scrambled to find a replacement (R. Sargent Shriver). Similarly, Richard M. Nixon’s choice of Agnew in 1968 – remember vice president who?—became a national laughingstock and almost cost Nixon the election when Agnew failed to carry his home state of Maryland. But in 1972, Nixon planned to dump Agnew from his ticket. By then, Agnew had developed a national following though his lacerations of liberals and the media that would have rebelled against Nixon if he’d attempted to give Agnew the heave-ho.

Recall, too, how Cheney became vice president. He was asked by George W. Bush to vet prospective candidates for the nation’s number two job. Cheney understood the angles and loopholes. He’d been a Congressman, White House chief of staff and secretary of defense. After he collected the appropriate paperwork—including FBI files and interviews—on all the suggested candidates, he had in hand the flaws and vulnerabilities of all potential rivals and convinced Bush that he, Cheney, was the only acceptable running mate. The rest, as they say, is history, including the war in Iraq.

Handicapping vice presidential running mates is the political hobbyists’ guessing game that fills the lull between the final primaries early in June and the national political conventions, this year in July. The manufactured melodrama and the vetting process are supposed to provide suspense. And the standards for the selections are very general to none at all. The loosely defined guidelines, often determined on the fly, usually involve geographic balance, a number of electoral votes, experience, shoring up a weakness at the top of the ticket or a combination of all of the above and then some.

But rapidly changing demographics have added a new set of considerations to the vice presidential profile this season as both parties try to accommodate the Crayola mosaic that America is becoming. Ethnicity, gender, religion and broad acceptance across a platform of interest groups and social issues matter more today than the calculus of electoral votes when, in fact, with the right choice one begets the other. (Sexual orientation might be too fine a point for many voters to accept for national office at this stage.)

Thus, there are speculative matchups that range from the wildly preposterous to the ideally impractical and the simply doesn’t-make-sense variety. What most handicappers ignore is this: no presidential candidate will choose a running mate who will subsume, or overshadow, the top of the ticket. So, for example, anyone who believes Hillary Clinton will pick Sen. Elizabeth Warren has overlooked the obvious. First, why double the gender appeal when one is enough and makes the point. Second, Warren has a constituency of her own and broader appeal than Clinton and could eventually be troublesome by rallying progressives to her cause in policy differences with Clinton. Third, Warren is naturally independent with an agenda of her own that would be a problematic barrier between a president and a vice president. Fourth, A Warren vice presidential candidacy wouldn’t be novel: Geraldine Ferraro was Walter Mondale’s running mate in 1984. Finally, it’s a good guess that Warren doesn’t want the job or the risk of the Clinton family stain to besmirch her.

Ditto Bernie Sanders, whom the talking heads seem fond of pairing with Clinton as a consolation prize for a campaign well-run and almost won. Sanders is his own man with a devoted following of millions of voters and a won-lost record that nearly matches Clinton’s. This immediately makes him an internal threat and a wild-card understudy whose loyalty is more to his cause than to his patron-candidate. Besides, Sanders consorts with such reckless incendiaries as Cornel West, the black professor/rapper who belittles President Barack Obama, Clinton’s political new best friend. Again, Sanders no doubt would reject the offer, too.

Warren and Sanders both have fiercely loyal young and progressive supporters that Clinton desperately needs. But with Warren and Sanders unlikely choices and disposed of, Clinton will probably cast her eye toward the Democratic party’s two largest and most loyal constituencies and those where the Republican party is weakest—blacks and Hispanics. The most notable candidates for vice president among Hispanics are the Castro brothers—Julian Castro, secretary of HUD and former mayor of San Antonio, and Joaquin Castro, member of Congress, as well as Rep. Xavier Becerra, of California. Add to the list Sen. Tim Kaine, of Virginia and Former Gov. Martin O’Malley, of Maryland. And among blacks, Sen. Corey Booker, of New Jersey, is front and center as is former Massachusetts Gov. Deval Patrick. But hey, America’s already done the black thing.

The Republican grab bag is more noteworthy for its contrasting whiteness as well as for those who are declining consideration for whatever reason. Begin with the party’s Hispanic poster boy, Marco Rubio, who has deflected feelers about the vice presidency on a Trump ticket with the brush-off that he has other fish to fry. But the GOP bench is deep and broad, a collection that includes ins, outs, winners and many losers—Gov. Christ Christie, of New Jersey; Gov. Nikki Haley, of South Carolina; Gov. Scott Walker, of Wisconsin; Sen. Joni Ernst, of Iowa; Sen. Bob Corker, of Tennessee; Sen. Kelly Ayotte, of New Hampshire; former House Speaker Newt Gingrich, among many others. The trick on the Republican side is to find someone willing to accept the pairing with the mercurial Donald Trump, who could wind up being the Barry Goldwater of 2016. Nobody even remembers poor old Bill Miller, Goldwater’s running- mate.

Vice presidents are full of surprises. There have been celebrated successes among vice presidents who became more than silent partners to the men they served. Harry S. Truman took command of World War II upon FDR’s death and ended the war with his epic decision to drop the atomic bomb on Hiroshima. And Lyndon Johnson became one of the most alternately acclaimed and despised of contemporary presidents after succeeding the slain John F. Kennedy. Johnson discovered that it was impossible to simultaneously finance a war on poverty at home and an unwinnable war on communism abroad. Yet Johnson enacted Kennedy’s New Frontier program, his own Great Society program as well as sweeping civil and voting rights reforms for which he’s honored to this day.