Voting for Gary Johnson Will Change Nothing

You've got two parties to choose from. That's it. 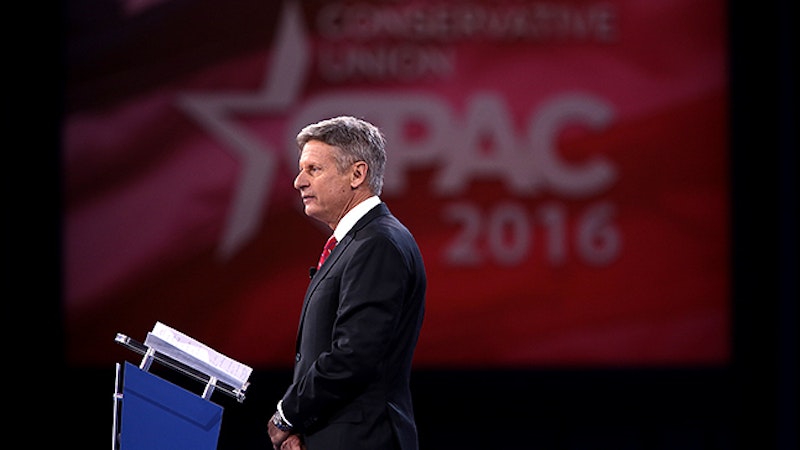 For those committed to ideological purity, whether it’s socialism, environmentalism or libertarianism, the United States’ political system is an exercise in frustration and disappointment. America's two major parties have become more ideologically polarized over the last decades, but they remain coalitions of convenience between religious conservative and business elites and war hawks, or between unions and black people and war hawks, as the case may be. Their ideologies are not, and are not meant to be, especially coherent, much less ideologically pure. Consistent principled commitment is not on the agenda.

Understandably, people who long for consistent principled commitment would like to find another option. Regular Reason contributor Robby Soave believes he's found one in the third party candidacy of Libertarian Party nominee Gary Johnson. Johnson, Soave points out, was a successful governor of New Mexico. He's running on a consistent libertarian platform of cutting taxes, reforming schools (by busting unions, though Soave doesn't quite come out and say so), privatization, and decriminalizing drugs. Johnson, Soave concludes, is a fine example of "the libertarian philosophy that government should leave people alone."

Soave goes on to run through some of the usual arguments made for third party candidates. The Founders never intended there to be political parties in the first place; they wanted voters to cast their ballots on the basis of merit, not faction. "The most important thing any voter can do is vote for the person who best embodies his or her ideals," Soave declares, "whether or not that candidate has a good chance at winning the White House."

America has only two major parties for a reason, and it's not because, as Soave suggests, talking heads have bamboozled the public into thinking that they must vote for the lesser of two evils. Rather, the United States has only two major parties because the founders created a system in which third parties are mostly irrelevant—and in which, therefore, voting third party is, for anyone with an ounce of pragmatism, a waste of a vote.

Soave's right that this was not what the founders meant to do… but before Washington's second term had ended, it was clear that it's what they had done. Parliamentary systems allow for coalition politics and coalition governments, which means that it makes sense to have parties devoted to particular issues or interest groups. If we had a parliamentary system, Gary Johnson's libertarians could conceivably be the balance of power between a conservative party and a liberal party; then voting for Johnson would give libertarians more power to support a libertarian platform via a coalition government.

But the founders rejected a parliamentary system. Instead, we have a system in which the chief executive is directly elected. And that means that voting for Johnson will not in any material way advance libertarian policy principles or goals, because he’s not the representative of one of the two major parties, and his chances of winning the presidency are almost nil.

So, if you want to advance libertarian principles, what do you do? You look at the Democratic and Republican candidates, and decide which of the two is most likely to be best on the issues you care about. There are currently two people who have a chance to be president. Which do you think is better? That's the choice our system offers. You can take it, or you can opt out.  Opting out isn't immoral—but it's not especially moral, either. Nor is it a way to "celebrate choice" as Soave oddly suggests.

Libertarians of course love to see every decision as a smorgasbord of consumer jouissance. But our political system isn't designed that way, and there's nothing virtuous about pretending that it is. Third parties in the U.S. are for most purposes, irrelevant—except once every 150 years or so, when one of the main parties collapses, and someone else gets an opportunity to take over.

The GOP is undoubtedly a mess; maybe the libertarians really will have their moment in the next decade. But if they do, it will mean that they become part of the two party system. And if libertarians want to be one of the two main parties, they'd better start thinking more pragmatically about party politics and coalition building. A third party that doesn't understand the structures that keep third parties down in the U.S. is unlikely to be ready when its opportunity rolls around.