Nobody Got Hurt, Okay?

Be grateful for the little things. 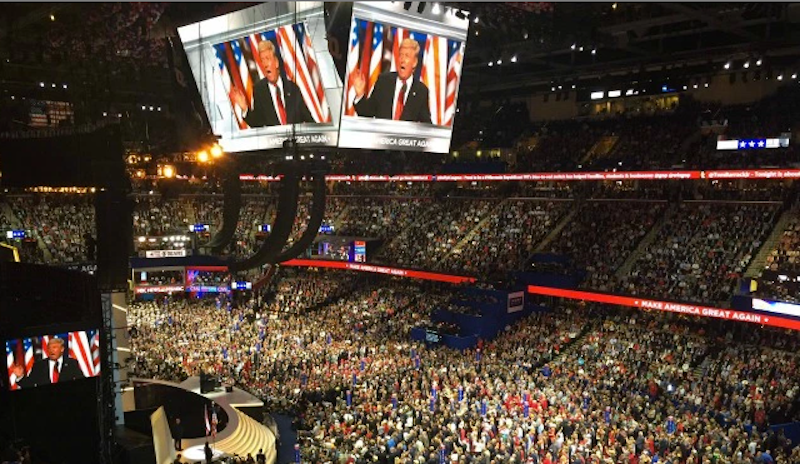 “In big sections of the mezzanine, row upon row of red-backed seats stood mostly vacant,” The New York Times reported. Too bad, since the paper was describing the moment when Donald Trump became the Republican nominee. Still, I used to be worried that spectator seats at the GOP convention would boil over with Trump fans looking to smack delegates. Republican voters headed off that possibility by means of a timely compliance. No contested convention, no turmoil.

Nor did police crack heads outside the Quicken Loans Arena, nor did lunatics shoot at police officers. Given recent headlines and what a Times reporter called the “dozens of niche groups that flooded into Cleveland,” this comes as great news. Inside the arena, things were just as non-sanguinary. Delegates, the Times said, “bustle about with good-natured cheer, many sporting outlandish hats shaped like Christmas trees or elephants.” Politico also noted the “tipsy Trump delegates and partiers in their floppy elephant hats.” When reporters write about funny hats that means no blood has been spilled.

Of course, there were the convention’s unfortunate marquee events: the first day’s battle over rules, Melania’s first-night display of plagiarism, the Trump team’s attempts to deny the plagiarism, and the granting of a primetime slot to Ted Cruz without knowing if he’d endorse the candidate. (As it turned out, Cruz had decided not to.) Joni Ernst’s speech had to go past 11 p.m., out of primetime, because other speakers went on too long. Also, the big screen behind the stage appeared to short out while Ted Cruz spoke. “This was the most shambolically mis-run convention in memory,” wrote David Brooks. At Bloomberg, Francis Wilkinson called the get-together “a fiasco. Incompetence is everywhere.”

The missing spectators got to Wilkinson. “Seats throughout the arena are empty in prime time,” he wrote. Byron York, who likes the GOP about as much as anyone, was bothered too. He wrote that “the excitement level seemed lower and significant numbers of seats remained empty, even during the prime-time parts of the program.” The Quicken Loans Arena wasn’t deserted, but attendance appeared soft. The Times: “It was a little easier to get tickets to concerts in Cleveland, a little easier to get bumped up to the premium hotel rooms.”

Paul Singer, big-time GOP donor, stayed away. But Stanley Hubbard and Foster Friess, jolly billionaires who have backed their share of vanquished Reagan wanna-bes, did show up, and so did Singer’s man of affairs. Even after the Germans took over, Rome stayed a place where senators wrote Latin verse and bought and sold vineyards. In the same way, civilization continues at the Republican convention. “For people who operate in and around government, you can’t not be here,” says lawyer Eric J. Tanenblatt. The Times says the “longtime ally of the Bush family” belongs to the law firm that hosted a talk by Newt Gingrich on how to make money off of military and infrastructure spending under President Trump. The audience was lobbyists and the talk took place “in an oak-paneled room at the Union Club,” which sounds fancy. Elsewhere, a lobbying firm threw a barbecue for delegates and gave away stickers reading “Make Lobbying Great Again.” One also reads that, just before the convention, Trump’s advisers helped kill an attempt to keep lobbyists from serving on the Republican National Committee.

“I think it could be a landslide,” says big Foster Friess, looking ahead. “Donald Trump has the ability to reach all the plumbers and carpenters and factory workers who usually vote Democratic.” In the meantime, nobody’s getting killed and the Republican Party is open for business. No, civilization isn’t what it used to be, but what is?