Who is Mystery Man Fethullah Gülen?

Mysterious, wealthy Muslim preacher living in Pennsylvania may have a secret agenda. 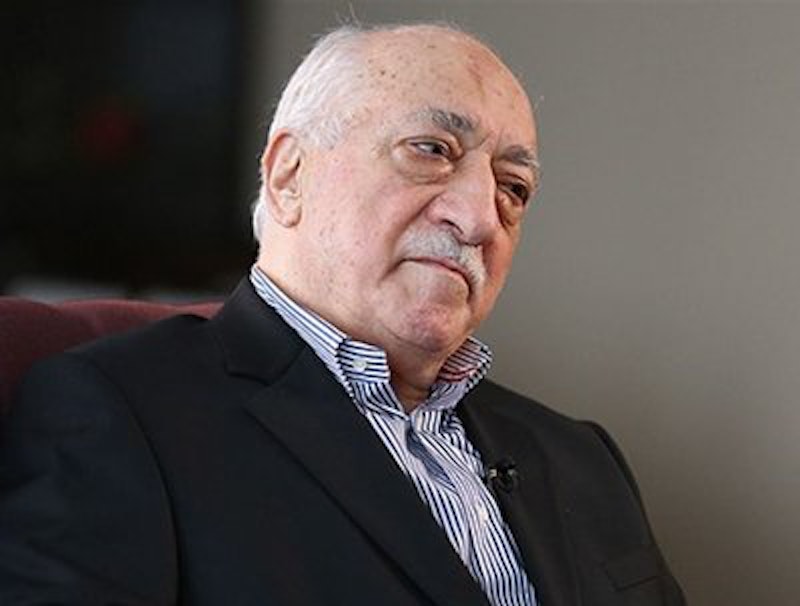 Turkey's Foreign Minister informed the U.S. that relations between Ankara and Washington will sour if the U.S. doesn't extradite an elderly, ailing Muslim cleric who resides in Pennsylvania's Pocono Mountains. The Turkish government is claiming that Fethullah Gülen, erstwhile pal of Turkish President Recep Tayyip Erdogan, is the brains behind the nation’s recent failed coup attempt, an assertion the Turkish preacher emphatically denies. In fact, he’s suggested Erdogan may have engineered a fake coup to facilitate the consolidation of his own power, which isn’t inconceivable.

The reclusive Gülen, purportedly worth $25 billion, is the world's most influential Muslim leader who people know nothing about. If not for the bizarre coup attempt (its perpetrators took over Turkish television stations but left social media alone), few people would even recognize his name. The cleric is a mystery man with five million followers worldwide, and his “Gulenist” movement lacks transparency. Its finances, motivations, and hierarchy are shrouded in mystery. To some, Gülen is an “Islamist supremacist,” while to others he's a “moderate Muslim.” It all depends, as often is the case on the topic of Islam, which lens you're looking through.

The Gülenist movement, known as “Hizmet,” controls a worldwide network of schools and a business conglomerate that includes a newspaper, bank, charities, and the largest trade association in Turkey. Gülen calls for non-violence in conflict resolution and promotes inter-faith dialogue and the belief that Islam should embrace modern science and learn from the West.

Gülen's progressivism, while other Muslim leaders remain intractable hardliners, has earned him the label of “moderate” in the West. While his millions of disciples compare their preacher to Gandhi and Martin Luther King Jr., there's skepticism about his motives and practices. As for the approximately 160 Gülen movement charter schools in the U.S., they do not teach Islam, as they’re taxpayer-funded. These schools focus on math, science, and technology, and do it so well that most have waiting lists of students wanting to enroll.

Some suspect that these schools are used to identify students who’d be effective proselytizers for Islam. Many of the teachers are brought in from Turkey, even though there are plenty of qualified American teachers available. There are charges that Gülen schools are used for the purposes of immigration fraud, and that Turkish teachers—some of whom speak English poorly—have been forced to kick back substantial portions of their salaries to the Gülen movement. A USA Today investigation revealed that Gülenist groups improperly funded as many as 200 trips to Turkey for members of Congress, beginning in 2008.

It’s easy to see the proliferation of Gülenist schools as a positive development for the U.S., especially if you're not aware of certain details. After all, our K-12 math and science education programs compare unfavorably to many other nations, so the schools are filling an important gap. A less trusting person might be inclined to doubt that a fabulously wealthy Muslim preacher has moved to the U.S. out of pure altruism. The Netherlands, a nation that embraces multiculturalism, has moved to cut off its Gülen schools’ funding out of concern for their negative societal effects.

A secretly-recorded speech given by Gülen offers valuable insights into the religious leader’s hidden motivations, and reveals his playbook for quietly infiltrating the highest levels of Turkish leadership. In his talk, he exhorted his adherents to “move in the arteries of the system without anyone noticing your existence until you reach all the power centers.” He concluded by saying that he'd expressed his thoughts in confidence, asking his audience to keep his grand plan to end Turkey’s nearly century-old secularism a secret.

Gülen knows how to direct “stealth jihad” in Turkey, so it's hardly inconceivable he'd do it here in the U.S. This is what the Muslim Brotherhood has in mind, as a document found in the home of Ismael Elbarasse, founder of Virginia's Dar Al-Hijrah mosque and a member of the Muslim Brotherhood’s Palestine Committee, demonstrated. This document calls for “civilization jihad” aimed at “destroying the Western Civilization from within.”

Gülen’s reputation as a “moderate” in the West gives him cover. He’s anti-violent and says Muslims can learn from the West. This positions him perfectly to carry out a sub rosa Islamist agenda, if that’s actually his plan. People who criticize such an outwardly moderate leader are often called crazy or xenophobic, which helps him if he has an agenda of expanding Islam’s influence in American society. The U.S. should be very careful about giving in to Erdogan’s demand to extradite Gülen, as he's produced no strong evidence of wrongdoing and it's likely he's just looking to eliminate his main rival, but now that Gülen’s name is out there, it's an opportunity to give his secretive operation more scrutiny.