A raucous first night in Philadelphia. 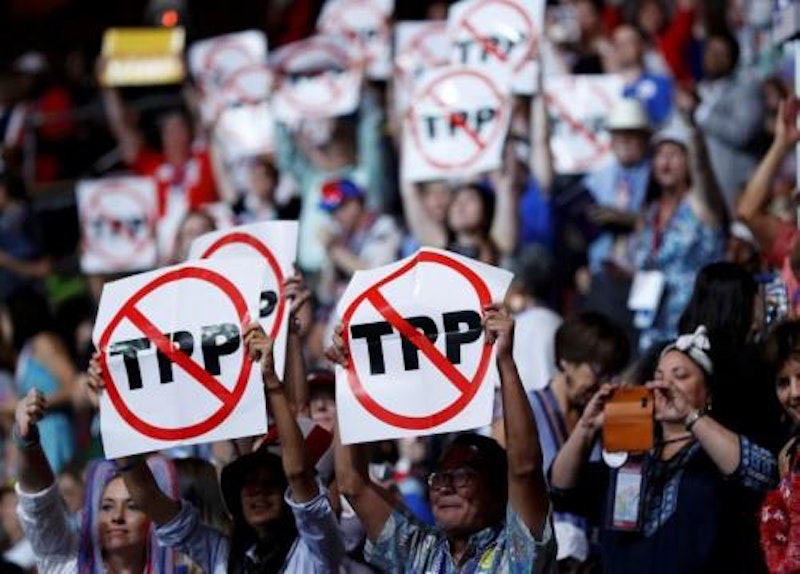 “We trusted you,” voices chanted, sounding near the stage. Elizabeth Warren and her smile soldiered on. She’d just said she was going to vote for Hillary Clinton. The chant lasted about half a minute, which is a good length of time for not so many voices—a dozen?—to keep punching out the syllables. The perpetrators had planned and waited, I suppose. “We trusted you” has a break in the middle, the drop from “trus” to “ted,” that keeps the words from flying out of the throat. People don’t fall into chanting a phrase like that, they make a point of it. The syllables launched at Sen. Warren sounded square and firm as bricks, which is rare for group utterance. Those people really wanted to say those words.

“Bernie” was the main thing the larger crowd had to say. Through most of the Democrats’ first night in Philadelphia, that particular sound came and went, dropping on the heads of occasional speakers as it gathered mass. So did booing. The booing’s mass was never as great, but now and then the two sounds together seemed about to clog the air. Who was going to speak, the person trapped at the podium or some swaths of angry delegates on the floor? As it turned out, the person at the podium. Still, viewers at home might wonder if anybody was in charge. Jonathan Chait fretted that the shouters “dominated the entire day. It was a testament to the power of a fanatical, disruptive minority.”

The noise buffeted Al Franken and Sarah Silverman as they filled time before Paul Simon. “To the ‘Bernie or Bust’ people, you’re being ridiculous,” Silverman announced, and there followed what may have been the biggest cheer of the night. Most of the arena seemed to join in, and for a moment the Berniacs couldn’t be heard. But they regrouped. They were in this for the long haul, meaning about six minutes total as the Franken-Silverman unity act kept their chins up. Then everyone fell quiet. On stage stepped Paul Simon, waxy and box-like, a graceful but stumpy old man who was drawn by Charles Addams. He played “Bridge Over Troubled Water” (unity again) and the crowd became a vast and fairly happy audience. A double line of delegates could be seen out on the floor, members holding hands like a pair of chains and swaying, one chain this way and the other that. The camera caught them, and a close-up showed a black hand in a white hand. From what I remember, the white hand belonged to a man, and the black hand to a woman, and these two delegates looked as you might expect two delegates on the floor to look: like middle-aged schlubs about as good or bad as most other workaday adults to be found in the U.S.

At last the evening’s climax arrived. Bernie Sanders stepped forth. Cheers rose up and stayed in the air, and the crowd made his name chug away like the bass line for their roar. He launched into his speech in his usual manner, as if dictating to a stone mason at the other end of a wind tunnel. “Hillary Clinton must become the next president of the United States,” he said about 15 minutes in. Cheers broke out, but so did a round of “Bernie” chants. He listed triumphs: Clinton and the party had come around on the minimum wage, the public option, tuition, breaking up big Wall Street banks. The platform, he said, “calls for strong oppo-zih-shunn to job-killing… free trade agreements… like the TPP.”

Then he added this ad lib: “We have got to make sure the TPP does not get to the floor of the Congress in the lame-duck session.” There followed a cheer that stood out against the rest of the noise. It was a cousin of the cheer that had greeted Sarah Silverman telling off the Berniacs. On a noisy evening two of the biggest noises were directed against left-wing diehards and the Trans-Pacific Partnership, the trade agreement the Democratic Party helped put in place to keep the world neo-liberal. Figure out that combination and you’ll have a line on the Democrats post-Obama. They’re figuring it out too, of course. Odds are the process will involve a lot of noise.