The Occupy Wall Street movement is stirring up the same kind of classism that plagues Great Britain. 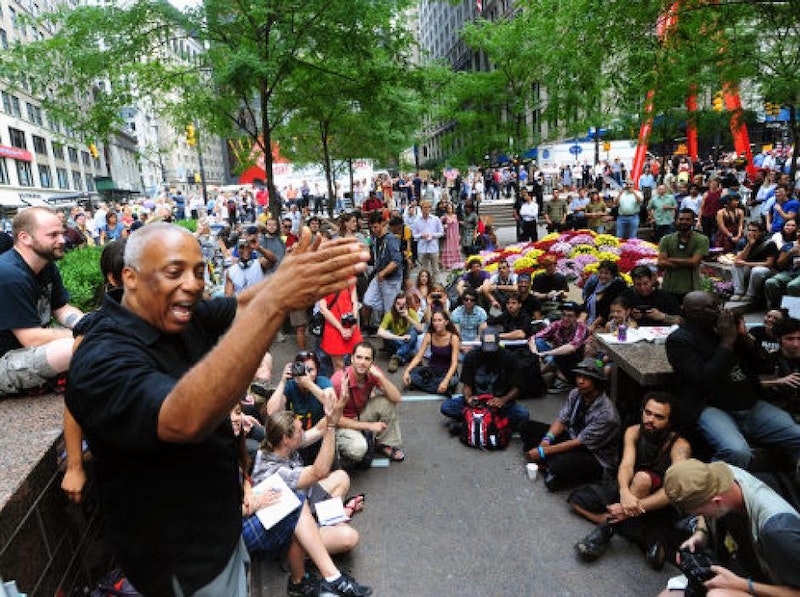 It is difficult to determine what identifies the failure or success of the Occupy Wall Street movement, since the goals are implied, but hardly defined. It’s safe to say the end product of these rallies will not be any sweeping change to America’s free-enterprise system. Chances are, the protests will gain enough steam to elicit acknowledgement from politicians pandering along the campaign trail, and then any bill proposed will be quickly deemed impractical and left for dead on Capitol Hill. Pleased with the smaller victories, ever-hungrier protesters will realize it’s time to find a job and leave their posts in Lower Manhattan. Americans should be more concerned, rather, about the protests laying a foundation for something far more pernicious to freedom and economic liberty—a class war that metastasizes even as the protests unwind. When grievances are poorly defined, as seems to be the case with OWS, they run the risk of being lumped together as “class issues.” Such has been the case for centuries in England, and despite enjoying many cultural and political similarities with its onetime rulers and current partners in a “special” relationship, America has not endured any sort of class warfare, by comparison.

If you were raised in the United States, it’s possible you’ve never heard of a “toff,” “chav,” “rah,” or “pike.” All are pejoratives across England describing class, family background, and whether or not a person acts according to how he “should” based on his class. A toff, for example, descends from wealthy landowners, might be mocked for a distinctive regal accent, and perhaps has a hyphenated last name representing the unification of two overlord families at some point in the past. On the other hand, a “chav” hails from a working-class background, speaks in a Cockney or regional accent, and might be derided for wearing high-end clothing unbefitting of his “class.” Friends of mine from England describe traveling to America as a “liberating” experience because folks do not immediately pass a class judgment on them based on an accent or “look” apart from the obvious fact that they’re English. Within Great Britain are dozens of accents that a lifelong Brit can identify with a specific region, class, education, or upbringing.

Having spent a year teaching at Eton College, long seen as Britain’s (and more recently, the world’s) academy for the royalty, ruling elite, aristocracy, and business leaders, I gained a unique insight to the class hatred that resonates across England. On field trips we were advised to never advertise that we were from Eton College for fear of harassment or vandalism. In sports matches against other area schools, we dealt with more than a number of provocations at the hands of an opponent who wanted to beat up an Etonian. When at restaurants and pubs, friends would “roughen” up their accents for fear of having their food tampered.

In May of 2010, Eton alumnus David Cameron was elected Prime Minister (Eton has educated nearly one in every three British Prime Ministers) and avoided associations with his Alma Mater at all costs. The media obsession with his Eton schooling seemed to make headlines each day, and when provoked to discuss his “privileged” education, Cameron would bashfully explain that his family simply thought it would be a great educational opportunity. Cameron has yet to visit Eton since beginning his campaign and taking office. Within the legislative arena, taxation, social welfare, and many other topics require walking on eggshells as class concerns and fears of exploitation envelop Parliament, and anybody deemed insensitive to these issues becomes unelectable. Other times, class warfare can become vulgar, as witnessed in a video released this month from an anarchist group that marched into Eton and shouted at schoolboys to “behold their future executioners.”

These resentments, of course, descend from a long period of a feudal, hierarchical system that by design, has not existed in America. For example, a lower-class man can become rich in England, but never upper class within his lifetime. Stateside, if a man becomes rich, he can rather easily become associated with an “upper” class. Terms in America’s founding documents such as “all men are created equal… with certain unalienable Rights … Life, Liberty and the pursuit of Happiness,” are not a coincidence or a whim. The words are highly deliberate and carefully placed to protect against classist hierarchies that the Founders observed in Europe. While America required decades to ensure that skin color didn’t preclude an individual from this protection, the United States has mostly been spared a legacy of “classism.” When shaping policy, American politicians may use terms such as “middle class,” but on a person-to-person level, judgments and distinctions between “classes” scarcely exist by comparison. While it may seem that there is class distinction and notions of "old money" in America, its pervasiveness holds no candle to the definitive classes in Britain.

An enduring class war is nasty, and one that Americans must resist, despite how easy and tempting it might be in an economic downturn. Although English class issues have roots in a feudalist and monarchical past, what’s emerged from Zuccotti Park is a combative, neo-Marxist “them versus us” attitude that represents similar discontent and should be recognized as inherently un-American resentments. With no straightforward policy target comes frustration toward arbitrary groups (“Wall Street”), and a feeling of exploitation that is the driving force behind class tensions in Europe. For the sake of liberty, optimism, and social mobility, such assumptions and classism must continue to have no place in the United States.