Case is Made, Time is Right

Maryland Gov. Martin O'Malley (D) could be the perfect candidate to take a run at Obama in 2012. 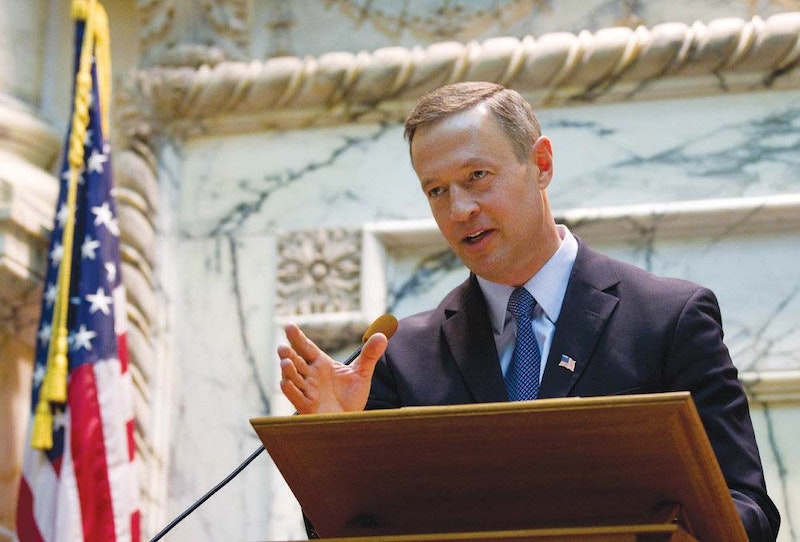 If Maryland’s Gov. Martin O’Malley (D) is as ruthlessly ambitious as his critics claim, 2012 should be his year to run for president to satisfy his lust for higher office. The Democrat in the Oval Office is weak and gasping in the polls, though still more popular than Congress. President Obama couldn’t get his jobs bill through Congress, where Republicans run the House and control the Senate with the procedural filibuster. Polls reveal that every top tier Republican candidate for president defeats Obama in the early trial heats. Obama has been portrayed as a loner at the top who doesn’t relate well to people and is often uncomfortable with voters at the rope line, although it doesn’t appear that way on television. Much of the Democratic establishment—members of Congress who must run for reelection, the business community, the professional left, certain black activists—is disenchanted with Obama. And Obama is surrounded by a weak staff and cabinet, except for Hillary Clinton, who can’t seem to get the job done. The positives: Obama’s a powerful speaker with a prepared text and he can raise $1 billion in campaign funds, although fundraising—especially from Wall Street—could morph into a negative drag if the youthful protesters in dozens of cities make their point: The rules of politics are the rules of the marketplace.

Enemies to the left of him, enemies to the right of him and Obama’s support collapsing in the center, the prescription is perfect for the upwardly-striving O’Malley to enter the race for president. Such behavior would be no aberration. O’Malley’s done it before on a lesser scale. In 1999, he stepped into the mayoral race between two black candidates, Lawrence Bell, his crime-busting buddy, and Carl Stokes. O’Malley split the black vote and captured City Hall, a white mayor in a city that’s more than two-thirds black. He vaulted over his two opponents, of course, when it was discovered that Stokes had faked an education and Bell had purchased a wardrobe of designer threads out of his campaign checkbook. O’Malley has won repeatedly, as mayor and governor, with as much as 90 percent of the black vote in a state that has the largest black population, 38 percent, outside the Deep South. Obama tops that, though, with 95 percent of the black vote nationally in 2008. But, then, 20 percent of voters polled consistently admit they dislike Obama because he’s black. O’Malley defeated a popular Republican, Robert L. Ehrlich Jr., twice—in 2010 by 14 points, the largest margin racked up by any Democratic candidate for governor in the country while Republicans were sweeping into office elsewhere. In 2002, there was an unsubstantiated rumor that O’Malley demurred on running for governor against Lt. Gov. Kathleen Kennedy Townsend after the Kennedy family threatened to wreck his political career if he did. The rumor was never proven.

And now, O’Malley is at the apogee of his state career and, according to detractors, aiming still higher. Now is his chance. O’Malley is chairman of the Democratic Governors’ Association, its roster now reduced to 20 but still nonetheless a passport to the omniscient talking-head shows and a gasbag pulpit from which to raise funds and preach the party manifesto. Other recent governors who’ve won resume upgrades to the White House include Jimmy Carter, Ronald Reagan, Bill Clinton and George W. Bush. The revered FDR ascended to the presidency from the New York governorship. Even Maryland’s outcast governor, Spiro T. Agnew, advanced to a bribe-beat away from the presidency. By contrast, Obama is the first U.S. senator to go directly to the presidency since John F. Kennedy in 1960. So the nation right now might be hungering for another governor, given the affection for Reagan on the right and Clinton on the left. Mitt Romney, the predictable Republican nominee by default, is a former governor as are two other GOP governors, Rick Perry of Texas and Jon Huntsman of Utah, candidates for president.

The late columnist Molly Ivins observed that “I long since decided that if the candidate doesn’t have some Elvis to him, he ain’t gonna make it.” O’Malley is all Elvis. Obama is none. O’Malley could take his guitar and his band on the road and wow the ladies with his smooth good looks and muscle shirt, as he has done across Maryland many times. He’d play especially well to the youthful Birkenstock crowd at Zuccotti Park and other demonstration outposts. O’Malley could leave Obama fumbling for words if the Teleprompter ever went dead. And therein lies the difference between the two. O’Malley can relate to people as he has done with his “kitchen table” chats. And he’s a very able improvisational speaker, even better than he is with a script where he tends to lose control of tone and tempo and devolve into a sing-song-y twang. Obama is precisely the opposite. He soars with a script and sputters with the ad-lib. The voters have caught on to the prompter gig with the help of Republican and late-night comedy jibes.

O’Malley would be the perfect fit for the Oval Office: central casting appearance, attractive wife who’s a judge, four handsome children and Catholic to boot. That’s been done before, so we won’t have to worry about President O’Malley telling the Pope what to do. He could apply “StateStat” to the federal government to calm down the Tea Party wing of the GOP. O’Malley would bring to the national stage an impressive record, too, solid on liberal social issues such as pro-choice, same-sex marriage, the environment, labor issues, sound fiscal management and not a hint of scandal or corruption in all his years in public office. Obama has had several impressive foreign affairs achievements—the snuffing of Osama Bin Laden, the drone-killing of Anwar al-Awlaki, the disrupting of a terrorist assassination plot on U.S. soil and the dispatching of Libyan Dictator Moamar Gaddafi. But O’Malley’s buffing up his foreign policy portfolio with a November trade mission to India. And if he needs to display some Maryland toughness, he can always invade tiny Delaware to protest their toll booths on I-95. O’Malley has been a strong supporter of Obama and his agenda (after he endorsed Hillary Clinton for president in 2008), but in politics it’s no sin to change your mind. Obama would understand the switch if O’Malley decided to declare his candidacy for president. Besides, Obama doesn’t subscribe to the survival law of politics “Don’t get mad, get even.” Obama prefers to sit and stew and come up with a compromise.

As for assembling a campaign, O’Malley’s brother, Peter, has proven several times over than he can make one tick like a taxi meter on a rainy day. Of course, Peter will have to take leave of his job as Baltimore Mayor Stephanie Rawlings-Blake’s chief of staff just as he did as chairman of the Maryland Democratic Party to move to City Hall. Money’s no problem, either. O’Malley raised more than $15 million for his last campaign for governor of a pismire state like Maryland. As chairman of the DGA, the reach is longer and wider in a nation of 300 million that seems to be seeking an alternative to Obama.

Opportunity, they say, is when luck meets preparation. And luck like this doesn’t come around very often. There’s nowhere for O’Malley to go in the U.S. Senate. And he sure wouldn’t want to run for the House of Representatives from the redistricting map he’s just drawn. The White House in 2016 is another matter. If O’Malley passes up this chance and Obama wins reelection, the presidency will be an open seat the next time around and there’ll be more candidates professing their bona fides than there are Republican pretenders for 2012. Best of all, if O’Malley loses he’s still governor until 2014. Which brings up another consideration: The GOP can’t seem to settle on a candidate even though Mitt Romney now appears the solid choice by dint of simple perseverance (he’s been campaigning for six years.)

The case is made and the time is right. It may be now or never for O’Malley, or at least his best chance to aspire to the singular office that matches his ambition. Or maybe he’d like to wait until 2016 to run against his Republican nemesis, New Jersey Gov. Chris Christie. If O’Malley passes up the chance in 2012, he may not be as blindly ambitious as his detractors say.