And how you can write its epitaph. 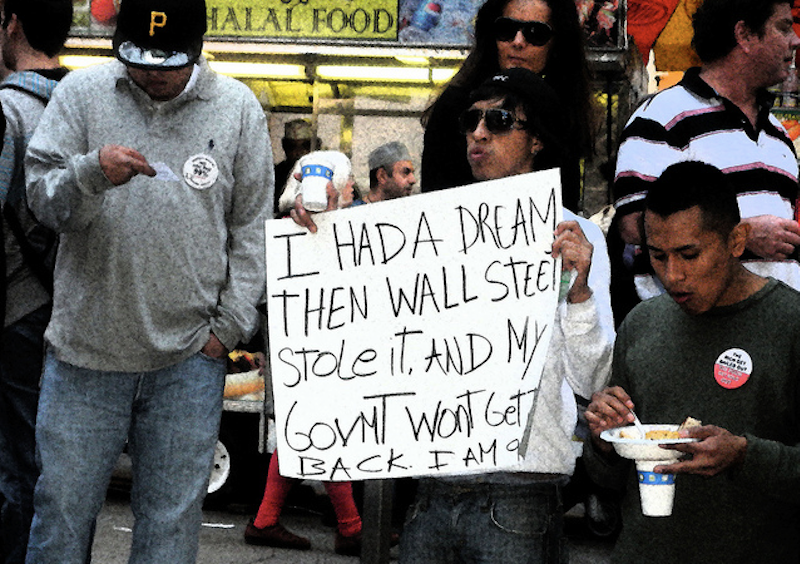 I’ve always done everything I was “supposed” to.

I got a job at 16, I went to college, and I got my degree. After college, I came home and worked. I never drank or abused illegal substances. I’ve never patronized prostitutes or driven more than 10 miles per hour over the speed limit. I have always done everything I was supposed to do in order to attain the fabled American Dream: work hard, remain honest, and you’ll do fine.

While I was sitting in a meandering digital film production class, during which the woefully under-qualified professor struggled for two hours to properly render a clip, airplanes hit the Twin Towers. After class let out, I walked to the dining hall to grab a sandwich, and crowds of people were silently staring up at television sets which the school had peppered throughout the buildings for announcements and/or entertainment. I walked home through a quiet, shocked campus, and I wrote. It was a long passage of reaction, but the essence was this: “Don’t change what you’re doing, or they’ve won.”

During the weeks and years that followed, we were poisoned by the one thing that could cripple the American Dream: pervasive uncertainty. When I graduated from college, I came home. I went back to work. I looked for better work. I didn’t find it, or I found it and it crumbled away before it became meaningfully gainful.

While I’m completely willing to take the blame for some of this (an addiction to Batman, dating a few enormous mistakes, choosing the wrong major), I’m the product of a wide range of different factors that figure against financial success. I live in an area that holds the honor of having one of the highest costs of living in the United States, due to its one-hour-by-train proximity to Manhattan. We couple this with the questionable benefit of being absolutely rural. We may see deer wandering the yards on a daily basis, but this doesn’t compensate for the complete lack of proximity to anything financially beneficial. Purchasing a car is essential to maintaining a job, since walking or biking along miles of winding, shoulder-less roads is a death sentence. We don’t believe in sidewalks. And despite the $30,000+ cost of living, you’ll be very hard pressed to find a job that pays half of that, even if you’re college-educated and work your ass off. So, I picked up freelance job after freelance job, and now, I work inconsistent 18-hour days and barely scrape 60 percent of what I need to survive: entrepreneurship born of necessity.

I don’t have time to stand on Wall Street and yell about things. I don’t have an iPhone to snap photos of the event. The math of college plus car plus life expenses equals an ever-growing hole. I cannot possibly work any harder to attain a balance between debt and wealth. It’s a lifestyle which has cost me friends and spiritual peace, but it’s a choice I made because I believed that this was the “right thing” to do.

Sure, I’ve dreamed of dropping everything and running away from it all, but as someone raised to always, unerringly do the “right thing,” I’m not entirely certain how to tell myself that blowing off car, student loan and credit card payments is okay—even for a few months while I “resituate.” I’m not built for uncertainty. I’m built for establishing a strong foundation in hard work and dedication. I’m built for the American Dream, so I continue to work a fulltime job, and come home to an ever-changing mess of freelance jobs at which I design icons for travel websites which arrange trips I could not possibly afford, or turn a photograph of an ice crusher into a graphic for an instruction manual for some corporation somewhere.

Wall Street protesters: I know what you’re getting at, because I am one of you. I know the math, and how we were spit out of college into a largely unsustainable system. I also know that you’re using the wrong language: my grandfather cannot fathom the disparity between the cost of rent and the average paycheck, nor can he understand that simply changing jobs isn’t an option. I cling to a job which I absolutely despise because there are no options, and I consider myself lucky to be working at all. Demeaned, disappointed, harassed and probably growing an anger tumor in my brain, but lucky. As someone with only one parent, I don’t have family wealth, but I have a roof I stay under while I figure out what the next step is.

Protesters, get it together. Please. Holly Van Voast, standing on a soapbox and toplessly proclaiming that you’re a “freakazoid gender-bending entertainer” bears no fucking relevance to what is being communicated, and it’s a disservice to those who are trying to be taken seriously. Put your hipster iPhones away and attain a voice. Do not hold up signs which alternately say “Overthrow Capitalism!” and “Forgive my student loans!” and “Everything sucks!” I agree with you, things need to change. Throwing a disorganized tantrum is not the answer. Leaving Zuccotti Park in an “unsanitary condition” and being forced out so that the city can clean up after you lends absolutely no credence to the idea that you are entitled children who want other people to give you handouts. I mean, I know you’re not, but clean your fucking room, guys.

We’re stuck in uncertainty. We’re stuck in a moral place where there is no longer a “right thing” to do, because “right by the world” and “right by ourselves” do not usually match up. You have the power and the attention, now use it responsibly.