It could be in his New York Times contract. 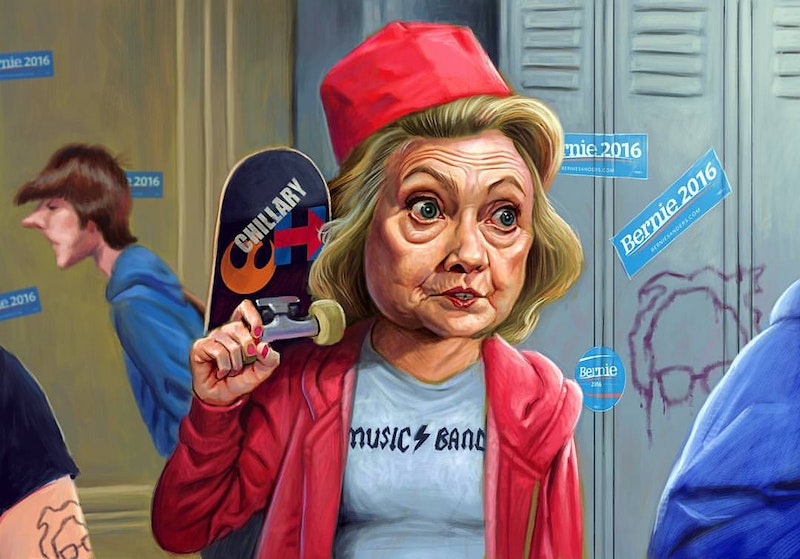 Let me tell you the story of journo named Nick, went shilling for Hillary while holding his prick. Oh dear! Is that offensive? Is the Internet lynch mob going to nail me for some real or imagined sexist crime? Idk, but even though my awesomeness is not in question, if I can humble brag, it’s incontrovertible that most sheeple won’t click on this article, since it’d be five minutes they could never get back. So yeah, truth is, I have no intention of staying classy, not that there’s anything wrong with that, amirite?

Kristof on April 24th, made a weak-tea attempt at providing New York Times readers with a teachable moment, claiming that –H is simply a politician of the modern age, and he fears “the ‘Crooked Hillary’ narrative will drag on much more than the facts warrant.” Breaking news, Nick: the #NeverHillary folks, you know, the ordinary voters that you never shake hands with, just like the Trumpkins and their leader, will carry on that “narrative” until Hillary’s drawn her last breath. Oh, and Nick, you asshat you, here’s something else I found sad but yuuuugggge: you didn’t even have the decency, unlike President Obama—taking time away from telling British citizens how to manage their economy—to even mention the Purple One in your column! Like, shame shame shame, hey shame on you, if you can’t dance too!

I just cracked myself up thinking about that Shirley & Co. hit from 1975. Pure LMAO sugar rush! And speaking of sugar: Want! Just like every morning, on Twitter, once I tell everyone I’m “awake for some reason,” I always make a mention of coffee coffee coffee. Because that’s original, and that’s something you just can’t make up! I mean, fuck, it’s not even The Onion!

Anyhoo, back to African savior Nick K., who goes on and on about –H just doing her thang, tryin’ to get elected, and hell, even if it was “nuts” that she took hundreds of thousands of simoleons for boilerplate speeches to Goldman Sachs (where half her cabinet will come from, if, God Save Us, she’s elected) and a bunch of other free-spending companies, well, that’s not so bad, not “crooked,” since it’s politics as usual. And fuckin’ a, doesn’t that put Citizens United in the quicksand! Naturally, he never mentions Benghazi, which happened on her watch as Secretary of State, probs because she endured hours of grilling before Congress. The stamina! Oh, but Attention Must Be Paid, which Oregon/Harvard Nick surely does not, to Hil’s little misadventure with the Swiss company UBS, for which, while SecState, logging all those miles, helped out with a little IRS problema. And not long after that, First Husband Hopeful Bill—and he ain’t nothin’ but a hound dog, preach!—wangled a $1.5 million fee for a chat the bank sponsored. But no, a quid pro quo was not on the table, because that would be sad, and besides, Nick quoted his former Times colleague Jill Abramson (although he doesn’t identify her previous job as the daily’s Executive Editor till she was shit-canned in 2014) from a Guardian article in which Jilly said Hilly “is fundamentally honest and trustworthy.”

I’m in! Not. Oh, not to get all serious on you, but isn’t it like, so really, really stupid that so many media hacks still refer to the Times as “The Gray Lady?" Holy moly, you roly-poly sycophants, the front page has flashed color photos for eons, and shouldn’t that undeserved honorific been retired, say, when James—sorry, Scotty—Reston was taking steno from JFK back in the day of those life-affirming and no-way chintzy Camelot years?

No, Nick just ain’t no baller, and I face-palmed when reading his tortured quasi-defense of Hil keeping her emails on a private server; the Kristof gist about this is “Oops.” And the following paragraphs is a must-read. Totally super-required reading: “The bottom line: If she had followed the rules and used her official email address, Vladimir Putin might actually have had a leg up on reading her correspondence.” I shit you not, and will not walk this back. That’s like saying if Bill hadn’t boned Monica, sexual indiscretions by politicians would still be a stigma! And we were so much older in the 90s, we’re free and liberated now.

I have no idea if The Bern reads The Times on Sundays—haven’t broken bread with him recently—but if he did read Nick’s sketchy defense of Hil, I’m sure the NYC/Vermonter would just shake his damn head. But I swear that heaven-sent birdie that landed on his podium several weeks ago would be… sad.