Richard Cohen Knows You're Not Okay With Biracial Couples 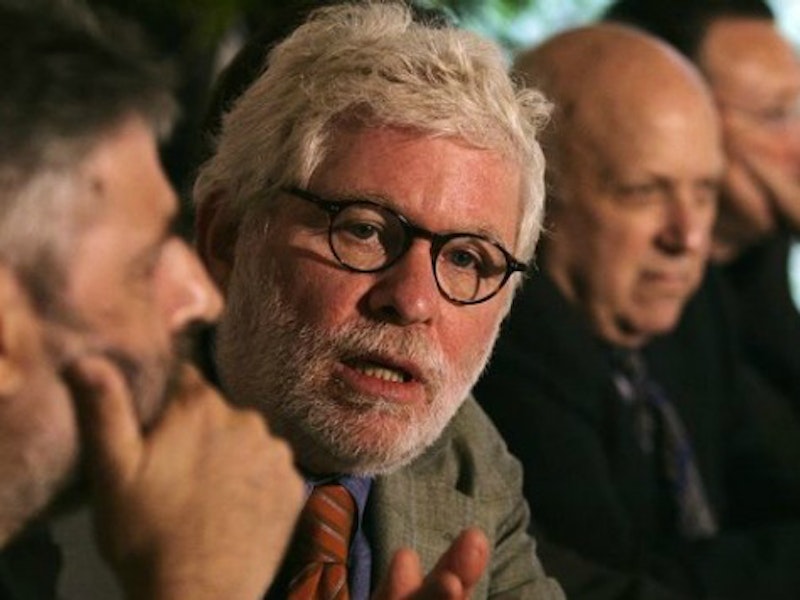 Richard Cohen of The Washington Post says “gag reflex” sums up the response of old-fashioned people when they see a black-white couple. He doesn't say this is his view, only theirs, but neither does he seem bothered by it. Being physically disgusted by the interracial is just one of those things, like getting tired of talking the local language when you're abroad—that would seem to be his vibe.

To live up to “gag reflex,” people would have to get sick to their stomachs at the sight of black spouse with white spouse. That's quite a standard, even for people on the right who dislike Barack Obama. There's some out there who can meet that standard, and they post comments at Fox Nation. But I think that, among the old-fashioned, the standard reaction to biracialism is a double take followed by a desperate need to be polite. If so, this response overlaps with that of many people who are not especially old-fashioned. They may even have voted for Obama and now remind themselves that the health care website can still get it together.

For a lot of whites across the country (and maybe blacks, but I couldn't speak for them), the sight of black and white can be a jolt. The jolt may be large or very small or somewhere in between, depending on the white in question. No matter the degree, what happens is that the white feels his or her ground rules hitting a bump. The horizon rears up and then settles back in place. The white, carrying on, tries not to act stupid.

Many whites don't experience this jolt at all. People say the young ones are free of such stuff, which is great news. The older whites can nurse ourselves along with the thought that we're learning and can always do better. Then there are the commenters at Fox Nation, who hate, and then there's Richard Cohen, who sticks his hands in his pockets, tilts his hairdo back and hauls out “gag reflex” as the term for what hapless whites feel when seeing people who love each other but don't share a color.

Nora Ephron's terrible weakness. She was friends with Richard Cohen and Ron Rosenbaum, an idiot who made a big noise in 1980s magazine journalism by banging his stomach like a kettle drum. Cohen is supposed to be the Billy Crystal character in When Harry Met Sally. Rosenbaum is supposed to be the Greg Kinnear character in You've Got Mail. Yes, the woman who made You've Got Mail could have admired an idiot, even two. But these idiots? Nora Ephron was better at having opinions than they were. She didn't write dumb columns or hyped-up pseudo-articles. She wrote some of the best magazine journalism of the 1960s and 70s, a very good time for magazine writing. But she sat across restaurant tables as Cohen and Rosenbaum blatted out their smart talk and jeux d'esprit. Horribly, the thought arises that she liked the guys' cologne and their self-assurance. Those fucking man-talkers. Fuck.

We're laughing at the sight of a man—that poor father—being broken. We're laughing at the sight of an artist—George C. Scott—trying to produce art. (Scott had finesse but no sense of proportion, so he produced performances that looked like real behavior but swollen, like a prize pumpkin the size of a tractor.) Hardcore was meant to be a classic; now it's just a pile of bones to pick through. But what a result. Pair Scott's would-be greatness with Jack and Jill and you get a laugh so hard that it paralyzes.

This is the magic of the Internet, digital technology and the endless modern production of spectacle. To be French about the matter, human integrity is so diced up that we can laugh at what looks like torture. But I don't know if this situation is good or bad. I just know that I liked the clip and then decided I'd better do some explaining to myself.