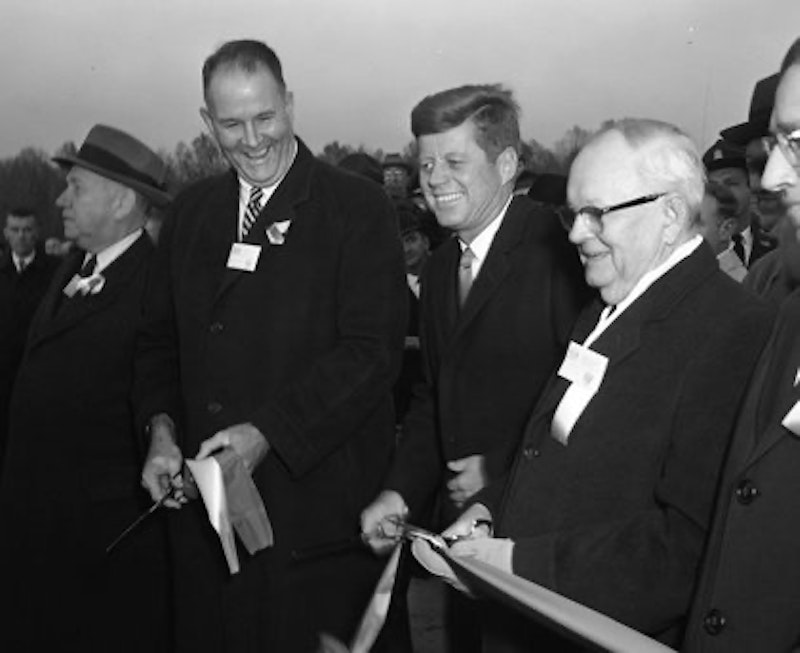 The newsroom was quiet that Friday afternoon a half century ago. Paychecks were cashed, most editions had been put to bed and all that lay ahead was quitting time and a weekend full of nubile promise.

At a precise point that early afternoon, a pubescent copy girl—the word intern had not yet been introduced in newsrooms—tapped me on the shoulder with a hesitant finger and said: “Mr. DeFilippo, the president’s been shot.”

“Come on, for Chrissake. It’s Friday afternoon. Stop kidding around,” I said.

“I’m not kidding, sir. It’s coming over the wires now.”

In those distant days, before computers, satellites and laser transmitters, cold type, the Internet, social media, laptops and cell phones, newsrooms were equipped with teletype machines that spewed enough words every day to make thousands of gallons of alphabet soup. On this day, five bells rang on the machine, signaling urgency.

I sprinted back to the wire room and there it was among the clatter, the first UPI bulletin: “Three shots were fired at President Kennedy’s motorcade today in downtown Dallas.”

“Buck Becker, get the hell back here right away,” I shouted across the room to the news editor.

Twenty minutes later, the News American had an historic EXTRA edition in print, one of the last EXTRAs to appear on the streets of Baltimore, long a collector’s item. An enlargement hung on display in a window next to the South St. entrance to the News American building before the paper said goodbye to Baltimore in 1986 and became a parking lot.

The AP Bulletin followed a few seconds behind UPI: “President Kennedy was shot today just as his motorcade left downtown Dallas. Mrs. Kennedy jumped up and grabbed Mr. Kennedy. She cried, Oh, no!”

Everyone who was alive 50 years ago—and a majority of today’s Americans weren’t—remembers where they were, what they were doing, what their reaction was when they heard the news that funereal afternoon. Recalling precisely when it finally sank in is more difficult.

There have been shelves of books about Kennedy, the man and the president, and just as many volumes devoted to the manic deed that claimed his life. At least half dozen biopics are cluttering the airwaves this memorial season attempting to make sense of it all.

John F. Kennedy. He was a metaphor more than a man—Kennedyesque. The name still evokes a mythic quality, a youthful magic and an unfulfilled life. Wit, charm, grace, style, intellect, politics—what Italians call sprezzatura or, better, perhaps, bella figura. The fascination continues. Any word except Camelot, which was a confection served up in collaboration between Jacqueline Kennedy and the journalist Theodore White.

A great president? Remembering Kennedy without tears suggests perhaps not. The best and the brightest of his administration mired him in Vietnam. His signature issues, civil rights and a tax cut, languished in Congress. A beloved President? No doubt about it. Shrine-like memorials across the nation bear his name—schools, bridges, highways, libraries, auditoriums and cultural centers.

Kennedy had a warm and memorable association with Maryland that began in 1959 and culminated with his sister, Eunice, and her husband, R. Sargent Shriver, settling permanently in Maryland in the early 1970s, and his niece, Kathleen Kennedy Townsend, daughter of brother Robert, serving as Maryland’s lieutenant governor from 1995-2003. Another niece, Maria Shriver, learned the TV trade at Baltimore’s WJZ-TV before she became a network star and she lived at the Village of Cross Keys where she was courted by her future (and now estranged) husband, Arnold Schwarzenegger.

In 1959, as a candidate for the presidential nomination, Kennedy had marched into the office of Gov, Millard J. Tawes (D) and announced that he intended to run in the state’s (then) preferential primary (basically a runoff election). Tawes had earlier told Kennedy to stay out of Maryland because the state’s Democratic hierarchs were committed to Lyndon B. Johnson for president.

Kennedy told Tawes that he was running whether the governor liked it or not. At a later meeting, Robert Kennedy, his brother’s enforcer, threatened Tawes with reprisals if Maryland’s Democratic machinery failed to align with Kennedy’s candidacy. Kennedy, riding a swell of Catholic votes, swept the state.

During the Maryland primary, the Kennedy campaign established a headquarters office in the long-gone Emerson Hotel, on Calvert St. As election day approached, a Kennedy operative, Joseph Kernan, nicknamed the “undertaker” after his profession, arrived from Massachusetts to dispense the requisite walk-around money.

Philip Goodman, a City Council member who later became Baltimore’s mayor, had pledged a $2000 contribution to the Kennedy campaign. When Goodman approached Kernan for his requested share of the campaign funny money, Goodman said he needed $2500 to cover his Northwest Baltimore precincts. “Fine,” Kernan said. “Here’s five hundred dollars, and with the two thousand you’ve pledged, that makes twenty-five hundred.”

Kennedy’s final visit to Maryland was on Nov. 14, 1963, eight days before he was gunned down in Dallas. Then, he stood beside Tawes to dedicate the expressway—I-95—across Northeastern Maryland that now bears his name, the last public works project in the United States that Kennedy dedicated.

President Kennedy’s son, John-John, then age two, stole the show at the White House meeting in the Oval Office when the invitation to dedicate the highway was extended and accepted.

The president took great pride in introducing John-John to his three distinguished guests, Gov. Tawes, Sen. Daniel B. Brewster (D-MD) and Gov. Elbert N. Carvell (D), of Delaware. John-John, with equal delight, shook hands with each of the officials, then scampered back to his favorite play-space under his father’s desk.

The youngster soon emerged again, walked up to each of the guests, and to a roomful of grins engaged in another round of handshakes.

A few minutes later, when John-John popped up for still a third shake of hands, it was President Kennedy who shattered the awesomeness of the office by chiding his son:

“That will be enough, John-John. It’s not time to start campaigning yet.”

And with a laugh and a gentle pat, the president ushered the boy out of the office.

One of Kennedy’s great and mischievous pleasures was providing audience relief on solemn occasions with a parody of his own rise to the presidency. His commencement address to the 785 Naval Academy graduates on June 7, 1961, was no exception:

“In the past, I have had some slight contact with the service, though I never did reach the state of professional and physical perfection where I could hope anyone would ever mistake me for an Annapolis graduate. I know that you are possibly warned during your days here not to mix your naval career in politics. I should point out, however, on the other side, that my rather rapid rise from a reserve lieutenant of uncertain standing to your commander in-chief has been because I did not follow that very good advice.”

And as the line of new ensigns passed before him for congratulatory handshakes, President Kennedy roared with laughter when one ensign, Jared P. Kennedy, stepped front and center.

No one in Maryland enjoyed a more convivial political rapport with President Kennedy than former Mayor Thomas D’Alesandro Jr. The legendary East Baltimore politician played the same brand of outrageous politics the president had inherited from his grandfather “Honey Fitz” and the Irish precincts of Boston.

Only Big Tommy could have succeeded with such aplomb at greeting the president of the United States with, “Hello, Chief,” before a statewide television audience at the Fifth Regiment Armory on Oct. 10, 1962. And when the president began his speech, he sealed the pact of mutual regard by addressing Big Tommy, who was master of ceremonies, as “Member of the Renegotiations Board D’Alesandro.” (President Kennedy had appointed D’Alesandro to the obscure three-member Federal Renegotiations Board, whose function was to renegotiate federal contracts that were in dispute.)

At the same rally, President Kennedy was 12 minutes late arriving at the armory because his motorcade had been delayed by an estimated 200,000 Baltimoreans who lined the parade route from Patterson Park (where his helicopter landed), across Eastern Ave. to Washington St. to North Ave. to Howard St. Precious Democratic TV time was wasting.

Finally, local officials and candidates finished racing through their speeches. The President stepped up to the camera, smiling almost in mockery of the job he had come to do, and said:

“Never have I heard so many Democrats say so much in so little time.”

At the rally, Kennedy endorsed all incumbent Maryland Democrats for reelection, including Thomas F. Johnson, then congressman from the Eastern Shore. The very next day, Johnson was indicted for conflict of interest following an investigation by the Justice Department into savings and loan irregularities, which was headed by the president’s brother, Attorney General Robert F. Kennedy.

The White House press secretary, Pierre Salinger, responding to a reporter’s phone call the next day for comment and clarification, said the president was unaware that Johnson was about to be indicted when he endorsed the congressman the night before.

Every president is said to have slept somewhere beyond official locations (historically, in Kennedy’s case more often than others), and there was a sign outside an Arbutus restaurant as testimony that John F. Kennedy was among them.

During the 1960 primary campaign, in April, presidential candidate Kennedy was 25 minutes ahead of schedule while campaigning at shopping centers in Baltimore County. Kennedy and his staff decided to stop and eat at the restaurant-home of Mr. and Mrs. Clarence Creamer, at 4921 Leeds Ave.

While the staff ate lunch, Kennedy accepted the Creamers’ hospitality by cat-napping on their sofa for 20 minutes. After he was elected, the Creamers hung a sign on their restaurant wall that said, “The President Slept Here,” along with a framed picture of President Kennedy.

The Creamer house at 4921 Leeds Ave. was later occupied by a janitorial service. The plaque and picture hung in the office of the firm’s vice president.

On Nov. 22, 1963, Walter Cronkite wept, and America wept with him. That all happened 10 presidents ago and America hasn’t shed a tear for another president since.