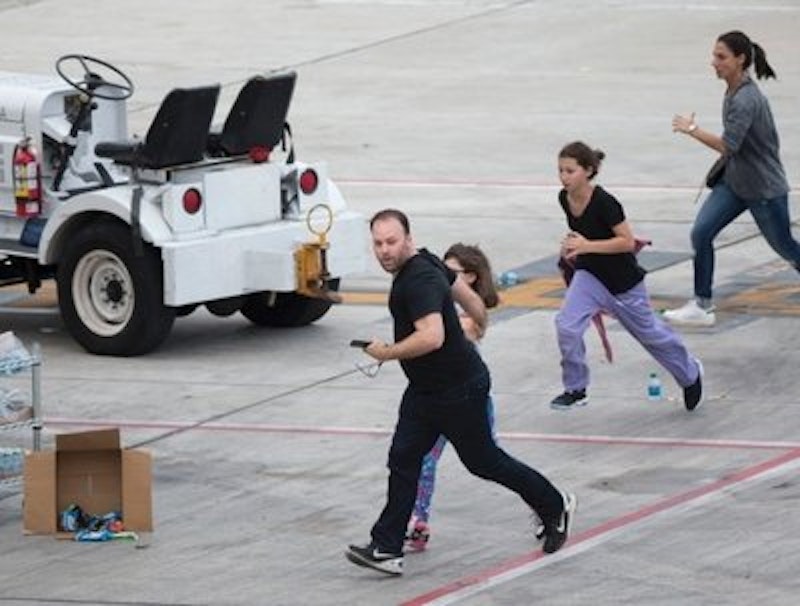 One thing Americans do particularly well is panic. Sometimes our panic is the work of a moment, as we dash about screaming. And sometimes it takes a decade or two to unfold.

The scene last Friday at the Fort Lauderdale airport was really quite something. Estaban Santiago opened fire at the baggage claim, killing five and wounding six. He dropped his gun and surrendered. Only then, after the occasion for it was passed, did the wide-scale hysteria set in, largely within or induced by “the authorities.” Columns of armored vehicles arrived; I had no idea there was this much SWAT in southern Florida. Squads of heavily armored men with automatic weapons ran this way and that, jostling reporters and issuing various contradictory imperatives to bystanders, who ran out onto the tarmac, then back toward the terminal, then under the planes, then out to the hangars, and so on. They did it all afternoon, which was insane.

As always in this situation, one shooter multiplied into three, as people—in particular, the police—startled at their own shadows. Within the blank-faced hysteria of the authorities, the enemy takes on supernatural powers, multiplying and dividing, appearing and disappearing in a series of panic-induced hallucinations. SWAT invaded the parking garage and other terminals in search of phantoms, and started herding people around to avoid non-existent sniper fire.

It was a fully military response, but one with no coordination, proportion, or rationality. Also, no target. It was a panicked response, which is very dangerous. One of these days, the police reaction is going to be worse than the event, and it will slowly become clear who actually shot the bystanders. When you have that much armor and firepower in proximity that many vulnerable bodies and that much irrationality, people are liable to get killed.

Fort Lauderdale was a one-day segment in the ongoing 15-year-long panic known as “the war on terror.” After the 9/11 attacks, the term “homeland” came into vogue, and one front of the war is every town in the United States. In every city in America, there lurks a heavily-armed military force ready to sweep into that city itself. Such a force can be turned to many purposes. It’s extremely disturbing when it’s used on demonstrators: that is, straightforwardly to repress dissent. It’s merely embarrassing when sent as an army to subdue a single mentally ill schlub, already dead or in custody.

The authorities have taken the approach of trying to give themselves an overwhelming advantage in force against any domestic enemy. Obviously, they’re braced for an insurrection or invasion; otherwise their approach makes no sense. They’re armed for a civil war. They've tried to make themselves and their vehicles and their buildings invulnerable. In Fort Lauderdale, they rolled en masse, covered in Kevlar™, to subdue nothing at all. Then they were praised by one another for their physical courage.

I’d like to make a couple of observations about this militarization of American society. First, these systems are armored, but they’re incredibly slow, stupid and costly. The bigger the systems become, the heavier the vehicles and weapons, the more ponderous are their command structures and movements. When you try to make yourself invulnerable, you’re subject to a thousand pinpricks, like a knight with a flea in his armor. A person or group who is nimble or improvisational is miles ahead of them, until the authorities can review the surveillance. And those authorities are in a constant state of freak-out. Any fool could shut down any major American city with a few lumpy backpacks. Anyone who’s willing to be arrested can shut down American aviation.

I'd point out, as well, that more American terrorists were trained to shoot people by the U.S. military than ISIS. Estaban Santiago was a soldier in the war on terror in Iraq, and the Dallas police shooter Micah Johnson served in Afghanistan, for example. These attacks were in some measure created by the systems that were called upon to repress them, and reflected the skills that the system inculcates.

And I’ll also mark my opinion that the American security state is incompatible with the personal freedom and republican form of government with which we are supposedly associated. The “American experiment” was over as soon as Dick Cheney started thrashing about after 9/11. The military strike forces hovering over every major American city are a sign of that.