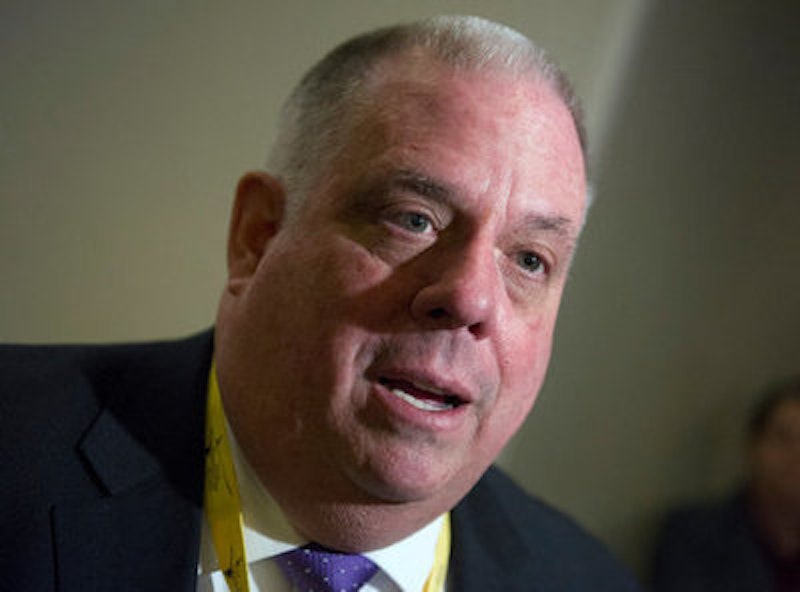 Here’s the conundrum Maryland Democrats face: How can they defeat an enormously popular Republican governor who’s a cancer survivor, an advocate for kids with cancer and who announced that First Dog, “Lexi,”—whom he described as his “best friend”—recently died in his arms at the Governor’s Mansion?

Tough one. But that’s their assignment when the General Assembly convenes this week. And that’s mostly what the 2017 session will be all about—to set the stage for the right candidate to deny Gov. Larry Hogan a second term, the only Republican who might achieve that numerical status since Theodore R. McKeldin in 1950. (Spiro Agnew vacated the office 1969 to become vice president and Robert Ehrlich Jr. was defeated 2006 after one term by Martin O’Malley.) In other words, make the Republican governor look bad, or at least as bad as possible.

Groan at the impolitic thought, if you must, but, like it nor not, much of Hogan’s high standing at 74 percent is based on his appeal as a person more than any substantive accomplishment as an executive. That’d due, in some measure, to the makeup of Maryland and the General Assembly that the state’s demographics have produced. The state, as every political rubbernecker knows, is more than two-one Democratic. That figure is replicated roughly in the State House: In the Senate, there are 33 Democrats and 14 Republicans; in the House of Delegates, there are 124 Democrats and 64 Republicans, leaving very little maneuvering room for Hogan to achieve significant legislative victories to buff up his record. And in another of those curious anomalies, the Maryland General Assembly is far more liberal than the people who elect it.

The 2017 General Assembly convenes at a time of sweeping cultural change and attitudes toward government in Washington. The arrival of Donald Trump as an authoritarian president, along with his assemblage of captains of industry, brings with it the consequence of elections. This, in itself, could provide a dramatic counterpoint to the manner in which Maryland Democrats advance and protect the values and programs for which they have fought and established as a framework for the quality of life in in the state.

Hogan has shrewdly, thus far, avoided most of the cultural wars that had previously torn apart the Republican Party but appear ripe for a revival under Trump and especially his vice president, Mike Pence, the former governor, religious fundamentalist and cultural warrior from Indiana. Hogan did not support or vote for Trump but claims a deep friendship with Pence. What’s more, there’s no telling how much of Washington’s fundamentalist fervor will spill over into Maryland’s Republican ranks and cause Hogan untold grief.

The year 2018 may be a generous gift to Democrats. One approach may be Trump himself as Hogan attempts to ease himself back into the good graces of the White House after his election-year snub. Hogan has already stated that he hopes to ingratiate himself with the Trump Administration in order to secure infrastructure money for Maryland. And the trick for Democrats will be to wrap Trump around Hogan’s neck every time Trump displays his well-known aversion for facts or attempts to dismantle a popular program. Trump has earned more Pinocchios (for misstatements, factual errors and outright lies) from the fact-checkers who award them than any politician in recent history. Such a pincer move could force Hogan to become very partisan to protect his Maryland base. Some of Hogan’s right-wing supporters are still angry over his flippant dismissal of Trump during the campaign.

And here we’re talking about the repeal of Obamacare, limiting abortion, packing more than 100 federal court vacancies with conservatives, wholesale restructuring of Social Security, Medicare and Medicaid, defunding Planned Parenthood and a wish list of other issues that make conservative hearts go pitter-patter. The key here will be what action Maryland Democrats take to fill whatever gaps in social policy Trump and Congressional Republicans might create. If, for instance, federal funding for Planned Parenthood is cut, will the General Assembly provide state funds to continue support of the women’s health care program? The California legislature has hired Former Attorney General Eric Holder to represent its interests in any coming legal battles with the Trump Administration.

The big issue at stake in the 2018 election of a Maryland governor is redistricting. Whichever party wins the governor’s office controls the Congressional and legislative mapmaking in 2022. This could reshape the state for electoral purposes with an inborn advantage. Hogan has already proposed establishment of a non-partisan redistricting commission but Democrats rejected it. (Currently, there’s one Republican among the 10 members of the Maryland Congressional delegation.) With new technology and a series of complicated parliamentary maneuvers, however, legislative leaders surely could find a way to outflank the governor with plans of their own that would protect Democratic majorities.

To begin with, Hogan’s legislative program is likely to be a lean package. He has little money to spare for big-ticket items so he’ll work the fringes with gesture issues. Hogan opens with a $400 million drop-off in revenue projections. He’ll offset the shortfall with cuts and by withholding funds in other areas. Beyond that, he has talked of expanding school vouchers and committing $65 to environmental programs, which advocates argue is way short of needs. The environmental program is separate from the expected fight over whether to expand, extend or make permanent the existing temporary ban on fracking in Maryland.

Hogan has also proposed a jobs creation program for Baltimore which awards a 10-year tax break to new businesses that locate in the city as well as millions for job training. He has not said how much the tax breaks will cost. The program requires General Assembly approval. And there’s the opening day skirmish over roads priorities and who gets to determine them, the governor or the legislature.

So far, only a handful of names have been heard rattling around in Democratic cattle-call for governor—Kevin Kamenetz, executive of Baltimore County; Rushern Baker, executive of Prince George’s County; Del. Maggie McIntosh, of Baltimore; and Tom Perez, outgoing secretary of labor and a candidate for chairman of the Democratic National Committee. The Big Foot candidate hasn’t yet emerged.

In the long view, Assembly Democrats are hoping to use the Trump presidency to restore enthusiasm among the party’s base to assure a massive turnout for the June 2018, primary election. Across the country in November, the failure of young voters, especially young blacks, to turnout is considered among the reasons Hillary Clinton lost the election in rust belt states, even though she won the popular vote nationwide by nearly 2.9 million votes.