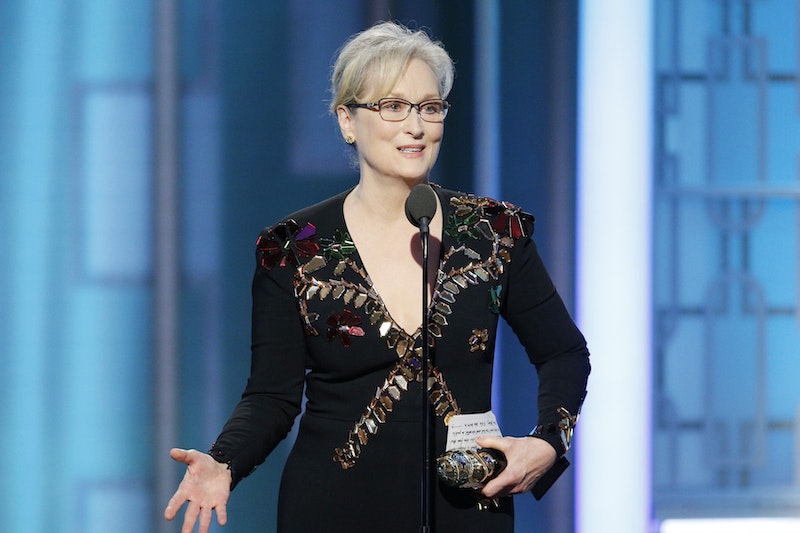 How bad are things? This bad: a movie star just gave a high-minded speech with her voice quivering and that speech was something America needed to hear. The country’s right has dropped us in a situation so cruddy we need somebody to stand up and voice simple, outraged thoughts of the sort that Hollywood liberals come out with. For instance, that anybody who wants to be president really shouldn’t make fun of the handicapped. Meryl Streep made that point the centerpiece of her six minutes onstage at the Golden Globes on Sunday.

Streep also said foreigners are okay, because look at Ruth Negga and Dev Patel, and that the press ought to do its job and not give in to the powerful. This final point, admittedly, will always be controversial. What counts as giving in? And what counts as tendentious sniping via headline and news clip? Whoever the president is, there will always be people who say (perhaps rightly) that he or she is getting raw treatment from the media. Even Streep’s point about foreigners might be expected to kick up argument. I agree with her, but I don’t face competition from foreign writers entering the country. Even if America hadn’t gone Bizarro, there’d be people to take issue with her view. Really, there can’t be a more comfortable place to appreciate foreign workers than on-stage in Hollywood while accepting a lifetime achievement award. Next-most comfortable would be Mark Zuckerberg’s office.

But making fun of the handicapped? We’re in bad waters when somebody needs to say the President-elect should lay off the disabled. Next we’ll have to hear that he shouldn’t kick puppies or slap babies. For now, here’s Streep: “This instinct to humiliate, when it’s modeled by someone in the public platform, by someone powerful, it filters down into everybody’s life, because it kind of gives permission for other people to do the same thing. Disrespect invites disrespect, violence incites violence. And when the powerful use their position to bully others, we all lose.” In other words, the President shouldn’t act like a dick. The President shouldn’t be a mean, arrogant, childish bully.

In a Hollywood movie, the villain would do what the next President did when he talked about that handicapped reporter. In a broad, ham-handed Hollywood movie, maybe one about a ragtag band of underprivileged kids getting bullied by the country club set. Judging by conservative Twitter, we haven’t reached the point where this behavior can be defended straight out. “Meryl Streep, a phenomenal actress, is utterly tedious & pedestrian as a political commentator,” sighs Laura Ingraham, sounding rather superior. But wait. The right has hitched its wagon to Trump. If he makes some more cripple jokes, they’ll decide the problem lies with the handicapped. We’ll be told that regular people have their nerves strained by looking at the non-regular. The right will say Trump’s clearing the air. They’ll say that anybody who doesn’t like it is a snob, somebody who looks down on ordinary Americans and their feelings.

If so, I hope Meryl Streep says something. We’ll need all hands on deck to cope with the wave of cruddiness to come. Even Hollywood liberals.