Another Side of Howard Stern

Stern keeps his audience guessing as his contract negotiations go down to the wire. 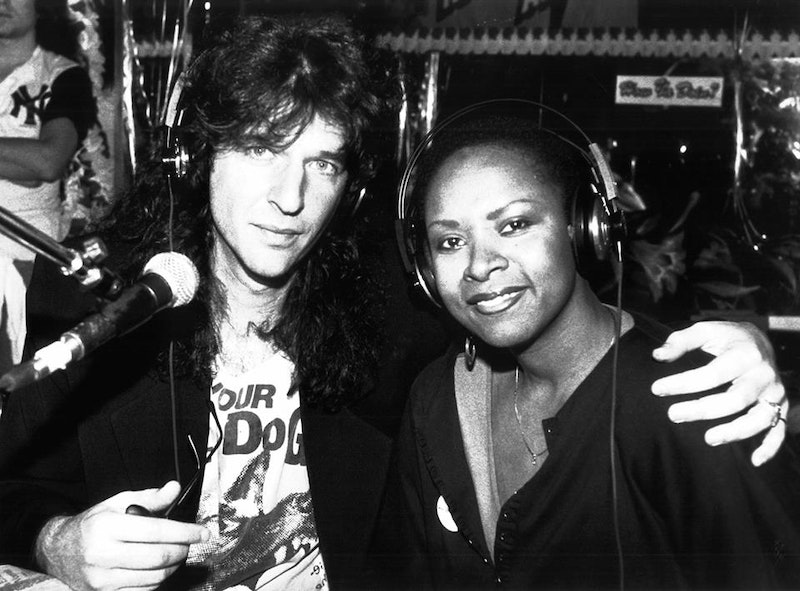 Howard Stern has six shows left before his contract with SiriusXM expires at the end of the year. For the first time in his 36-year career, he’s been coy and mostly mum about his plans—whether he’ll re-sign; move to another company like HBO, Apple, Netflix, or Amazon; or retire altogether. Jokes and asides about going dark and “saying goodbye forever” to his audience are par for the course, but they’ve been few and far between the past couple of years, and there’s been practically no discussion about contract negotiations or plans beyond 2015. Until Monday’s show, I was certain Stern would re-sign with SiriusXM, with a two- or three-year deal and, heaven forbid, fewer shows. He’s already down to three live broadcasts a week—any less makes no sense for SiriusXM, paying Stern $80 million a year since 2011. My biggest fear is a move to TV, with a focus on A-list celebrity interviews and mass layoffs leaving only Howard, Robin, Fred, and Gary. I still believe that Howard Stern is our best living interviewer, but since I wrote that piece in early 2013, my obsession with his show beyond the interviews has bloomed and spread. It isn’t fandom, it’s pure monomania, matched only by my well-documented and ineffable obsession with a certain bitter and bald guitarist.

Being a Howard Stern fan in 2015 is a solitary experience. It’s not that he’s misunderstood or reviled by people my age—he’s irrelevant, out of earshot behind a paywall and rarely in the press. My dad became a fan in 1982, but by the time I was conscious, he’d stopped listening, and I only knew Howard through cultural osmosis. From October 6, 2004, when he announced he was leaving terrestrial radio and moving to satellite, to January 9, 2006 when he finally arrived at Sirius, Howard was inescapable for the last time. It was a powerful political statement—as he said at the time, “Terrestrial radio’s biggest star voluntarily removing himself from the airwaves at the height of his fame […] to make something new. Do we go into the future? Do we make a political statement?” It’s so easy now to forget how uptight and oppressive the FCC and Clear Channel were under the Bush administration. The 15 months between his announcement and his arrival at Sirius were Howard’s last stand, the last era when he was politically potent and culturally omnipresent. Fans know the show has flourished at Sirius, but his audience on satellite has never come close to its peak of 20 million listeners.

It’s been a decade since Howard left terrestrial radio—I was in seventh grade, uninterested but still unable to avoid news reports and opinion pieces on the implications of the move. All I knew were the cultural bullet points: shock jock, Fartman, lesbians, potty humor, sex, sex, sex. I caught bits of the E! show every now and then, but it always bored me—a bunch of guys talking over each other using vernacular and a code that was totally impenetrable. Years go by. In early 2011, I started watching cable news again—I couldn’t take the ridiculous racism and disrespect hawked onto President Obama in his first term, from the birthers to the Tea Party and Joe Wilson’s ignominious cry of “YOU LIE!” during a speech by the President before a joint congressional session. It was too stupid to believe, but after the bizarre 2010 midterms and during the Arab Spring, the media junkie in me relapsed hard. With college and the 10th anniversary of 9/11 looming in the fall, getting stoned and watching the news became a nightly routine as my last semester of high school went by. For whatever reason, Piers Morgan replacing Larry King was appointment viewing, and I was glued to the TV for his second episode with Howard Stern. Naturally, Oprah got the first episode. I don’t remember it.

Piers Morgan has always been an irritating twat, a dilettante, but his pathetic pomp and flamboyant vacuity were the perfect foil for the Howard I now know to show another side of himself to an unfamiliar audience. In a single interview, Howard obliterated my fuzzy and one-dimensional impression of him and hooked me. Howard spoke about the same things that endeared me to Billy Corgan: being a workaholic, the emptiness of fame and success, pervasive and profound dissatisfaction and disappointment abated by nothing; paranoia, neurosis, and giving oneself to work in search of redemption and release. “In an interview on Tuesday's Piers Morgan Tonight, Stern said he knew he had been wildly successful, and said to himself, ‘Really, why am I doing this anymore? It makes me crazy. I hate getting up early in the morning, and I don't particularly like doing the show.’ But, Stern told Morgan, he is ‘driven by a neurotic compulsion’ to do his show.” I immediately connected to his personality and sensibilities: “‘I don't like to go out,’ Stern said. ‘I don't like to leave the house. I like to stay home, but I'm fascinated by human behavior.’”

That fascination is what makes The Howard Stern Show so brilliant: the first reality show, a stream of consciousness document of American discourse in real time, with a revolving door of performers, guests, and staff members anchored by Howard, Robin Quivers, and Fred Norris since 1981. Parables, tragedies, inside jokes, and folklore develop over weeks, months, years—from the silliest of mistakes (Gary “Bababooey” Dell’Abate), to the mundane and practical (Jackie Martling and Stuttering John walking out over contract disputes without any farewell fanfare), forbidden thoughts of and about the mentally ill and physically disabled misfits that society ignores (Wack Packers like Beetlejuice, Hank the Angry Drunken Dwarf, High Pitch Erik, Fred the Elephant Boy, Wendy the Slow Adult, Tan Mom, Evil Dave, Debbie the Pet Lady) the idiosyncrasies, insecurities, and eventual unraveling of KC Armstrong, to the Greek tragedy of Artie Lange, a deeply sad and humbling rise and fall, the best cautionary tale against heroin since Kurt Cobain’s.

The Howard Stern Show is a mirror on the American mind and experience, the most profound soap opera ever produced. Like baseball, it’s about the passage of time, the empty spaces, friendship, and the vast stretches of nothingness punctuated by titanic events both tragic and glorious. No other episode demonstrates this better than their broadcast from September 11, 2001. Two and a half hours in, in the middle of Gary, Stuttering John, and Ralph Cirella giving Howard a locker-room grilling about whether or not he slept with Pamela Anderson, word of the first plane hitting the World Trade Center comes in. What follows is the definitive document of that day in America and especially New York. You’ll learn very little from the television and print coverage, formally measured, civilized, and neutral. It is four hours of horror and venom, of death and destruction and hate and confusion. There is no better time capsule to explain how we were duped into unending and un-winnable wars in the Middle East, and surrendering our rights for the sake of safety.

“DROP THE NUCLEAR BOMB ON THEM! NUCLEAR WAR! NUCLEAR WAR! LOOK WHAT WE DID TO THE JAPANESE. THEY ARE SO GOOD TO US. THEY MAKE US SUSHI AND ELECTRONICS—BUT THEY DON’T SMILE ANYMORE BECAUSE WE BURNED THE SMILES OFF THEIR FACES. THE ARAB WORLD NEEDS TO BE SPANKED LIKE THE BASTARD CHILDREN THEY ARE, AND THEY MUST LEARN THAT THEY ARE OUR DOGS.”

No one wants to acknowledge this is how millions of New Yorkers felt that day, but it is absolutely crucial to our understanding of the last 14 years.

The Howard Stern Show is a study of the American psyche without peer—it’s the impossible dream of Synecdoche, New York’s Caden Cotard achieved: a life-size play about everything. When you wake up every morning and spend four hours listening to the same people on the radio, they become as real and meaningful as friends and family. “My God, that’s me” is the most profound reaction one can have to a work of art. Pleasure and escapism rarely lead to enlightenment and understanding—wish fulfillment will destroy us all. Very few people have been able to simultaneously delight and challenge their audience all while shaping the culture in their image. The Beatles are the only ones who ever came close to changing the consciousness of the world. The next best thing you can hope for as an artist is to leave behind a portrait of the world as you knew it. Howard Stern is a canonical American figure, in line with Mark Twain, F. Scott Fitzgerald and Tom Wolfe: his work has entertained us and provided us with refuge, relief, and insight and will provide context for future generations. His legacy cannot be overstated.

Just as today’s bullet points for John Lennon are “abominable bigot and wife beater,” Howard Stern is still best known in the cultural consciousness for lusting after lesbians and complaining about his penis size. “Isn’t Howard Stern a sex crazed maniac?” “Isn’t he a racist?” “Didn’t he mock AIDS in the 80s?” “Isn’t he a miserable pessimist with no redeeming social value?” Every time I’ve been confronted with questions like this by friends who don’t get my obsession, I come up short. I don’t fully understand what makes Howard’s show so essential to me, and that only makes my fandom grow, as there’s always more to learn, more to watch, and more to hear. Take this piece by Darren Johnson, written for Campus News: “Stern’s show has become pretty much a snoozer; and he only works an average of 2.5 days a week. He no longer can be seen as ‘the future’ of the service.”

Unaware that SiriusXM desperately wants Howard to re-sign, he argues that “Stern is at the end of his contract, and no announcement has been made about his re-signing. Hopefully, the service doesn’t re-sign him—he seems more energetic about fostering kittens with his stylish wife, attending Hamptons celebrity parties and painting bowls of fruit at this point in his life—and instead spends the millions they had been paying Stern on new personnel. Then maybe people under 50 will want to listen to the (former) Stern channels. Bababooey bye-bye.”

Johnson cites the emergence and enormous popularity of free podcasts like WTF with Marc Maron and Serial as evidence that Howard is steering a sinking ship. SiriusXM would be lucky to get him for another three years, let alone five. Howard isn’t retiring—he’ll be in front of a microphone or a camera until he’s deaf, dumb, and blind, and even then he’ll go on, joining the Wack Pack he curated as dementia and decay set in. He can’t spend all day painting and petting his cats. At 61, Howard still comes in every morning at seven shot out of a cannon, especially after he discovered coffee in August. His radio show is revolutionary because millions of people saw themselves and their lives in it, and whether he knows it or not, Howard is still the poet laureate of the American experience and psyche.