No Questions, No Moderators, No Rules 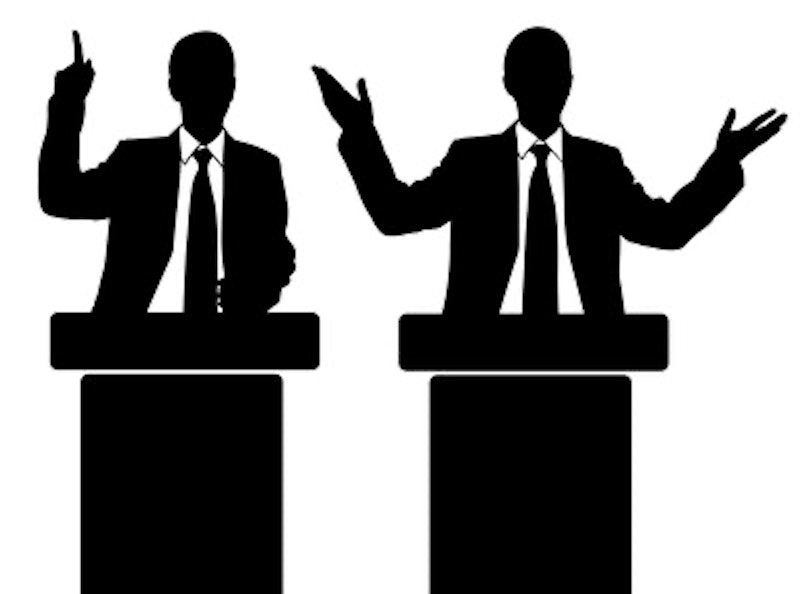 Just have the candidates sit side by side on stage; they'll figure out what to say. Remember, they're against each other, and the fellows are going to go at it somehow. Hard questions will be asked. No need for a frowning little squad of journalists sitting at their spot-lit desks. No need for a buzzer. No need for time keeping, really. The two hours start and then they finish, and in between the candidates make the most of it. They're the ones who think they ought to be president. Well, they can show us why.

That's all we need for a debate: a stage, the candidates and a block of time. The rest is icing dumped atop the cake. Ben Carson's campaign manager was talking about bypassing the networks and putting the debates on YouTube. That's a good idea. We'd lose the light palace sets and the commercial breaks. Of course, no one could trust the candidates to pick their questioners, but that's where my half of the solution comes in. I say no questioners.

Ideally, a free-range debate would take any number of candidates. There would be no overcard or undercard. All 12 or 15 or 20 contenders would march onto the same stage and do whatever they could to get their point across. I admit most people won't go with me on this angle. Maybe I'm being a purist. After all, why not have an undercard? But I'm prepared to stick with the idea of no rules, not even a rule for how many people can take part. In theory you might get enough candidates to fill a good-size subway platform. If so, I'm prepared to see that outcome as a symptom of our present society, and it's just as well that early-season presidential debates should let us see the rash. If moderators are the only things that keep our presidential elections from becoming a flash mob, then get rid of the moderators and see what happens. They're a flimsy restraint anyway.

Downer. I see no reason against free-range debates except that they can never be done. With no moderators, the candidates would be exposed to each other the whole time. Every moment would be high alert, and I bet they don't want that. For their part, viewers would be put off by the nakedness of the proceedings. Without the podiums and the weighty journalists, the debate becomes an egg without its shell. Viewers choose order over formlessness. They don't want people flopping about, strangers trying to make conversation. Show them the goo that is humanity, and viewers want a shell on it pronto: heavy editing for reality show footage, podiums and lights and moderators and rules for real-time action.

Aside from form, there's the weight that the rules and the other trappings provide. They create a kind of pomp, the same kind on display at NBA playoffs. A presidential election ought to be important; so should the stages along the way, even when there are so many. The typical set of a presidential debate announces big doings, and people figure that's as it should be. Finally, the notion of unsupervised existence bothers people. We figure somebody ought to be in charge. Notice that the questioners are called moderators, as if proceedings would overheat without them. Apparently, we think our leaders can't go on air under their own recognizance; they won't behave and manage to sort things out among themselves. Anarchists may find this attitude funny or extremely discouraging.

The reasons above are powerful, but they're no good. Debates are supposed to help us pick candidates. A free-range debate provides the candidates with a maximum of time and confronts them with highly motivated questioners, namely each other. People who wanted to learn what they could about the candidates would naturally gravitate toward this approach. Instead it's been tried just once that I know of (in 1992, between Jerry Brown and Bill Clinton) and has never been considered again. We don't want debates to help us choose, or at least that's not our top reason for having debates. We want a show, we want some ritual, we want reassurance. A lot of invisible reasons come first, and we won't admit they're there. As so often with our politics, we're muddled.