The bastard who planned America. 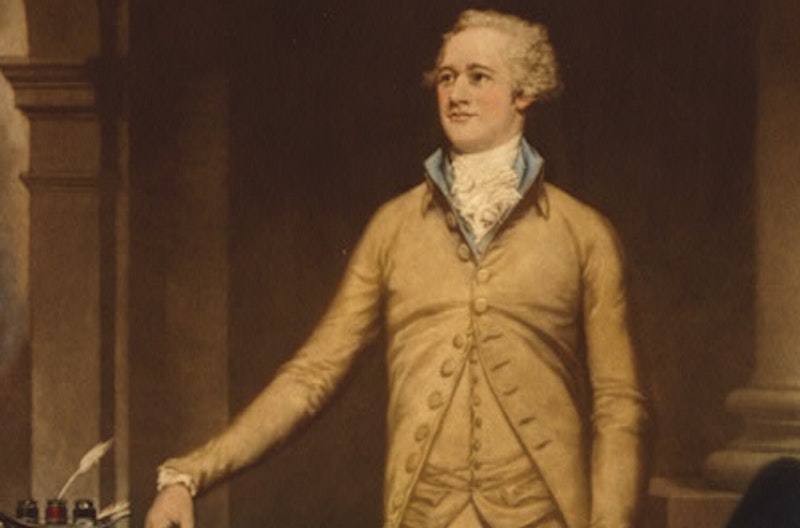 The monthly New York City libertarian gathering called the Junto has seen arguments such as one between Wall Street analyst David Stockman and investor and Junto founder Victor Niederhoffer over whether long-term stock-watchers should be optimistic or, like a growing number of Wall Streeters these days, should be learning prepper and survivalist skills. Not long ago, I wrote of a Junto debate on whether the government should be small or non-existent. Last night, the Junto saw what might be considered the “retro” version of that debate: whether Alexander Hamilton was a hero in the cause of liberty or, as some libertarians contend, the statist, big-government snake in the Revolutionary garden (at least by 18th-century Anti-Federalist standards).

The debaters were Michael Malice, author of the darkly amusing book Dear Reader about North Korea, and popular libertarian historian and podcaster Tom Woods, with Malice defending Hamilton. Malice’s opening gambit was the very pragmatic reminder that Hamilton had risen from Caribbean poverty and abandonment by his father to become a teenage entrepreneur—itself a reminder that the U.S. is the land where people are free to remake themselves.

Hamilton was soon a right-hand man to George Washington—risking his life in the Revolution but also risking it to protect a Tory from an angry mob—and eventually U.S. treasury secretary, helping to popularize arguments in favor of the new Constitution and thereby popularize arguments for liberty itself around the world, with a particular emphasis on putting the world’s new republic on a sound fiscal footing “because he is the one Founder who understood that property rights are absolute,” according to Ayn Rand-citing Malice.

Perhaps more controversially, Malice reminded the Hamilton-averse, more Jeffersonian crowd that Thomas Jefferson was a bit of a nut, still defending the French Revolution long after it had become clear it was all leading to bloodshed and horror—and showing little regard for mundane but vital legal institutions such as financial record-keeping and debt-repayment back in the U.S., all the while dreaming of almost genocidal recurring revolutions aimed at keeping liberty continually renewed.

To Woods, though, it is Hamilton who is, to borrow a phrase from Blofeld, the author of all our pain.

Hamilton, according to Woods, used the Federalist Papers to defend the Constitution on the basis of the strict limits it would purportedly place on the new central government—but promptly began advocating violating those limits once he had helped get the Constitution ratified, urging crony state-capitalist partnerships, a central bank, the use of the army to suppress disobedient states, and taxes as a purported spur (rather than impediment) to industry. Hamilton, claims Woods, was the first to argue for the existence of the vague, creeping penumbra of “general welfare” that yields imprecision in our constitutional legal squabbles to this day, giving comfort to such willy-nilly state-expanders as the New Dealers.

Malice admits Hamilton leaned toward the aristocratic view of the elite’s necessary role relative to the violent mob but makes a good case the mob really is awful. Aghast, Woods argued that Hamilton sounded like a monarchist and “advocates the establishment of the British system within American borders... There is something weird and discordant about that.”

Woods carried the large crowd, many of whom seemed to have come as a result of hearing his podcasts and only 16 percent of whom came in pro-Hamilton according to a survey at the outset. But Malice—armed with a giant quill pen, a continuous PowerPoint presentation of fake Trump tweets denouncing Woods and his native Kansas, and the unexpected introduction of Woods’ wife to vote in the pro-Hamilton faction—certainly made the most entertaining case for Hamilton I’ve seen since that musical that’s all the rage now.

Paradoxically, I came away from it all more conscious of Hamilton’s dangerous flaws but more convinced that even with those blemishes he had already earned his hero status, at a time when neither he nor his revolutionary colleagues could even be sure the young nation would survive, let alone flourish as it has, thanks in no small part to their work.