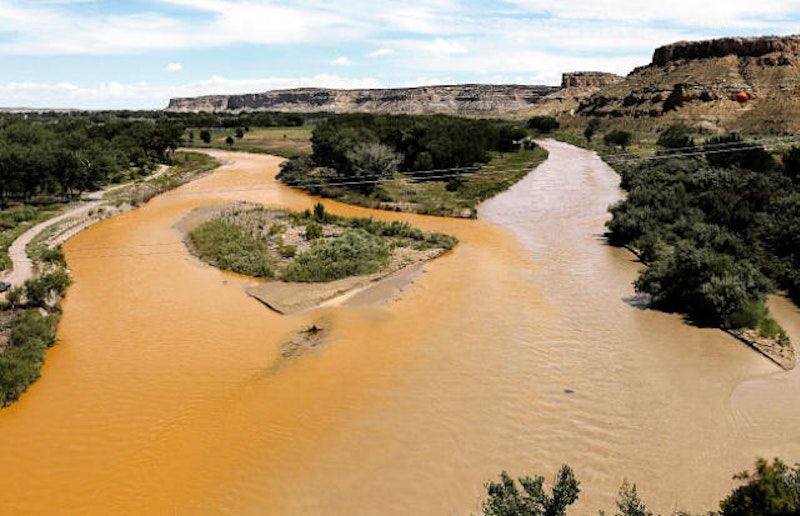 The so-called Environmental Protection Agency will face no fines over some of its regulators accidentally dumping a million gallons of mining waste containing heavy metals, as orange as Donald Trump, into the Animas River in Colorado (and points beyond), potentially poisoning fish and livestock alike.

Needless to say, when some organization that isn’t government causes a disaster like this, there’s outrage and there are calls for harsh punishments, even demands that we fundamentally alter our relationship to the earth and renounce greed, devise a whole new economic system run by Al Gore or someone, that sort of thing.

In this case, I’d imagine activists will say the EPA tried its best. Then, after a period of cognitive dissonance, the activists will find a way to blame capitalism, such as saying that if the whole government were just better funded, it wouldn’t make these mistakes. Or perhaps it will say this is all a side effect of industries exerting too much influence on regulatory agencies.

Since I love the earth and the animals more than the evil jackasses of the left, though, I am not content with these easy answers. I am angry! I demand that the EPA be abolished for its wanton destruction. Who’s with me?

And let us not pretend that this mishap is in no way indicative of the deeper flaws in the system. That which is collectively owned—that is, “owned” by the government—is in effect owned and cared for by no identifiable individual. Of course rivers and the vast tracts of land run by the federal government get neglected. If it were literally your back yard—indeed, any parcel of land you or someone else owned—you’d probably care enough to make sure these things didn’t happen.

You’d want to increase the value of your possessions, at the very least avoid getting sued by someone else if you screwed up in some way that oozed onto adjacent land or into a body of water to which someone (on the shore, or using a certain stretch) had at least partial rights.

If you’re the government, you own a third of the land in the U.S., do virtually nothing with it, parcel out logging and mining permits (even build money-losing roads at taxpayer expense to help the companies get to the trees and mines) with little regard for real costs and benefits, take long lunch breaks and occasional bribes, and then bill the taxpayer when something collapses, explodes, burns down acres, or seeps into a nearby river.

Who cares, after all? No identifiable owner. What’s that, you say? Sell it all so that people become owners, with all the legal responsibility that entails? What are you, a dirty, dirty capitalist who hates the fish and the trees?