It's Worse Than You Thought, Roger Ailes

The boss of Fox News didn't know how angry everyone was. 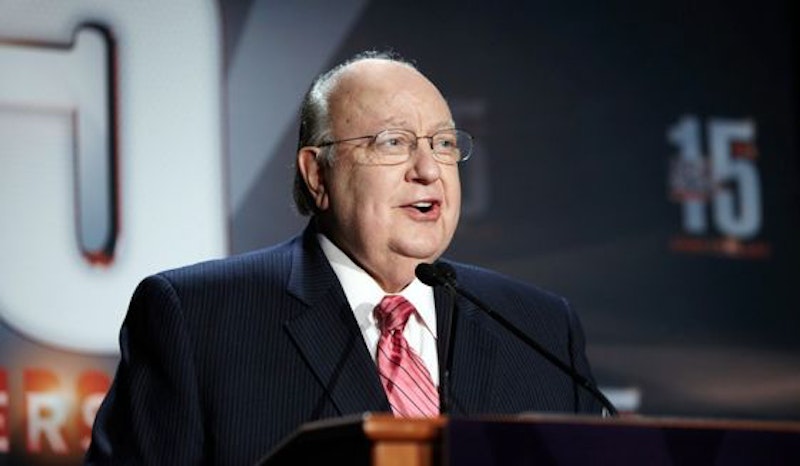 How bad are things on the right? Roger Ailes just kind of apologized to somebody. The boss of Fox News got into a tug of war with Donald Trump, and it looks like a section of the Fox News viewership almost tore away and went with Trump. Political experts from ancient Nixonian sex partier Roger Stone to choirboy technocrat Ezra Klein had pronounced that Trump couldn't win against Fox, the most trusted institution on the right. Turns out that trust on the right has rotted through.

Ailes wasn't apologizing back on Friday. “I don't necessarily do what anybody assumes,” he said the day after the Cleveland debate. “This is an example of that.” He meant the moderators' tough questioning of Trump. But three days later Ailes called Trump, who then tweeted “He is a great guy & assures me that ‘Trump’ will be treated fairly on @FoxNews. His word is always good!” Which sounds like Ailes made promises of good behavior. Ailes presents the talk differently. “We had a blunt but cordial conversation and the air has been cleared,” he said. But no one at Fox has asked for an apology to Megyn Kelly—I mean for Trump's “blood” comment, one of the slobbiest remarks in broadcast history—and instead Trump is welcoming the network off probation. That's how the Trump-Fox dispute has played out.

New York magazine has the scoop about the Ailes call, but it skimps on explaining what made Ailes give. Picking through the account, we find a reference to the “volume of pro-Trump emails from Fox’s loyal viewers” and how this volume “paralyzed” Fox. Well, that must have been a lot of email. The story seems dubious, but something happened. It wasn't pressure from Fox's owner, Rupert Murdoch, who's on record as considering Trump an embarrassment. It wasn't the Koch brothers, who are likewise against Trump. The RNC isn't a Trump partisan, and at any rate it can't make Ailes jump. Apparently the viewers did. After Trump's Cleveland grilling, audience indicators did not come back as expected. It appears they suggested a crisis.

Trump's share of likely Republican primary voters comes to about 20 percent, with some ups and downs. These are people who hate most of the Republicans whose names I’d recognize; they're in the party just because they can't be bothered to leave, or not as yet. Bad enough when they make up a fifth or so of the GOP, but apparently they account for even more of Fox's viewership and feel just as little loyalty to it as to the Republicans. This is news to everybody, including Roger Ailes.

Back on Friday, maybe Ailes thought he had waltzed his old buddy around. Trump the debater had just given Ailes the “highest ratings for any cable news program ever broadcast” (to quote Ezra Klein), and now Trump the post-debater had signed on as chief publicist to Megyn Kelly. A presidential front-runner had nothing better to do than build up the Fox news team's rising star by wailing that she had been too mean. If Ailes wanted a primary campaign with a story, his story now had a villain. Trump whined, he made foul trash talk, and he’d stepped before a crowded arena and menaced a blonde (“I’ve been very nice to you,” he said to Kelly during the debate, “although I could probably maybe not be, based on the way you have treated me”). He had started his campaign at the reality show level, and now he had dropped to pro wrestling. Not only that, but he was going to be the wrestler that everybody booed. All because Ailes knew his old buddy was too big a crybaby to take some hard questions.

Except the fans aren't going along. They watch a big tough guy bitch and moan about a woman, and they still think he's a big tough guy. They get mad at the woman for making it so hard for him to be tough. They're like Sarah Palin's now-vanished fans, the people who thought that being governor was just a trap holding her back. They’re narcissists on behalf of somebody else, and wounded narcissism is ferocious. Fox' viewers have always scared some of us. Now they scare Roger Ailes.