The Powerful vs. Trump 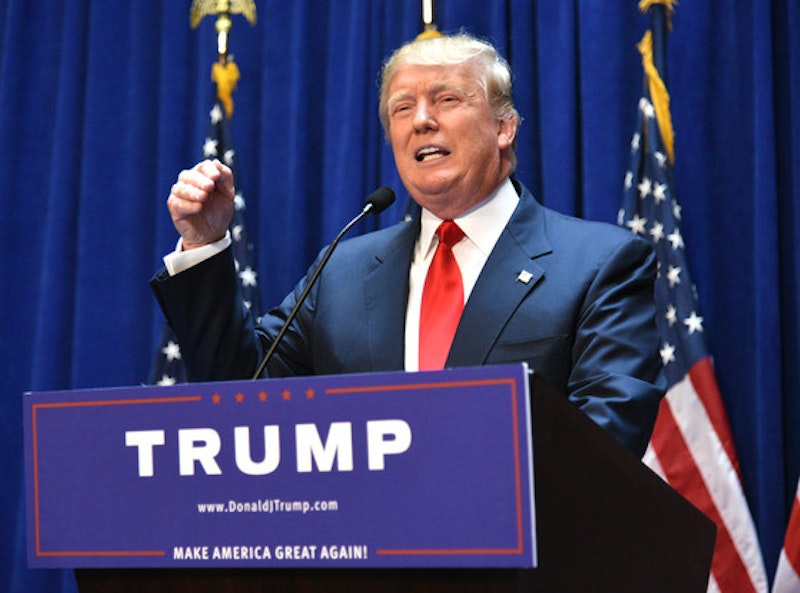 That seems like a pretty straightforward argument. But pundits love to be counterintuitive, and so various people are in fact making the counterintuitive argument that Trump helps himself by making the powerful hate him. Thus Jeet Heer on Twitter tells the "elite media & political class" that "all the things about Trump that make you cringe are what his base loves about him." Josh Marshall adds "base Republican politics is about the appeal of rule breaking and grievance. I don't think Trump will lose playing to those." GOP elites can cut off Trump's head, but whenever they do, two hair-pieces grow back in its place.

It's certainly true that the GOP has made a fetish out of anti-establishmentarianism. As a result, they've opened up space for unqualified candidates to use their lack of qualifications as a selling point. Herman Cain, Michelle Bachman, Newt Gingrich, Ben Carson, etc. etc. They all had their polling spurts and their moment to gorge on publicity, even though none were remotely acceptable to the party.

Trump, with his reality television brand, his money,  and his flare for the flamboyantly outrageous, has made a bigger splash than any of these little trumplets. But is he really qualitatively different? Has he truly found a way to defy political gravity? Will Trump's campaign reshape the face of the Republican party—by, for example, centering anti-immigrant policies, or by making the other candidates look weak and unPresidential?

I'm skeptical, largely because, again, powerful people are actually powerful. Trump's reckless bluster, and his refusal to make any effort to court party elites, has already cost his campaign badly. He's been frozen out by the Koch brothers, who refused to let him speak at an annual grass-roots summit, and also won't let him purchase vital data and analytics services that they control. Erick Erikson of Redstate disinvited Trump from his conservative activist event last week, citing Trump's attacks on Fox News' Megyn Kelly.

Perhaps most tellingly, Trump's attacks on Kelly led his campaign manager Roger Stone to quit (Trump says he fired him, for what it's worth.) Stone said in a memo, "Unfortunately, the current controversies involving personalities and provocative media fights have reached such a high volume that it has distracted attention from your platform and overwhelmed your core message." In other words, the battles Trump has chosen to pick with party elites have damaged his campaign and made his manager abandon ship.

Trump is still doing well in polls. But political scientists have established pretty clearly that polls a year before a presidential election mean little. Party endorsements are much more predictive of who wins. Polls mostly tell you who has name recognition and who is in the news. Which is why Trump can say horrible things about Mexicans or veterans or Megyn Kelly and still have his poll numbers go up. Any news is good news—if you're running to get high poll numbers, rather than running for the Republican nomination.

If you are running for the party nomination, though, you need an organization. You need access to data. You need party activists. You need endorsements from people who can connect you to party networks and resources. You need a get out the vote operation; you need call lists. You need donors (yes, even Trump needs donors). You need media that won't just mention your name, but will tell people to vote for you.

If Trump were a decent politician, he might have been able to turn his flair for publicity into a movement that could have affected the campaign. He might have pushed the GOP to the right on immigration for example (though it's quite far to the right already.) But he's chosen to be a clown-show, and now most of the media coverage of him, by left and right (check out the National Review on Trump) is about how he's a clown. His poll numbers will probably stay high for a while, because, again, he's in the news. But without party actors and party elites, there's no way for him to convert those poll numbers to actual influence, relevance, or votes.

This is perhaps the real significance of Trump. He hasn't changed the rules of politics, but he demonstrates how the Republicans have fooled their voters (and for that matter, many liberal pundits) into thinking that the rules of politics have changed, or should change. The myth of the pure populist poisons Republican politics, not because it means Trump will win, but because it means that every GOP politician ends up pretending to be Trump, just a little. Refusal to compromise has become a default goal in itself, which makes it difficult for Republicans to offer any real policy proposals (they're still working on the health care plan, I understand.)

It would be nice  to imagine that Trump will scare the GOP into changing. But I doubt that will happen either. Trump, who blusters about his own influence, doesn't understand or respect power enough to do anything, or get anything done, either for ill or for good. He's a decent entertainer, perhaps. But he's an ineffectual demagogue.