The Worst Review of Star Wars: The Force Awakens

Step up to the stage, John Podhoretz. 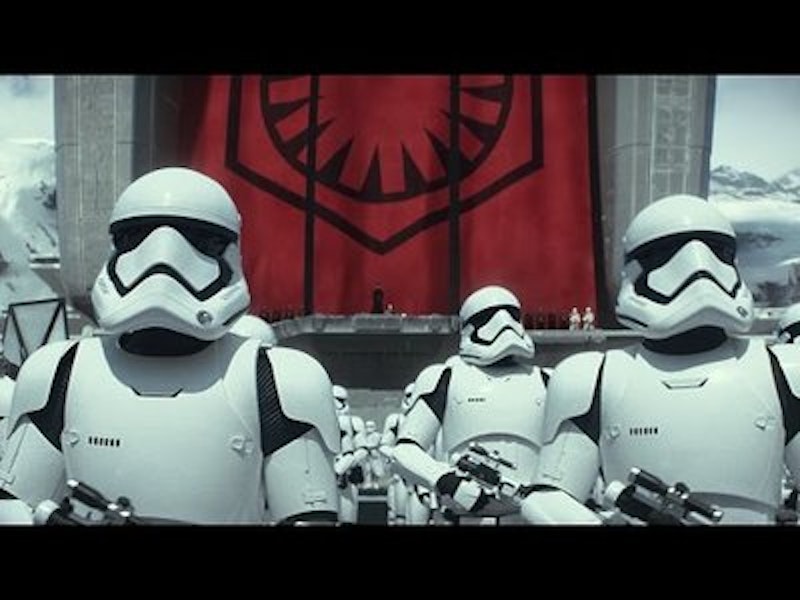 By now, people are cottoning on to the fact that Star Wars: The Force Awakens sucks. The critics who initially praised the film, usually in a blood rush of nostalgia, are looking pretty silly.

But what was the worst review of The Force Awakens?

That honor goes to John Podhoretz, the movie reviewer for the Weekly Standard. Other critics may have been bamboozled by special effects, or driven to distraction by their nerdgasms, or simply not been thinking clearly that day, but at least they reviewed the actual film. They addressed the plot, cinematography, action sequences, dialogue and editing. Podhoretz simply refused to review the film. Here’s his opening:

"There’s no upside for me in reviewing Star Wars: The Force Awakens. If I say anything interesting about its plot, I'll be criticized for publishing spoilers. If I say anything critical, I'll be accused of raining on everybody's parade. If I praise it, I'll be attacked for excessive kindness and sentimentality. So let me just say that I thought it was pretty good, that I enjoyed watching it, and that it has all the strengths and weaknesses of every project with which its cowriter and director, J. J. Abrams, is involved. Which is to say: Its first 45 minutes are sensational; it plays on the viewer's emotions expertly; and it is cast brilliantly."

That’s pretty much it. Podhoretz is typically given to trembling hyperbole: Michael Chabon is “the best writer of English prose in this country, and the most interesting novelist of his generation”; Oscar Isaac is “the most interesting American actor at work today in the movies”; Spotlight is “the best portrayal of the day-to-day inner workings of a newspaper ever put on film”; Pauline Kael is “the best popular-culture critic of her or any other time.” Yet for the year’s biggest film he can barely sit up.

Podhoretz is a conservative, the son of two giants - Norman Podhoretz, who is a gifted and groundbreaking journalist, and Midge Decter, who was a powerhouse writer - but his Star Wars review represents the perils of affirmative action. Pod Jr. owes his career to Pod Sr., and being Republican royalty has allowed him to escape the bruises of competing in real life.

In 1995 Podhoretz helped found the Weekly Standard, which was kept alive by Rupert Murdoch until he sold it two years ago to Philip Anschutz. But even under Anschutz Pod seems to have a sweet deal. He’s like a like a long-term government worker, a GS-9 just phoning it in until retirement.

On November 9 Podhoretz published a piece called “A Critic’s Confession.” In it are enumerated the kinds of movies he doesn’t review: “it’s often the case that you want to hear my views on a movie I have simply decided I cannot bear to see.” The first kind of movie is the scary kind:  “As I’ve gotten older I’ve lost my tolerance for being frightened at the movies.” The second is the kids-in-danger genre: “I cannot sit through any depiction of child abuse or any film in which a child is placed in physical or emotional jeopardy.”  Lastly there are those bad old liberal movies: “I am increasingly unable to pass any kind of aesthetic judgment on fact-based films whose primary purpose is the naked advancement of a left-wing agenda.”

Taken together, Pod’s list of wonts makes one wonder how he stays hired as a critic. He’s the welfare queen who says she’s willing to work, but doesn’t do windows. Or sweep. Or use computers. Pod’s first two criteria for rejection, scary movies and kids-in-danger movies, leaves out quite a lot of films, and the entire horror genre. So much for The Hunger Games, Jaws, The Wizard of Oz, Super 8, E.T., Pinocchio, The Exorcist, and the Star Wars prequels. Pod’s third diktat, about rejecting any left-wing movies, reveals an ironic totalitarianism; it’s the narrow self-censorship that is a conservative form of Stalinism, where only art that supports the State - or in this case the anti-State - is permissible. There’s also hypocrisy here big enough to steer the Death Star through. On November 23 Podhoretz, who hates scary left-wing movies and kids in danger, gave a rave to Spotlight, a film about liberal newspaper reporters who takes down the Catholic Church as a result of the sexual abuse of children.

In the wake of The Force Awakens, as people have been sobering up and realizing it’s a terrible movie, it’s been fun to backtrack to the critics who took their jobs seriously and called this epic juggernaut a stinker. They recognize The Force Awakens as derivative and lazy. Kind of like the work of a certain critic.