An Armistice for the Holidays 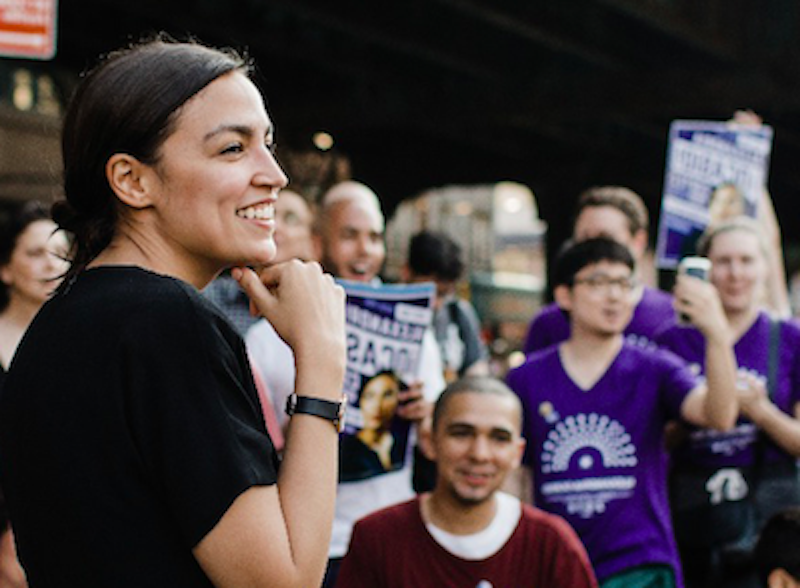 I have an idea that could solve two problems at once—and maybe bring about world peace to boot. Socialist House member Alexandria Ocasio-Cortez says she can’t find housing in DC that she can afford, and Fox News host Tucker Carlson’s family needs something to ward off the noisy leftist protestors who briefly gathered outside his house, purportedly frightening his kids (one of whom also got called a whore by a boorish bar patron last week).

So why not have Ocasio-Cortez move in with the Carlsons, likely turning those protests into warm waves of neighborly welcome? Everybody wins. This would be a boon to Carlson’s employer as well, since the day-to-day bickering in the house would obviously be great fodder for a reality TV show. (“I’m redistributing the refrigerator contents, Tucker!” “Don’t make me deport you, Alexandria!” etc.) In time, they might learn to get along and teach this whole world to love.

I’m not confident Fox will reward me if they actually produce the show, though. Former MTV VJ turned Fox host Kennedy has credited me with bringing her to Fox back when I briefly worked there, for instance—and was even nice enough to share her gluten-free pie crust recipe with my mom—but abruptly and completely cut off all contact with me the instant she realized Fox had put me on one of its numerous blacklists for some imagined contract-dispute offense (and for a time barred me from entering their building even if invited by colleagues). That’s not cool. Not by 1990s standards, not by any standards.

I was scheduled, futilely as it turned out, to talk to Kennedy on-air about UFOs, as I’ve mentioned in a prior column, but then got turned away from the building. Come to think of it, I also told Carlson a UFO incident he had hyped may merely have been a result of lens flare (much like a J.J. Abrams movie). I assume he didn’t do a skeptical follow-up story—just as Kennedy will likely never do a follow-up story admitting the ghost she thought lived in her apartment was probably just one of the people from a party she was throwing that night.

Maybe it’s my skepticism and rationality Fox can’t stand. Hard to say. They don’t talk to me anymore. They’re not kind people, and they don’t really know how to sustain strong relationships.

I also tried pitching a show to Fox News president Roger Ailes called The Extremists, based on the idea of never having a Republican or Democrat on the discussion panel, only minor parties and outright fringe loonies. I’d be the perfect host, comedic yet calming, like a Bob Newhart for an era with a much shorter attention span. Alas, Ailes is now dead, and I don’t currently have the resources to produce the show alone. I have no resources at all, really, which is why I genuinely sympathize with Ocasio-Cortez. Maybe I’ll also have to live in the Carlson home.

I suspect Ocasio-Cortez won’t end up homeless, though. She’ll be dancing, making macaroni and cheese, spouting socialist nonsense, and dreaming wide-eyed of running for president—as in her recent Instagram video—in some domicile soon enough, even if it means joining a commie co-op, which will probably let her stay for free. Or she and Tucker can contact me about planning the big show; maybe launch it with a friendly Thanksgiving dinner at the house. Her Trump-like mic-drop catchphrase could be “You’re socialized!”

You know, she was one month old when the Berlin Wall came down. She may barely believe it was real. Some of us are much, much older than that now. Our patience is getting pretty thin with all of this politics stuff, truth be told. Time for a grand truce, perhaps, like the World War I armistice whose centenary we celebrated this week.

In fact, the show about the Ocasio-Carlson household could be filled with interstitial history lessons, teaching her the horrors of 20th-century socialism and him the benefits of mass migration—such as the emigration waves that ended the Soviet Union, to the delight, I thought, of countless conservatives about his age and mine.

Admittedly, times have changed since then. I see, for instance, that one campus activist at Brown University who made national news back then, when I was there, Jesselyn Radack—a prominent defender of Brown’s anonymous graffiti “rape list” of purported assailants that ended up expanding so indiscriminately as a political weapon that it briefly, I’m told, even had me on it—is now in the news in a different way. She didn’t just go on to become a lawyer for Edward Snowden (which I would of course applaud now, in my more anarchist middle age) but has ended up outed as fake whistleblower herself, possibly having fabricated a story of being raped by a colleague.

It’s enough to make one wonder (a) whether she might also be the person who falsely added me to that list three decades ago and (b) whether I was right after all, in my uptight young conservative way, to think there was something odd (not necessarily wrong but odd) about the most visible anti-rape activist on campus also posing for Playboy, as she did. No one wants to be psychoanalyzed when they’re idealistic and young, but you know damn well a lot of those people have issues, and not just in the Playboy sense of the word. Every college campus is a bit like a reality show house.

Tom Paine, in words that should stir the hearts of libertarians, nationalist conservatives, and pro-immigration leftists alike, said freedom was rare in the Old World and that this was all the more reason a welcoming America should “receive the fugitive and prepare in time an asylum for mankind.” You know, Asylum for Mankind might be exactly the right title for a show about all the deranged political people trying to live together. I’m ready to teach them all peace of mind.