My real-life tales of abject confusion. 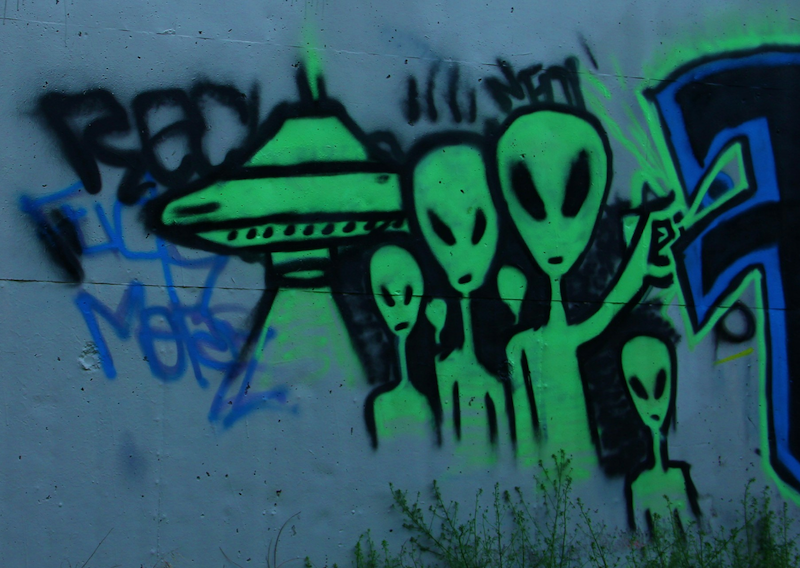 Last month saw real UFOs discussed in a sober fashion in The New York Times, and this month has seen the jarring, somewhat confusing return of The X-Files to TV. After centuries of warfare between believers and skeptics—on numerous topics—this is a good time for both fiction and non-fiction to adopt a healthy, agnostic “Who really knows?” attitude.

That’s the attitude I’m maintaining toward my own mediocre UFO sighting, but I’ll get to that in a few paragraphs.

The X-Files premiere was more Spalding Gray than “Greys,” that is, chock full not of aliens but of expository monologues that even this very talented and experienced cast had difficulty delivering convincingly. I didn’t mind, though. So many dramas have the same rhythm and plot structure, why not have an hour of motor-mouthed ranting for a change? I hope this week’s episode will be even weirder, maybe narrated by an insect or taking place entirely within a suit of medieval armor at the bottom of a lake.

It’s apt, too, that the hour served to drastically revise certain seemingly-fundamental assumptions about what happened in not only Season 10 two years ago but Season 9 16 years ago. I don’t know how viewers felt, but for a writer, editor, and sometime TV producer like me, this episode was like being immersed directly in X-Files creator Chris Carter’s panicked revision process, and I found the honesty rather bracing. It was like a reboot planned right before our eyes in real time for a change, lacking only a God stand-in saying, “Let’s move this plotline over here for now, then erase this part. OK, that should do.” Why not?

Naturally, there was a little time travel and/or prophecy involved, but the important thing is that the bad guy is trying to kill everyone again, and our heroes need to stop him from getting the one thing he needs before starting the culling of the Earth. I’ll say no more and hope the remaining nine episodes take some chances as well.

I suppose you could call the stream-of-consciousness effect of the episode Joycean, but Tim Cavanaugh faults me for implying in my prior column that Joyce’s Ulysses narrator was drunk. Most scholars—not all—claim Bloom was never even tipsy, just modernist. This being the 100th anniversary of the publication of Ulysses’ first installment may mean I should take greater care when referring to the work. But this being about the 30th anniversary of me reading the book means the details are even fuzzier now than they were when I read it.

I contend, at any rate, that I was perfectly sober last year when I (technically, given the meaning of the abbreviation) saw a UFO in Manhattan. Now, admittedly, Manhattan is known for drunkenness, but it is also the borough most prone to UFO sightings (remarkable given how hard it is to see stars in this light-drenched metropolis). It was literally no big thing—and thus most likely just a very advanced drone—maybe the size of a music CD, utterly silent, utterly flat, and highly prismatic, cruising along about 20 feet above the street one night as I walked on the sidewalk. But being silent, very small, and devoid of any visible parts at all other than the prismatic disc itself (which I’ll assume was a fast-moving rotor, but I couldn’t be sure of that) would have to make it a rather advanced drone.

Normally, drones make noise like lawnmowers (and remember that making such things tiny is trickier and more expensive than making them large), and basic physics would seem to require a secondary rotor or tailfin for stability, though I saw none. I conferred with a friend trained in physics and another who writes about cutting-edge military tech, and the former joked that the thing may well have been so expensive that men in suits might have rushed out and jumped me if I’d grabbed it or thrown a rock at it, while the latter guessed that NYPD likely have nothing as advanced and thus that “a rich protester” might have been a more likely owner/operator, the location being mere blocks from one of Trump’s buildings.

But again, who knows? Despite being a hardcore, lifelong skeptic (about all things—believe nothing without good evidence), I figured it would cost me nothing to try communicating with it if it were alien, so I just looked at it as it stopped its smooth flight upon reaching a curbside tree and, gambling it might read minds, I thought, “C’mon, don’t just hover near that tree, come down here and talk.” At that point, surprisingly, it moved in a perfectly smooth and still-silent fashion in a straight line from the tree toward my face, stopping stock still about 10 feet up (it was almost like watching a zoom-in with a camera lens happen). That could’ve been the doing of an unseen human operator nearby, of course.

All this happened in seconds, so I hadn’t really planned my next move, and a moment later it darted away up the block, zooming off around a corner and out of sight. Proving that I’m a Manhattanite, I immediately concluded it wasn’t worth shouting or running or annoying other pedestrians about and continued trudging home. But who knows?

Maybe John Podesta knows. He, like Sen. Harry Reid, tweeted his approval of those New York Times pieces on UFOs and was a dead-serious advocate of UFO disclosure long before he became Hillary Clinton’s campaign chair. Don’t let anyone tell you he was joking on that topic—I have a UFO book for which he wrote the earnest introduction. One of the innumerable ironies of the fact-challenged past couple of years in politics is that according to the establishment, we were all supposed to scoff at conspiracy theories about Podesta while presumably still treating conspiracy theories pushed by Podesta (whether about Russians or an alien cover-up) with some measure of respect. Picking and choosing among wild narratives is getting exhausting these days.

In fact, I was invited on Fox to talk about some of these issues by hostess Kennedy a few years ago, showing up as scheduled, then was inexplicably ousted from the building by security, after which Kennedy, formerly extremely friendly, wouldn’t respond to my inquiries—or even look me in the eye the last time we were at the same libertarian event. I hate to conclude that she or Fox News are part of the cover-up (as opposed to just being a notoriously dumb, paranoid, harassment-prone bureaucracy). But who knows?

Like a UFO witness or an X-Files fan, he who moves in the worlds of media and politics must learn to live with unsettling unknowns. All humans do.