Antifa tried to batter his door in, but they’d like many of his ideas. 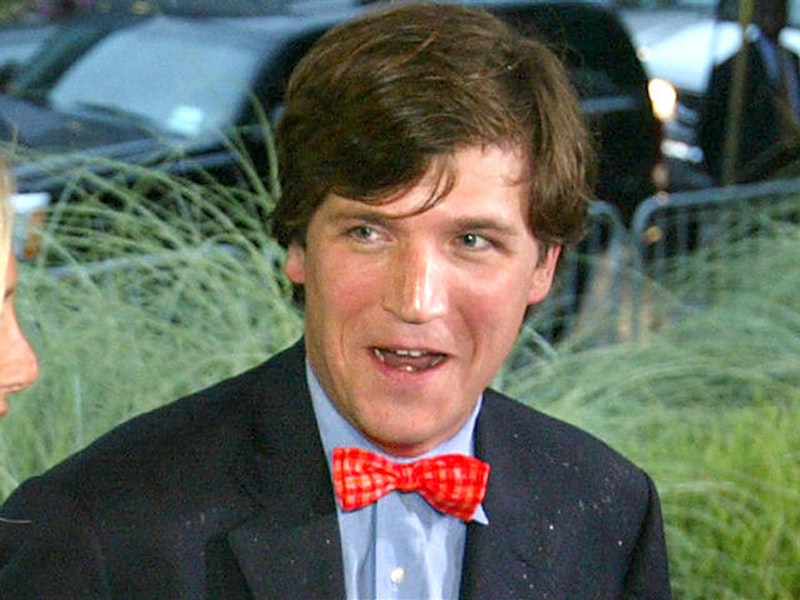 On Wednesday evening, a group of antifa soldiers descended on Fox News host Tucker Carlson’s Northwest Washington D.C. home, shortly after some of their associates had publicly released his address. Carlson was in the Fox studio at the time, which normally you’d expect the protesters to be aware of, but it’s not yet clear how well these masked thugs who pretend to save us from fascism are able to put two and two together. As a result, their threatening presence—one of their chants was, “We know where you sleep at night”—was aimed at people guilty of nothing—Carlson’s wife and four children.

The host of Tucker Carlson Tonight has earned his bête noire status on the left via his hardline stances on immigration. Among doctrinaire progressives, it’s axiomatic at this point that Carlson’s a “white supremacist.” These detractors know little about the full panoply of Carlson’s political views, however, because the Left no longer reads the books of the Right, and vice versa. Carlson’s considered “evil,” so nothing he’d write could possible be worth reading. Had someone explained his opinions to the angry black-clad activists who reportedly cracked the front door of the Carlson residence, they might’ve been taken aback about how similar they were to those of Bernie Sanders.

The senator from Vermont’s not keen on immigration himself. The guy who fights so hard for working Americans being able to make a decent wage for a 40-hour workweek isn’t passionate about outsiders. Based on the law of supply and demand, Sanders sees immigration as a constant brake on wage growth. It’s long forgotten by the Left now, but another hero, Cesar Chavez, opposed illegal immigration in order to protect the gains made by his union, the United Farm Workers. Joe Biden once introduced legislation to stem the tide of Vietnamese immigration. Bill Clinton, in his 1995 State of the Union address, said, “All Americans... are rightly disturbed by the large numbers of illegal aliens entering our country. The jobs they hold might otherwise be held by U.S. citizens or immigrants. The public services they use impose burdens on our taxpayers.” Pat Buchanan’s ears must’ve perked up.

Among Bernie Sanders’ favorite whipping boys are members of the coastal elites. Carlson believes that these elites must be gutted to pave the way for a return to mass democracy. In his new book, Ship of Fools: How a Selfish Ruling Class is Bringing America to the Brink of Revolution, Carlson offers a dire warning to a nation he believes is slouching towards authoritarian rule. The author sees, just like antifa does, violent revolution as a real possibility.

During a recent appearance on “The Ben Shapiro Show,” Carlson told his host, “You want to live, if you’re in a democracy, in a country where the middle class, normal people with 100 IQs making 80 grand a year can lead productive, meaningful lives”—later in the podcast he upped that figure to “90 grand.” He said that was the rule in the American “post-war period,” referring to WWII. That sounds like a thought that antifa could get behind!

Carlson fully supports Teddy Roosevelt’s decision to break up the trusts. Addressing how the mindset of the people in charge has changed since the robber barons called the shots, he said, “They no longer acknowledge they’re in charge and they no longer acknowledge they have a responsibility to the people.” Carlson compares society to the family—“the parents are in complete control of their children, but they also have a moral obligation to take care of them.” That sounds like some left-wing wealth distribution and corporate responsibility advocacy to me.

As for the gig economy, beloved by the free marketers, Carlson calls out Travis Kalanick for not treating his Uber drivers as employees or paying for their health insurance. He points out Kalanick’s hypocrisy in lecturing everybody about police brutality and Black Lives Matter while growing fabulously wealthy on the backs of his own “core group.”

When Ben Shapiro, defending free market ideology, spoke of how Americans can buy so many goods at cheaper prices than before, Carlson asked him, “What’s the suicide rate doing right now”? He’s not a secret socialist—even though he admits that he often aligns politically with Sanders—but feels that policy makers should think, above all, of creating a stable society. The U.S. no longer has a stable middle class, the bedrock upon which the nation’s been built, and Carlson worries that not enough attention’s paid to the consequences.

Carlson believes the current economy has made labor valueless. Because cognitive ability’s so valued now, he says we’ve created a class system based on IQ, a fact that Donald Trump has successfully tapped into—e.g. ”I love the undereducated!” The Fox host would like the government to ban driverless vehicles because driving a truck’s the single most common job for men without college degrees. This, he says, is about protecting the “greater good.” When was the last time you heard a conservative speak of the “greater good”?

Carlson, who Stephen Colbert just called a “monster,” is much more socially conscious than Hillary Clinton, who diverts from her love of Wall Street, Silicon Valley, and Hollywood with showy, yet empty, appeals to identity politics. Have you ever heard Hillary talk about a selfish ruling class? No, because she’d be talking about herself. But Carlson’s a “racist,” as Luke Darby suggests in GQ, because he won’t mindlessly buy the Left’s empty new quasi-religious incantation—”Our diversity is our strength.” Diversity has pluses and minuses—it does not automatically produce strength.

Case in point: religious diversity in India before Pakistan was formed. Here’s a quote from New York Times columnist Paul Krugman, a longtime beacon of morality among progressives: “We’ll need to reduce the inflow of low-skill immigrants.” Those would be “brown people,” wouldn’t they? The antifa better set about finding where this white supremacist sleeps now.