Naysayers aside, Mitt Romney proved he wasn’t an android. 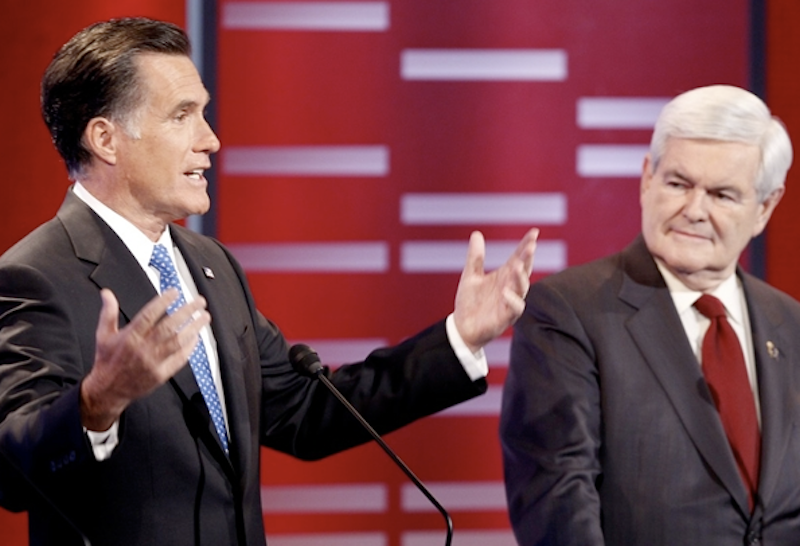 The most significant political news over the weekend was evidence that GOP presidential contender Mitt Romney actually has a pulse. In what can only be described as a brilliant maneuver at an Iowa debate on Saturday, Romney’s now famous—and quickly ridiculed by the brain-dead pack media—“off-message” attempted wager with dead-in-the-water opponent Rick Perry over alterations in his book No Apologies is the first time he’s shown proof of being a “regular guy.”

Okay, so Mitt went overboard with the proposed $10,000 bet: he’d have been better off with a simple, “Rick, a C-Note says you can’t prove I changed anything in my book.” Nevertheless, it came off as the first example of spontaneity from a candidate who’s commonly referred to as “robotic.” I don’t think there’s any question that’s Romney’s advisers, feeling the heat of Newt Gingrich’s sudden front-runner status, fed their boss the gimmick: after all, one gets the impression that the most daring thing Romney’s ever done is decide, upon looking at the wardrobe laid out on a sofa the night before a campaign event, to pick a blue tie instead of the red one lying on his starched white shirt.

Yeah, yeah, you can 99% me until I can grow a full beard overnight, but the simple fact is that millions of Americans make bets every day, whether on sporting events, political primaries or the winner of a reality show. What is a lottery ticket if not a bet? And while few people will put up 10 grand, aside from the pros, every single day millions of dollars change hands as a result of bets. I’d have never guessed that Romney, even if he didn’t come up with the debate gambit, would ever venture into that territory. Perry strained credulity when he replied, “I’m not in the betting business, but I’ll show you the book.” I don’t care if Perry really believes in all that Evangelical jazz, his proud persona as a larger-than-life Texan suggests that in the past he’s won or lost money on football games.

There was absolutely no downside to Romney’s uncharacteristic trick: sure, instantaneously the left wing blasted him as a cold corporate monster, but that was already their rap on him anyway, and it’s not as if anyone who reads Talking Points Memo or The New York Times is going to vote for Romney should he win the GOP nomination. As for the Christian Right that all the Republicans are chasing, they’re also left with no alternative in the general election. Plus, there’s the not inconsiderable bonus that Gingrich, who’s in no position to invoke another candidate’s wealth, will make an impromptu remark about Romney that’ll go way too far—a Mormon joke, perhaps?—and blow up in his face.

The Daily Beast’s Michelle Cottle, writing a few hours after the debate, was typical in her assessment of the supposed self-inflicted damage Romney suffered. She wrote: “What the hell was Mitt thinking? The big take away from tonight’s debate will undoubtedly be the governor’s $10-k bet moment—the most painful misstep since Rick Perry couldn’t call to mind three cabinet agencies. Bet your butt that, as Romney thrust his uncalloused hand [I’m sure that 99% of the political media possess hands that could be mistaken for those of a ditch digger] at Perry, David Axelrod and Jim Messina [Obama operatives] damn near wet themselves with delight.”

Hooey. It was the most humane moment of Romney’s permanent campaign.