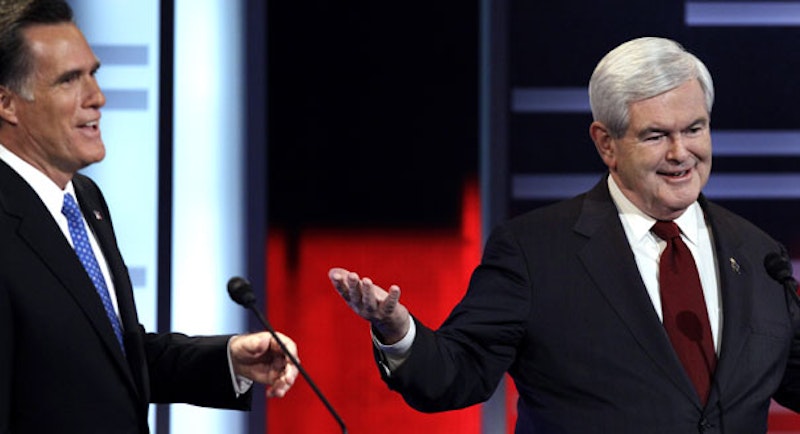 Newt is surging and the Iowa caucus is nearly upon us. So last Saturday the GOP candidates gathered in Des Moines to have at it. Fireworks? Oh yeah. “The most contentious, negative debate of the campaign,” says winger journalist Michael Barone. On the other hand, screw it. Newt Gingrich made Mitt Romney look like an ass for losing a Senate race 17 years ago. Romney then made an even bigger ass of himself by squaring off with Rick Perry, the former New Reagan who will soon be taping jokey commercials for car tires or roach spray. (“Kills ’em dead, leaves no mess, and, uh... what was that third thing?”) For an encore, Newt squared his chins and defended use of an ancient neocon talking point about the Middle East. So, all in all, nothing much happened. But I suppose it was crucial. For now, anyway.

The debates have been funny yet boring. This is always the case with U.S. political debates; the typical format is the human equivalent of a hamster cage with wheel. But this year the Republican contests have been especially silly and especially dull. So many people gathered on stage, such rich blues and reds in the lighting, so many words spoken, and all that results is blur. Nothing jumps out unless you cross your eyes, something political reporters are used to doing. So let us cross our eyes and allow the drama to emerge.

First, there’s Newt and his command moment. “The only reason you didn't become a career politician,” Newt told Mitt Romney, “is you lost to Teddy Kennedy in 1994.” Which is all true, and mentioning Kennedy makes it worse. People gasped when Newt let fly with that one. To give Newt his due, I have read a number of liberal pundits make the same point about Romney’s “outsider” cred, but none of have made it nearly so well. Newt poses as an intellectual but thinks like a management-consultant hustler, the sort with flip charts that show triangles and arrows. His aim is to keep talking until he’s on the plane home with a check in his pocket. This causes his detractors to say that he isn’t actually smart. But, boy, he really is. He has a greater gift for words, or at least words spoken on the fly, than anyone in public life.

His delivery is even better. That’s not a matter of intelligence as normally understood, but it counts. Reagan’s “I paid for this microphone” moment would have been a whine if he hadn’t known how to snap his voice just right. Newt’s jab would have been bitchy without the right push to the words. Instead the two of them, Reagan and Newt, enjoyed cut-the-crap moments where the smoke got cleared away and everyone had a look at the brass tacks. Voters like that kind of thing, and Republican voters love it.

Until now Newt’s debate jabs have been at the expense of network droids. This time the victim was his party’s alleged frontrunner. I’ve remarked that the jittery, anxious-to-please Mitt Romney looks like a man trying to hide his history of premature ejaculation. Going up against Gingrich, he looked like a man who’s given up on hiding and must tell an impatient date what just happened. Challenging Newt made Romney come unpinned. It was painful, and that was even before Gingrich landed on him.

From there matters just got worse. The old rule in these debates has been that anyone who makes Mitt suffer must then destroy himself. That’s what happened to Tim Pawlenty and Perry. It should also have happened to Newt, especially given his history of flapmouth and self-destruction. But at Drake University on Dec. 10 the Curse of Mitt took an odd turn. This time the victim was Mitt. Wanting to look like a tough guy, he turned to Perry and bet him $10,000 about the wording of a book. He did this thinking the folks at home would say he was a straightforward kind of Joe, a guy willing to say put up or shut up. Being as rich as he is, he didn’t take into account that the median income for U.S. households is around $50,000.

Perry, if he were quicker and less accustomed to affluent company, might have said, “Families have to work months just to get that kind of money to feed their kids. Now here you are waving it around like we’re playing a game. Let me tell you,” and so on. The next day reporters still couldn’t agree about Mitt’s book and its contents. Did it say the whole country should use the individual mandate or did it just say Massachusetts? But one thing they did know: Mitt had acted like a rich man and done it with the electorate watching. The artificial Mitt is irritating and depressing, but the authentic Mitt is a disaster. First “I’m running for office, for Pete’s sake” and now this.

What about Newt and his neocon moment? Like Reagan talking about “the Evil Empire,” he said, he was brave enough to say Palestinians were a non-people because the Ottoman Empire didn’t mention them on its maps. Neoconservatives have been pushing this idea for a while. The corollary, I suppose, is that a non-people must be made up of non-persons and that it doesn’t matter where non-persons end up. But Newt didn’t get down to that secret, subterranean layer of brass tacks. No U.S. politician ever will until Mitt Romney is caught unawares.