We should say he is too. 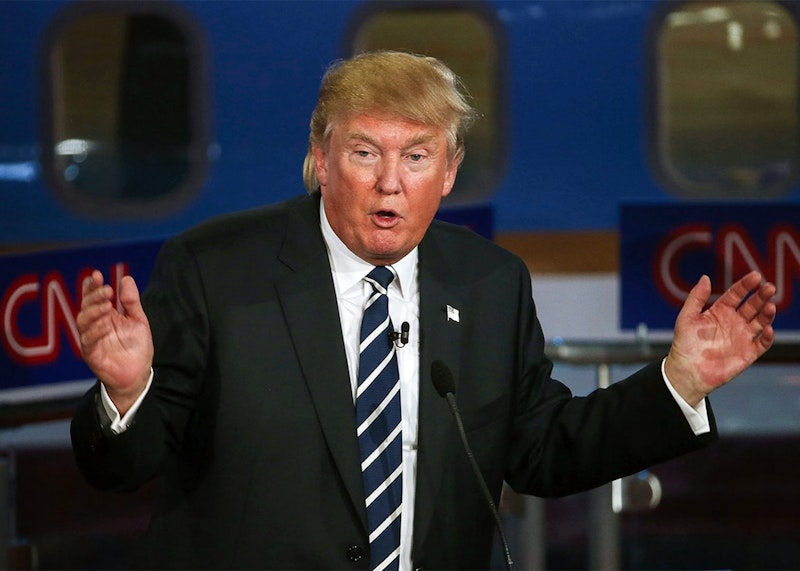 Donald Trump is not just an admitted liar. He’s a self-proclaimed liar. The press ought to bring this up with him. When Trump says he saw TV footage of Arab Americans in New Jersey celebrating 9-11, George Stephanopoulos shouldn't just point out that police in New Jersey say no such celebrating occurred. He should flash on the screen the relevant quotes where Trump said that lying is part of his modus operandi. How could Stephanopoulos have known those quotes would be necessary? Because he was going to talk to Donald Trump.

Well, sure! But his praise of Hillary and Jeb was for the public. The laudatory quotes came from remarks to reporters and from his little-read but much-mined book The America We Deserve (a title that should be the slogan of his campaign). He didn't sidle up to Hillary or Jeb and lay some bullshit on them. Or he didn't do just that. He lied to the rest of us too.

If Trump says he'll lie for business advantage, a reporter should ask him if he'll lie for political advantage. Ideally, a reporter would tell him that now it's presumed he will lie for political advantage, but the rules don't allow such frankness. We'll have to settle for asking, and for flashing the quotes on the screen. No, even that won't happen. Journalists can't compute the idea that they're allowed to say a politician is an admitted liar. They have a highly salient reason to freshen up their thinking, given that this politician is now telling a race lie. But no reason can compel a reporter to have a new thought.

Race lie. Muslims are seen as aliens here, and Trump is willing to bait people like that. The story he's telling is the same brand as the story about Jews staying clear of the World Trade Center on 9-11. Or about Jews putting gentile blood in their matzoh. The blood libel is worse, but these things are a continuum. Trump is working his way along it and may get there yet.

What remains is for people—I mean the press and voters at large—to notice that the race lie has re-entered national politics. Not smarmy talking points and slanted numbers, but stories that attribute nasty, particular and made-up behavior to some ethnic or religious group. Like saying that Mexico's government is letting its rapists out of prison and sending them across the border. Trump began his campaign with a race lie, but it's still a minority point of view that he's a racist. (Larry David thinks so, Saturday Night Live doesn't.) I hope his lie about 9-11 will tip the balance.