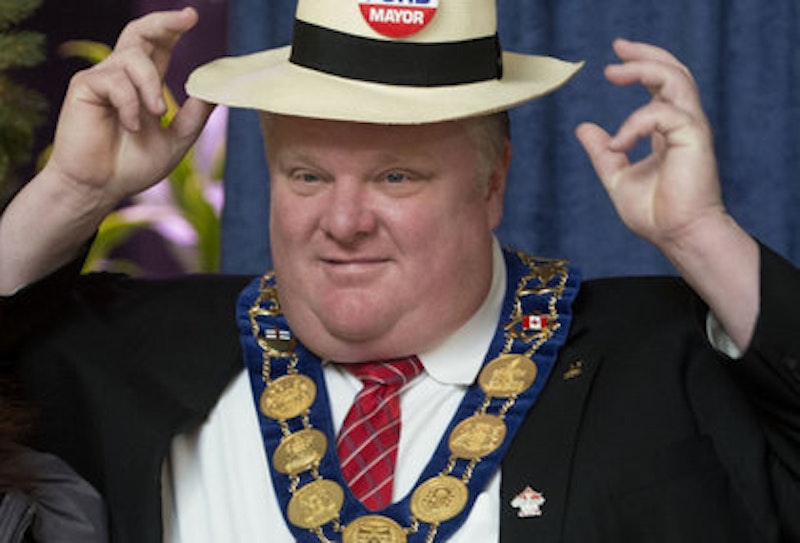 1. Before entering the political arena, Rob Ford made waves as a World's Strongest Man regional semi-finalist; his best event was the Dead Lift.

2. Ford collects vintage sweaters, and is obsessed with sweaters worn by the likes of Arsenio Hall and Bill Cosby. An entire wing of his manor has been redecorated to resemble the 1990s urban menswear retailer Cookies. Ford insists that he does not actually don the sweaters, as he holds them in the highest esteem and "cannot be responsible for what might or might not happen to any clothing worn on my person at any given moment."

3. Ford is the owner of an unusual number of dogs, and purchased a property in the Toronto suburbs for the purpose of breeding and raising Huskies, St. Bernards, and domesticated wolves. He is often seen out and about walking several of them, a clutch of leashes in one gloved fist and a bottle of Olde English malt liquor in the other.

5. An August 2010 campaign rally was disrupted by a group of young hecklers. Ford, who otherwise had command of his audience, put the rally on hold and, still brandishing a microphone, approached the antagonists. "Excuse me. Why are you interrupting me?" he inquired in a rolling baritone, the microphone held close to lips flecked with white foam. "What gives you the right? What platforms are you running on, gentlemen?" One of the youths was holding a large beverage; another held a crude homemade sign featuring a mischievous Calvin, of Calvin & Hobbes, urinating on the mayor-to-be. When no answer was forthcoming, Ford calmly reached over, helped himself to the beverage, drank it and ate the cup. As dozens of volunteers and well-wishers looked on in amazement, Ford relieved the sign-wielding youth of his creation, scarfing it down. Then he returned to the stage and continued the rally as if nothing untoward had occurred.

6. Ford is often mistaken for Holmes on Homes host Mike Holmes, but has learned to laugh about it—going so far as to break into the homes of constituents at odd hours, flying high on crack binges, to point out "shoddy and erroneous contracting work" and "Anxiety Closet gremlins run amuck."

7. On Friday, November 15th, the Toronto City Council voted unanimously to strip Ford of his power to concatenate matter telekinetically. Fisticuffs broke out when it was revealed that the council had intended, originally, to prohibit Ford from being able to legally perform his eerily accurate beatbox rendition of the main guitar riff from "Concatenation" by the Swedish metal band Meshuggah.