At the least, it’d be a break from the NYT’s steady stream of bad news. 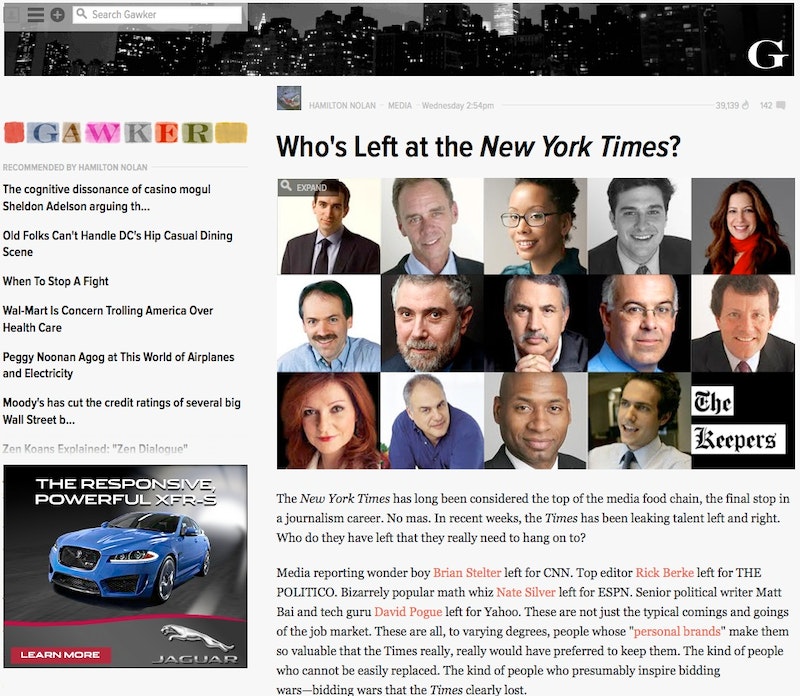 Hardly a week goes by without news of another New York Times defector—media reporter Brian Stelter, 28, was the most recent, migrating to CNN—followed by about 100 stories of What It All Means to the insulated journalism community at large. At this point, not much, I’d say, save that the Times is now a stepping stone for talented writers, sort of like what The Baltimore Sun was a few decades ago when it had a staff. This new reality must be rather embarrassing for publisher Arthur Sulzberger Jr., although he’s blundered into so many business bobby traps, it may not cost him more than a hour of lost sleep.

Gawker’s Hamilton Nolan, a snotty fixture in the Nick Denton stable, ran a post about the Times’ predicament last week, offering advice about what remaining “brands” the daily has to stuff with money in order to remain at least nominally competitive with the likes of Politico and BuzzFeed. Nolan takes a weird shot at Nate Silver—who was taken for granted by the Times even though he was the company’s star in the 2012 elections, and subsequently moved to ESPN—calling him a “bizarrely popular math whiz,” which I can only ascribe to some acrimony between the two writers.

Nolan loves David Carr almost as much as Carr loves Hollywood and the Oscars, calling him a “grizzled rock star” who can “write his own ticket” and warns that he, too, might depart if not properly compensated and given regular shoulder rubs by management. Carr’s a good guy (I knew him long ago when he was editor of Washington’s City Paper) and I imagine he’s pretty loyal to the Times, but at 57, he’s like a baseball player who has one last major free agent contract to cash in (say, Carlos Beltran), and if he leaves early next year it won’t be a surprise.

I’m in complete agreement with Nolan that 61-year-old Will Shortz is invaluable: “Never fuck with the crossword puzzles. They’re all newspapers have left.” If my wife’s morning ritual didn’t include the Times’ crossword, I’d have stopped subscribing to the paper years ago. He also says retaining op-columnists Thomas Friedman (“a uniquely awful writer”), David Brooks (ditto), Maureen Dowd (“Well over the hill,” but with a “big audience,” although that’s dwindling) and Nick Kristof (“virtuous” and “dull” but “respected enough to keep”) is necessary. Friedman, who doesn’t need the money, isn’t going anywhere, and I doubt any other publication or website would waste capital on Dowd.

Naturally, Nolan doles out the most promiscuous praise to the repetitive Paul Krugman: “The paper’s only true stellar columnist. Losing him would be disastrous.” In fact, “losing” Krugman (extremely unlikely, unless the paper craters faster than anticipated) might help rescue the Times from its current preaching-to-the-converted image, but I suspect that’s a minority opinion. I doubt Krugman has an equally obsequious opinion of Gawker, and if the professor has even a tiny funny bone, he could write a column about how Denton’s enterprise violates every single principle the economist holds dear.

Nolan sensibly doesn’t even mention Frank Bruni, the columnist who’s in desperate search of topics to write about now that American acceptance of gay marriage is nearly complete; Bruni’s Nov. 17 essay was about… Bill and Hillary Clinton, and the latter’s maybe/maybe not presidential run three years from now.

Which reminds me that Nolan didn’t offer any ideas of who Sulzberger/executive editor Jill Abramson could counter-poach, and it’s hard to fault him, since what under-50 “star” would willingly hop on the S.S. Minnow unless an extraordinary amount of money was involved? Maybe Ezra Klein, the Beltway fixture who might want to trade up from Jeff Bezos’ Washington Post. Or maybe Rolling Stone’s Matt Taibbi, a colorful writer whose left-wing politics dovetails with the Times, and a guy whose blustery rhetoric could give the paper’s staff a quick sugar high.

In reality, what Sulzberger needs to do is weather the bad publicity of busting the unions that keeps his company’s staff bloated, and then replace the dazed Abramson with a young (under 35) man or woman to fill the executive editor slot and recruit the talent that might possibly engage the next generation of news consumers.