The “sexy nun” outfit is still for sale though. 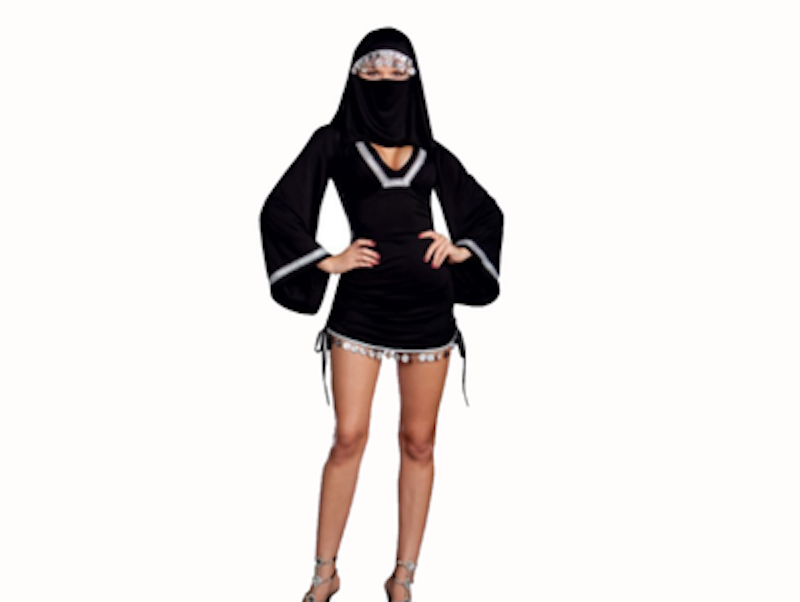 If you've heard about the new “sexy burka,” the $23 mini-dress with a head-covering veil with just a slit for the eyes, and you're looking to purchase it before Halloween (making you an “Orientalist douchebag,” according to one pundit) you'll have a harder time of it now that Amazon’s removed it from its website. Islam’s the most protected religion in the world, so that's hardly a surprise. The only puzzling aspect, besides Amazon posting it to begin with, is that someone would invest time and effort into a product that nobody will sell publicly. It's no big secret that this sort of thing isn't allowed.

The massive backlash was predictable. The vendor was accused of racism, cultural appropriation, and mocking Islam. Many educated people struggle under the misapprehension that Islam is a race, so this reply is now a standard one that happens to have the effect of contributing to the steady erosion of the power of the word “racism.” Using the term “cultural appropriation” is just a tactic for making a negative out of the cultural cross-pollination that's made the world a richer place for centuries. As for mocking Islam, that's just what religions generally deserve. What can they expect when you put forth ludicrous concepts like virgin birth and the 72 virgins waiting in heaven for martyrs while representing yourself as having all of the answers to life?

Amazon was contrite, responding, “All Marketplace sellers must follow our selling guidelines and those who don’t will be subject to action including potential removal of their account. The product in question is no longer available.” It’d be interesting to know specifically what selling guidelines made Amazon take the sexy burka down while keeping the sexy nun on its website.

All religions should be subject to mockery, as they’re created by humans and often claim possession of all of the secrets to life. The new rule, however, is that it's fine to denigrate Christianity, but any criticism of Islam is automatically ”Islamophobic,” a manufactured word for which there is no Christian counterpart.

Huffington Post reported on a statue portraying Jesus as a nude woman as “finally getting its due.” Perhaps it's a step for feminism, but if a sculpture of Muhammad as a nude woman was displayed, HuffPost wouldn't be glorifying it. There’s a good chance someone would get killed too, because you just don't mess around with Islam.

As a result, people who value their health have learned to self-censor. That there's no need for this with Christianity was established definitively in 1987, when American photographer Andres Serrano unveiled his “Piss Christ” photograph of Jesus submerged in the artist's own urine. Serrano even received $15,000 for the work from the taxpayer-funded National Endowment for the Arts, and a Catholic nun defended the work to Bill Moyers on television. No violence occurred.

Islam, however, doesn't turn the other cheek when offended. It's undeniable that it's in a special category of religion—one that provides it with an exemption from any fundamental criticism, even if killing is involved. In such cases, it's always just a few fanatics who are responsible, but such fanaticism requires a culture to nourish it. The Islam exemption leads to The New York Times being afraid to publish the Charlie Hebdo photos that others gave their lives for. On the other hand, the Times published artist Niki Johnson's portrait of Pope Benedict XVI made out of condoms.

If it's not fear motivating the Western media’s reluctance to deal honestly with Islam, then it's a matter of having very low expectations of the religion. The prevailing attitude is certainly very unhelpful to the women forced to wear burkas, perhaps the most potent symbol of female oppression on the planet. Mockery can an effective tool for easing the legitimacy of institutional oppression, but much of the media, and firms like Amazon, refuse to allow it.

Anyone who attempts to take any stand against Islam gets labeled the aggressor. The sexy burka goes on sale and those selling it are condemned, while those imposing it on women get a pass. There's a contest to draw Muhammad in Texas and two Muslim “enforcers” try to kill the artists, who are then blamed for “provoking” the attack.

If you’re a woman who wants to have some fun at the expense of overly sanctimonious religions this Halloween, it looks like you'll have to go with the sexy nun look.