He's a liar, but the sex tape’s importance was hyped. 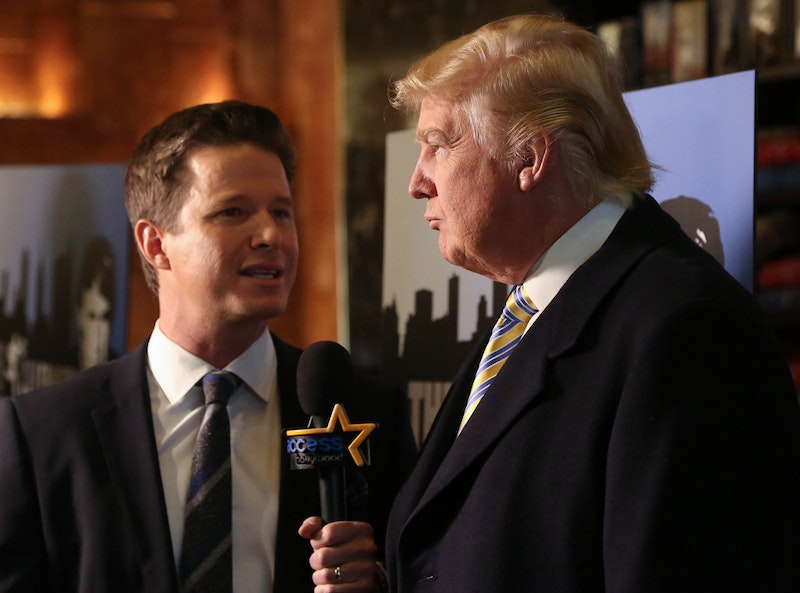 It’s no secret that Donald Trump is crude and socially unacceptable. Now, because he was careless around a hot mic tape made with Billy Bush egging him on, he’s allegedly revealed himself as a routine sexual assaulter of women. Many pundits are saying this is an outright admission by Trump that he’s a sex offender.

The "pussy" scandal certainly hasn't been short on hyperbole, even from some Republicans, who now seem to be shocked that someone who’s obviously been a predator for several decades has been caught telling a sycophantic fanboy in private that he has such powers over women that they willingly go along with his impromptu, uninvited violations of them.

On the tape, Trump sounds like the frat’s number one ladykiller trying hard to impress a freshman rush candidate, laying it on thick. Billy Bush plays his role to the hilt, laughing with delight at Trump's every sexual boast. You can hear Trump chuckling too, as he cranks up the braggadocio level and assures Bush you can do anything to a woman when you're a star. He got his best laugh when he told Billy that star-struck women would even let him “grab them by the pussy.”

Instead of this being taken as just another clear piece of evidence that Trump is classless in his professional life, left-leaning pundits leapt to the conclusion that Trump was literally describing one of his favored sexual assault techniques to an impressionable underling. In Sunday’s debate, a righteous-sounding Anderson Cooper scolded Trump. “That is sexual assault,” he said. “Do you understand that?” The GOP candidate replied that it was no more than “locker room talk” that he was sorry for and quickly changed the topic.

Certainly if Trump went up to women and grabbed them sexually with no hint of consent he could be charged with sexual assault. It wouldn’t surprise me if Trump took such liberties, or if he actually raped women, but the tape is hardly incontrovertible evidence that he's confessing to a sex crime. He said the women let him do it, perhaps trying to signal to Billy Bush that his unprecedented sexual magnetism allows him to get away with what lesser men would be hauled up on charges for.

Trump said that Bill Clinton has said much worse to him on the golf course, which isn't hard to imagine. If only there were tapes of these two sexual predators trying to one-up each other on the links. Had Billy Bush joined them on such an occasion, he’d have been driven to such hysterics by the two super studs that draining a six-inch putt would have been a real challenge.

Things really took an absurd turn when Trump's words got so twisted as to be interpreted as maligning athletes, some of whom spoke out against Trump to assure people that none of this talk went on in their workplace. Oakland A’s pitcher Sean Doolittle tweeted, “As an athlete, I've been in a locker room all my life and that's not locker room talk.” CNN’s Jake Tapper claimed to know it only happened in prison locker rooms.

“Locker room talk” is just a turn of phrase that Trump used to describe the ancient male ritual of explicit sexual banter, much of it exaggerated, that can go on between guys in any venue. It could be a locker room or a bar or a frat house, but this sort of talk does happen, even if Sean Doolittle’s missed it. Maybe most guys don't take it to Trump’s level, but if they had a Billy Bush, who’s just eating it up, in front of them, they might just decide to go for it.

Trump always takes things to another level when it comes to braggadocio. He's got the best brain, the best words, and attracts the world’s top models, so when he's got the perfect audience for boasting of his sexual powers, he's probably going to up the ante as high as he can when he sees he's on a roll. That he was holding one of the Bush clan in thrall probably added to his satisfaction.

There's no way of knowing whether or not Trump was being facetious in this raucous, embarrassing conversation. CNN’s Van Jones went all out and said Trump was confessing to sex crimes and that white male predators hide in plain sight while we focus on black men, but most of Trump's opponents, including Jones, have figured out by this time that he's a pathological liar. Suddenly we’re being told to believe he was telling the truth just this one time, and it's not convincing. Trump is a lout who’s unfit for office, but not because of what the Trump Tapes tell us.