Somebody tell the dopes at CNN. 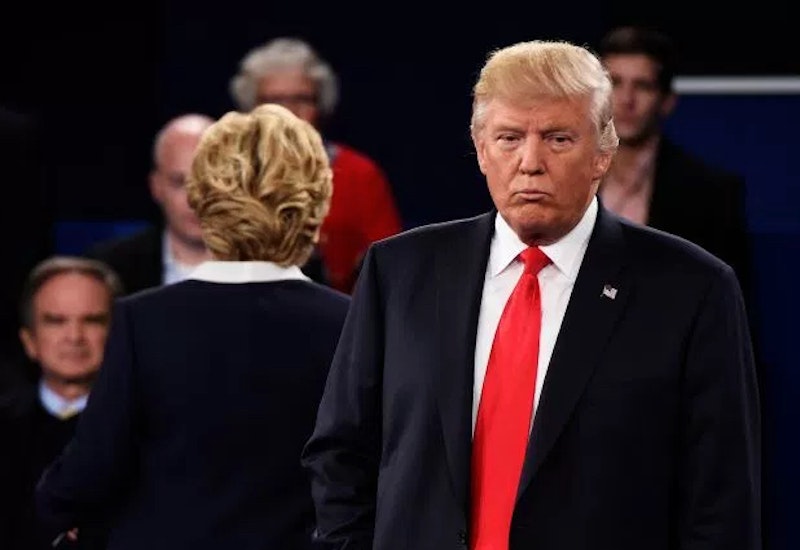 He threatened to prosecute her. Donald Trump said that if he becomes president, he’ll appoint someone to get the goods on his opponent. Politicians in the Third World do that. The president or premier sees about nailing the guy who ran against him, or the guy who was in there before him. Trump’s already been kicking dirt on the political system; when he says maybe the vote’s going to be rigged, he commits a sin abhorred by responsible politicians in Guatemala. Now he wants to put the Democratic presidential nominee in jail. He announced as much during the second presidential debate.

CNN’s panel didn’t seem to care. “Stanched the bleeding” was a phrase I heard, because this time they thought he didn’t sound too crazy or gross, not like in the first debate or his Access Hollywood star turn. Basically, I suspect, they liked that second-debate Trump was popping out far fewer of the one-word interruptions (“Wrong!”). But this thought had to be clothed. “I liked his response on Abraham Lincoln,” somebody said. “I think he scored points there.” Hillary had said that she believed politicians had to use different arguments with different people, as in the movie Lincoln. Trump’s response: “She lied. Now she's blaming the lie on the late great Abraham Lincoln. That's one that I haven’t—okay, Honest Abe never lied. That's the good thing. That’s the big difference between Abraham Lincoln and you. That’s a big, big difference—we're talking about some difference.” He never said what the lie was.

One reads that Mike Pence and other cautious Republicans had been hoping for a full Trump mea culpa regarding his catastrophic comments about meeting women. Trump didn’t come through. Instead he announced his thoughts about alleged nasty doings by his opponent and, especially, her husband. He laid the groundwork for this moment with a surprise pre-debate press conference featuring women who say Bill Clinton assaulted or raped them, plus a woman who feels Hillary victimized her when serving as defense attorney to the woman’s rapist. Before the first debate, Roger Stone fantasized by tweet about having Juanita Broaddrick (who says Bill Clinton raped her) sitting in the front row for the first debate. This time the Trump campaign seated Broaddrick and the three other accusers in the debate hall. Not front row, but fresh from repeating their accusations on national TV.

Chaos has always been threatening to make an appearance in the Trump-Hillary debates, and her husband’s alleged sex crimes have seemed like the way it would show up. Last night the topic finally erupted, and then, oddly, it stopped erupting. When Trump threw his accusations at her, Hillary didn’t defend herself or her husband. The choice makes sense regardless of guilt or innocence—go on TV and say you’re not a rapist, and you sound kind of like a rapist. The surprise is that Trump didn’t raise the matter again. Hillary raked him with the Access Hollywood tape and the Khans and birtherism. Trump fired back with the DNC emails and the deleted Hillary emails and “the two boxes of e-mails and other things last week taken from an office and are now missing.”

Then the moment occurred, the craziness that no one seems to recognize as crazy. The moment began the way such things often do around Trump. “I'll tell you what,” Trump said. “I didn’t think I’d say this and I’m going to say it and hate to say it.” Then the bombshell: “If I win, I’m going to instruct the attorney general to get a special prosecutor to look into your situation because there’s never been so many lies, so much deception.” A couple of minutes later Hillary adverted to this threat after advising people to consult her website’s fact-checking features. “It’s just awfully good that someone with the temperament of Donald Trump is not in charge of the law of our country,” she said.

“Because you’d be in jail,” said the man with the temperament.

The two didn’t shake hands at the start, because of Trump’s Access Hollywood remarks and his press conference with the accusers. But they did shake hands at the end. She had declared him unfit to be president, in so many words, and he had threatened to prosecute and imprison her. But habits die hard, I suppose, so they shook.

Respective friends and family issued onto the debate floor. The Trump people stuck together and didn’t smile. They appeared to be patrolling the area like floor walkers, trying to nail down the space as theirs, much as Trump had prowled about with his microphone during the debate. Hillary posed with a black woman from the audience and gave a big smile as the woman’s friend took a picture.

CNN’s panel said Hillary had been fine, but that really she’d just won on points. She knew more about policy, and she showed a better temperament than Trump, and… But really, she’d just been fine that’s all. Meanwhile, they said, Trump had stopped the bleeding.

Less impartial observers, reflecting on the press conference with Broaddrick and the others, might suggest that Hillary had been fine in the face of the most vicious mind-fuck in U.S. political history. Instead her opponent said it, or something like. When the candidates were asked to say something good about each other, Hillary mentioned Trump’s children. He responded with the best campaign analysis I heard last night: “I will say this about Hillary. She doesn’t quit. She doesn’t give up. I respect that. I tell it like it is. She is a fighter. I disagree with much of what she is fighting for. I do disagree with her judgment in many cases. But she does fight hard and she doesn't quit and she doesn't give up, and I consider that to be a very good trait.”

But he does want to put her in jail. Like the crowds shouting “Lock her up,” he figures an FBI investigation is no good if it doesn’t nail your political enemy. Hillary, like most other presidential candidates in U.S. history, isn’t of that view. There are a lot of ways in which she’s better than Trump. Now we have a new one. I hope people notice because that’s a big, big difference. We’re talking about some difference.