Donald Trump Likes to Threaten Women When He Debates 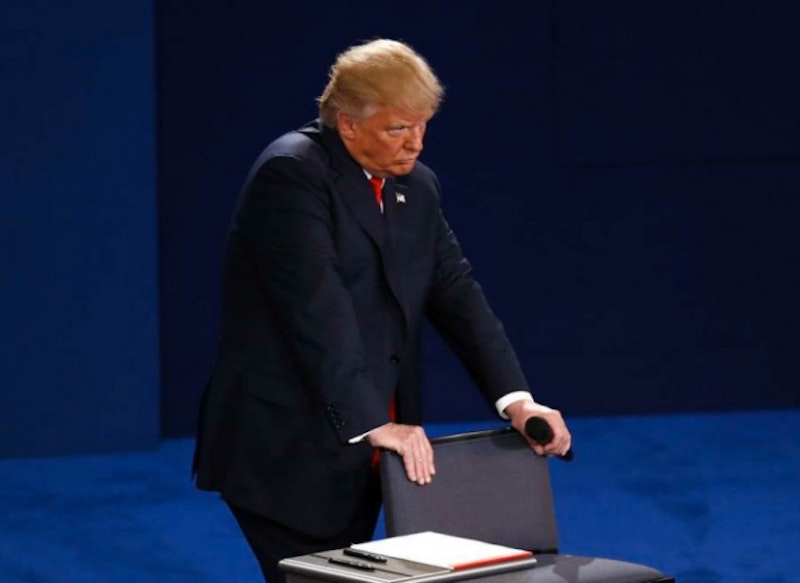 Donald Trump threatens women. I mean he makes threats against individual women. He says he’s going to get them. He says this during national political debates on TV. In fact he makes a habit of doing so.

The first debate he ever took part in, Trump said to Megyn Kelly “I’ve been very nice to you, although I could probably maybe not be, based on the way you have treated me. But I wouldn’t do that.” He took the time to get the point out there.

In his first debate as a presidential nominee, Trump began musing aloud. “But you want to know the truth?” he said. “I was going to say something...” Lester Holt, impatient, broke in: “Please, very quickly.” Trump pressed on: “...extremely rough to Hillary, to her family, and I said to myself, ‘I can’t do it. I just can’t do it. It’s inappropriate. It’s not nice.’”

Now, in his second debate as nominee, he has threatened to put Hillary in jail. He was pleased with himself when he said it. Hillary had just said it was a good thing he wasn’t in charge of the laws. “Because you’d be in jail,” Trump said, voice low and withering, quiet but thick. It was the voice of someone who has landed a dart. He swung away from her, and for a moment his small mouth made itself into a tight, tilted line.

In his whole life Trump will take part in one more presidential debate. In that debate he’s guaranteed to threaten his opponent again, in one way or another. This will give him a lifetime perfect record as a presidential nominee, plus his kickoff threat to Megyn Kelly. To compile a record like that, one must be involved in not so many presidential debates and a whole lot of threats against women.

Pussy tape. Why did the tape make such a difference? One reason is that the Republican Party needs women. The Party would like to have the votes of Latinos, and even of Muslims and blacks, but it needs the votes of women, and especially the votes of white women who have college degrees. The Party counts on winning that group, election after election. The Party just found out that this year it probably won’t. The GOP is stuck with a pussy-grabber-in-chief and must choose between its nominee and a key part of its voting coalition. Hence the party is convulsing.

The other reason applies more to the public’s reaction than the Party’s. Trump has said many things that wouldn’t occur to a non-bigot. But they haven’t been direct expressions of hatred. He makes up stories about Mexican rapists and disloyal Muslims, he tells us his doubts about Judge Curiel hearing his case, but he doesn’t say Mexicans are this or that, or that you can always tell Muslims because of their disgusting whatever. An ex-employee quotes Trump as saying the following: “I’ve got black accountants at Trump Castle and at Trump Plaza—black guys counting my money! I hate it. The only kind of people I want counting my money are short guys that wear yarmulkes every day… Laziness is a trait in blacks. It really is. I believe that. It’s not anything they can control.” Imagine if that were on tape and we saw his face. The pussy tape’s the sex-predator equivalent.

18th-century parallel. “It’s nice,” Trump sighed, bleak as he noted the injustice. “One on three,” he said. Anderson Cooper was insisting that Hillary’s emails had indeed been brought up, and that somebody in the audience had a question. Trump had to close his mouth and wait for proceedings to grind on.

One on three! Martha Raddatz and Anderson Cooper, the moderators. And Hillary, his opponent. Two women and a gay and there was Trump, penned among them. Two women and a gay man did for Poland. A great lump of a country sat in Europe, and then its neighbors collaborated on making it disappear. Maria Theresa of Austria, Catherine II of Russia and Frederick II of Prussia each took a slice of the victim. More slices followed, and Poland was gone before the century ended.

The Poland of long ago was a gross, unwieldy, barely governed thing that pitched itself about rather than settle on a considered course of action. Trump should take note, but luckily he won’t.