Pronouns, Peggy Noonan, and the worry that today’s hashtag movements will be tomorrow’s Trivial Pursuit answers. 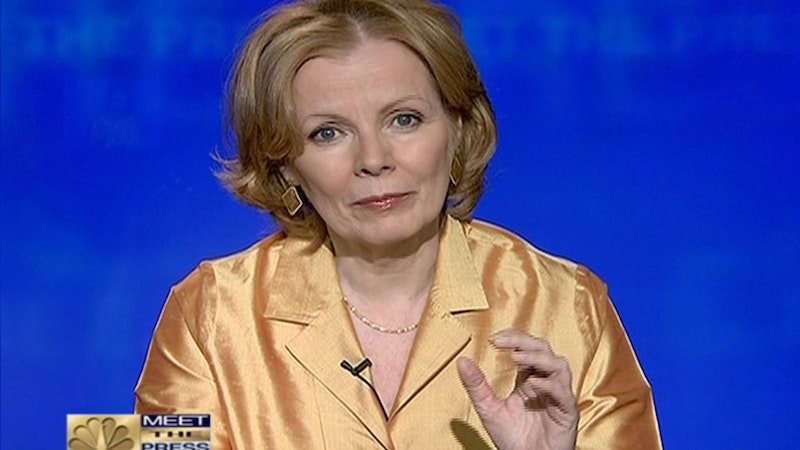 If you told me years ago that in 2019 people would freak out over the subject of pronouns, I wouldn’t have believed you. But it’s true: Sen. Elizabeth Warren displays her pronouns in her Twitter bio, and people get upset. Reactions from Twitter range from those begging to have Warren’s iPad taken away to jokes about her supposed Native American heritage. Columnist Meghan Daum—who got red-pilled by the Intellectual Dark Web last year—wrote that Warren displaying her pronouns on Twitter is another example of performative wokeness.

“If Warren got the nomination and found herself in the position of having to tamp down the lefty virtue signaling in order to appeal to would-be Trump voters,” she said, “I suspect those pronouns would be gone from that bio overnight. At least I hope they would. Because trans and nonbinary people need allies in elected office, not just on Twitter.”

Peggy Noonan of the Wall Street Journal went a step further and compared the current discourse over pronouns to the French Revolution. “We are being asked to memorize all this,” she wrote, “to change hundreds of years of grammar and usage, to accommodate the needs or demands of a group that perceives itself as beleaguered.” This new way of thinking about language, according to Noonan, is how Robespierre rose to power. I must be out-of-touch with the transgender rights movement because this is the first time I heard about any secret plot to guillotine people who refuse to use our pronouns.

What Daum and Noonan don’t realize is that displaying pronouns is useful. Involvement in the trans community has taught me that I can’t automatically assume people’s pronouns based on looks alone. I’ve met closted trans people who still present as their assigned gender at birth, as well as non-binary people who don’g present as androgynous. Also, on more than one occasion I’ve gone into fast food restaurants wearing makeup, eyeshadow, lipstick, and painted nails, only to have the cashier greet me with, “How can I help you, sir?”

There are two suggestions on how to avoid accidentally misgendering people. The first is to automatically refer to strangers by they/them pronouns, as I recently wrote for The Horizontal, but that can lead to even more unintentional misgendering. The second is for cis people to include their pronouns in their email signatures. “If someone is transitioning at work and only a few people know about it,” Jay Bendett of the Argo Collective blog writes, “sharing pronouns may out them before they’re ready. For a nonbinary person, sharing they/them pronouns often only sparks a lengthier conversation... rather than simply inform people.” Therefore, if more cis people include their pronouns in email signatures and Twitter bios, it makes it easier for trans and non-binary people to share their pronouns.

Daum does bring up a valid concern, as much as I hate to admit it. What if Warren’s pronouns are just for show? What if the current mainstream media discourse on transphobia, racism, and privilege is just Radical Chic 2.0? Trans journalist Katelyn Burns recently wrote for Vox about how many Democratic presidential candidates supported FOSTA-SESTA, which sparked more violence towards sex workers—many of whom are black trans women—than before. “Black trans women and other trans women of color deserve real policy proposals while they’re still alive,” she said, “rather than their deaths being used as stump speech applause lines and candidate hashtags.”

Also, if fellow Splice Today contributor Oliver Bateman is right, most journalists and influencers who talk about social justice are only in it for the money. Social justice is too important to be just another fad, but since political movements come and go and corporations love to cash in on human rights struggles, I worry that today’s hashtag movements will be tomorrow’s Trivial Pursuit answers.

I doubt Noonan’s prediction of a new transgender proletariat uprising against the cis bourgeoisie is going to happen, but Daum’s prediction might come true. I hope Warren will continue to support the trans community if she wins next year’s Democratic nomination. The current roster of contenders are talking about trans issues more than those in the past, but they could be just trying to garner votes. It won’t be the first time politicians played lip service to marginalized groups.