Is commercialization actually good for the LGBTQ population? 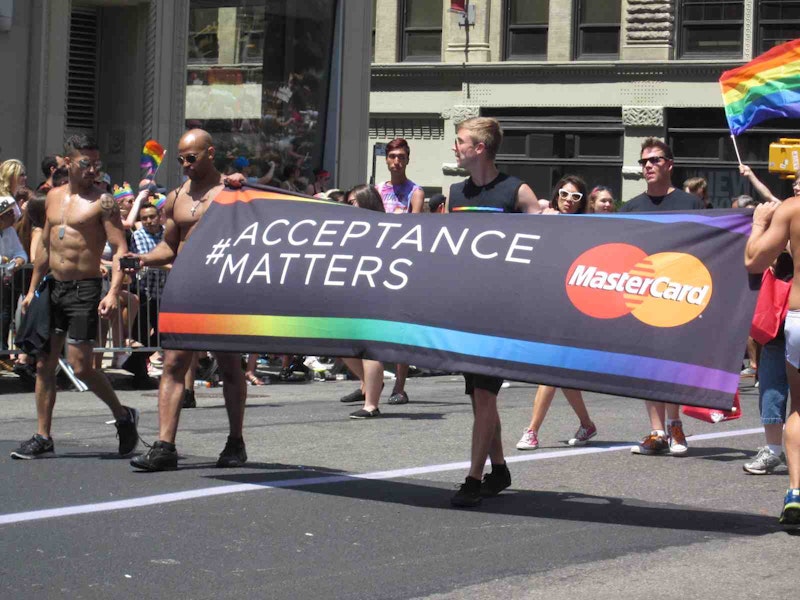 Budweiser recently teamed up with Pride in London to launch a new line of LGBTQ-themed cups for Pride Month. Each cup bears the colors of different pride flags: the rainbow gay pride flag with additional black and brown stripes, the trans pride flag, the bi pride, asexual, etc. “We wanted to create a campaign in partnership with all the people that make up the wider LGBTQ community in mind,” Budweiser Senior Brand Manager told Gay Star News, “and we worked closely with our friends at Pride in London to ensure that this campaign was as relevant to as many as possible.”

Budweiser isn’t the only company queering up its products. A few weeks ago Ralph Lauren launched a special line of clothing with the company’s polo player logo decked out in rainbow colors. Others include Harry’s special rainbow razors, pride color Converse All-Stars, and rainbow Michael Kors clothing. It’s different from when I grew up as a closeted queer and trans kid in the 1990s. Back then, you risked public outcry for not being an anti-LGBTQ bigot. But is this commercialization is actually good for the LGBTQ population, or are the companies just trying to make a buck?

Although it has become an Internet meme, technically the first Pride event was the Stonewall uprising; the 50th anniversary will be June 28th of this year. There were no colorful floats or rainbow beer cups on that night in 1969. Instead, people like Marsha P. Johnson and Sylvia Rivera fought back against the police after being harassed and humiliated for far too long. (There’s dispute about whether Johnson threw the first brick, but it doesn’t matter because she and Rivera were still LGBTQ rights pioneers.) Even the first official Pride march—the brainchild of bisexual activist Brenda Howard—was meant to commemorate Stonewall like a battle. As LGBTQ people gained more acceptance and equal rights, Pride became more of a celebration than a protest. That’s when big corporations took notice and decided to cash in.

But corporations don’t always practice what they preach. According to Vox, last year Adidas unveiled a line of Pride-themed products, but still sponsored the 2018 World Cup held in Russia, which has a horrendous record of anti-LGBTQ laws. Likewise pharmaceutical company Gilead, which manufactures PrEP pill Truvada, sponsored the 2018 New York City Pride, yet the pill costs thousands of dollars without insurance, which doesn’t help the countless LGBTQ people who can’t afford insurance.

Some corporations do give donate proceeds to LGBTQ organizations. According to Newsweek, both Harry’s Razors and Doc Martens are donating proceeds from their Pride-themed products to the The Trevor Project. However, as Alex Abad-Santos of Vox explains, “the money that companies make selling goods to people looking for an easy, straightforward way to help with a big, complicated issue rarely has tangible results, outside of the profits for the companies selling those goods.”

It doesn’t help that the most marginalized LGBTQ people don’t receive Pride merchandise proceeds. Numerous studies show that poverty is a huge problem within the LGBTQ population, especially bisexual women and trans women of color. “The aggregate effect of corporate involvement in Pride has been to make it more and more a month about travel and consumption,” writes Samantha Allen of The Daily Beast, “about rainbow-colored marketing and reactions to that marketing. It feels harder than ever to make LGBT financial struggles intelligible to a broader society that has never recognized them in the first place.”

There are many things corporations can do to support LGBTQ people besides sell rainbow merchandise every June. Brian Honigman of Forbes has a good list, including diversity training for staff, a strict anti-discrimination policy, and donating to local community causes. Companies can pay their employees liveable wages and provide health benefits that cover medical transitioning for transgender employees. Pride Month isn’t just about rainbows and glitter; it’s about total equity for all LGBTQ people.