Exiting Europe or the Manson Family. 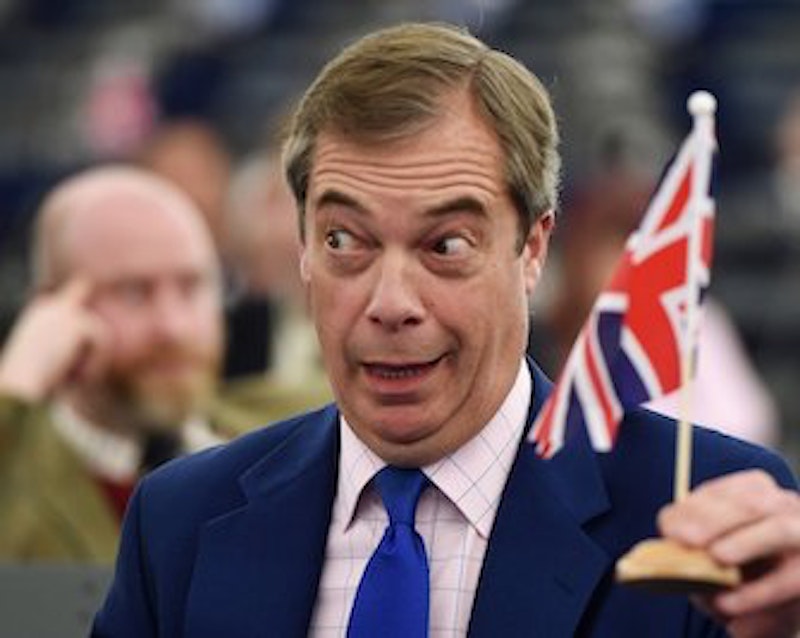 One of the simplest, most reliable tests of if you’re in a bad situation is whether you’re allowed to leave. Whether it’s a date, timeshare pitch, or political coalition, if you want out—for whatever reason—and the other party says no, it’s time to start thinking like a kidnapping victim. It’s time to examine your strategic options, as you might if you encountered the Manson Family 50 years ago or are part of the European Union today.

Like any real libertarian, I have to look with at least some sympathy upon the Brexit movement, even if I don’t agree with its supporters on every detail of their political agenda. The movement is gaining supporters around the world, too, and so Peggy Grande and others from the group World for Brexit [W4B.world] gathered interested listeners last week in Manhattan to hear speeches by Nigel Farage and other Brexit champions. Secession and decentralization may not be synonymous with liberty, but those forces usually can’t hurt in a world of centralized big-government bureaucracies.

As Grande notes, merely believing in democracy is a good reason to sympathize with Brexit at this point, since the people of the UK voted for it three years ago and still haven’t gotten their country out of the European Union.

“If we saw this happening in Cuba or Venezuela or other places around the world, we’d be outraged,” she told the crowd. With 57 percent of the UK populace still favoring Brexit in polls, little sign of economic catastrophe from the UK‘s plan to leave, the Remain forces are looking more anti-democratic than the purportedly far-right Brexiters, and Continental Europe is looking more like a source of political instability than a force for stability. Grande argues the usual four anti-Brexit arguments appear hollow.

In his remarks, Farage was frank about wanting Brexit to resonate beyond the UK, inspiring “the end of the globalist project that is the European Union.” He doesn’t dislike the individual countries of Europe, though: “I want a Europe of sovereign, independent nations.”

Farage added that far from dooming individual nations to be walled off by tariffs, he sees numerous instances in which the UK could be trading more freely with the U.S. right now but is stymied by byzantine EU regulations out of Brussels. What begins as a centralized referee meant to facilitate trade can become an authoritarian impediment to trade—as indeed has been the case with the creation and growth of the U.S.’s own federal government, sold to the public over two centuries ago in part as a means of eradicating trade barriers between the states.

While Farage acknowledged the strategic risks of splitting anti-left forces between the Conservative and Brexit parties, he’s buoyed, he said, by the fact that if you add Conservative to Brexit Party supporter numbers, “you smash hardcore socialism” in the UK.

A willingness to let people walk away is almost always a good sign. Contrast that willingness with, for instance, the threatening letter sent by a school board in Pennsylvania recently, telling parents that unless they pay past-due money they owe for school lunches, their children may be taken from them by force and placed in foster homes. Even when a rich CEO offered to swoop in and pay for the lunches to keep the families intact, the school board said, no, the parents must pay up. Bureaucracies don’t like to let go, and they don’t much care about the damage they do as a result.

In a world of bureaucrats who think they know best, maybe it’s no surprise that one of the current Democratic presidential candidates—indeed, the one most often pointed to as a centrist, John Delaney—wants to impose mandatory national service on the nation’s 18-year-olds. Sorry if you thought you were an adult with your own plans and schedule. A Democrat from Maryland is coming to show you you’re just a slave (though I could have sworn we heard some implying Maryland Democrats are the victims of authoritarian, slaver-like rumblings in the past few days).

If being allowed to leave is the most important moral litmus test, then the most moral scene in Quentin Tarantino’s surprisingly easygoing tour of 1969, the new Once Upon a Time in Hollywood, has to be the tense sequence in which the Brad Pitt character pays an unsuspecting visit to the Spahn Ranch where the Manson Family lives, lured in by cute young girls but soon worried that he ought to check on an elderly resident to make sure he isn’t being held hostage. It’s the right thing to do and an important sign the Pitt character, for all his flaws, has a dash of the cowboy heroism he mimics in his job as a stuntman.

I don’t deny that the loner, rugged-individualist mindset also has its risks. Check out, for example, the documentary A Gray State about a war vet turned paranoid libertarian who snapped and committed murder, or the 19th-century Nietzsche-like manifesto Might Makes Right that apparently helped inspire the California garlic festival spree killer this week. But you know instinctively you’ll rarely have as much cause to be creeped out by someone saying, “Let’s just go our separate ways” as by someone saying, “Sorry, I can’t unlock that door and let you out just yet. You’ll just have to stay here with us and trust that we know what’s best.”