Amy Klobuchar is obsessed with death. Only Marianne Williamson can help. 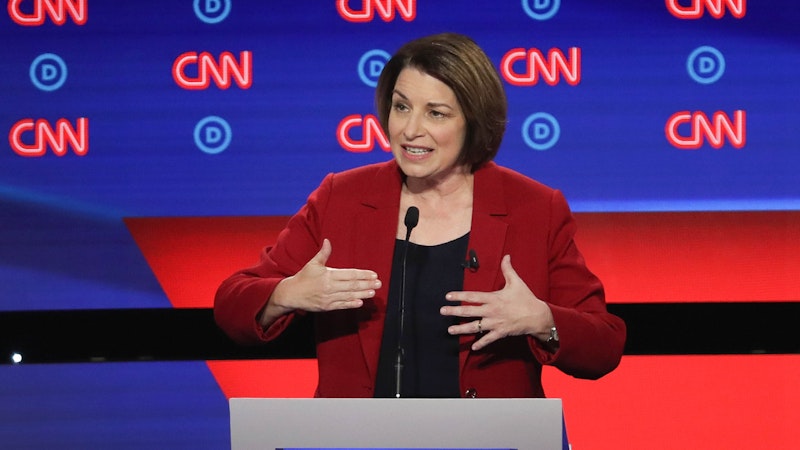 I'm just glad it's not me up there, with 15 seconds before Jake Tapper overruns me, trying to keep my ego inflated enough to persuade you that I think I can run the free world (or at any rate the world in which we live) and that you ought to send me money. As I tried to persuade you, I'd be in an embarrassing situation, pooping out mini-nuggets and getting interrupted a lot. It'd just be too embarrassing: you'd feel my desperation as I tried to manufacture a "breakthrough moment" on demand.

I imagine the candidates going to the hotel afterward and addressing the face in the mirror: Are you really doing this voluntarily? Why? Actually, I wouldn't want to vote for someone who didn't think that sort of thing now and then. They'd be suffering from Marianne Williamson messianism.

Like "second-tier" candidates everywhere, I really do need a professional and psychological breakthrough moment, but I don't think I can force one out on demand in any given 45 seconds. As with John Hickenlooper, it may be that my breakthrough moment never comes. As I realized that at 9:26 last night, I started sobbing and missed Hickenlooper saying something.

Somewhere during the evening, Will Wilkinson tweeted, "Warren and Delaney are my personal Jekyll and Hyde," though if Delaney is your Hyde, you're a pretty darn mild person, whereas if Warren is your Hyde you're being all sexist. But that's when it struck me that each of these 20 people is a five percent portion of my own consciousness, like all things in the universe according to Marianne Williamson. I was cosmically alone last night (except for my cat, also an aspect of my consciousness), and I found myself floating into my flat-screen, into an hours-long psychodrama, a kind of semi-lucid dream, in which various progressive parts of me were battering and being battered by moderate parts of myself. If we pass the Green New Deal, every aspect of myself will have a job, which sounds exhausting. Thirty percent of me, I learned as I watched, is female, and five percent is out-of-the-closet gay, which sounds about right, though I'm going to repress it. I'm a little bit self-help author and a little bit Hickenlooper.

Bernie and Liz both did well. They made fewer bizarre verbal mistakes than average, got closer to competent English syntax, seemed less rattled than most, though I'm always a bit concerned that Bernie is going to "blow." The Green New Deal is going over great with Democratic audiences, to the point where if you don't guarantee everyone a job or call for $20,000,000,000,000.00 to fight climate change, you're just rehearsing Republican talking points. None of the people in the "moderate lane" last night distinguished themselves.

Klobuchar appears to be the portion of my consciousness that’s death-bent, my very own Thanatos. The “anecdotal” approach in which the candidate throws out a name and tells a skeletal story trying to manufacture a symbol of something has always seemed particularly manipulative, disingenuous, and useless to me, though it's gone on for decades because it worked for Bill Clinton. Klobuchar took it to the next level last night, until it seemed that talking to Amy Klobuchar is fatal. And as death approaches, her syntax breaks down almost to Bidenesque levels.

"I've got my friend, Nicole, out there whose son actually died trying to ration his insulin as a restaurant manager. And he died because he didn't have enough money to pay for it."

KLOBUCHAR: We understand when six little—little six-year-old boy died, Stephen Romero, when his dad said he’s only six years old, all I can…

"And out there today is Casey Jo's mom. Casey Jo was a champion high school swimmer from a small town. She got sick, went to the emergency room, and got hooked on opioids. The last thing that she said to her mom was, ‘Mama, it's not my fault.’ And she died."

Only Marianne can explain the meaning of that, really. And you're just going to have to ditch the alleged names and personal anecdotes when Lemon's giving you 15 seconds, or else you just keep cutting to end: "And they all died," which might also be Klobuchar's climate-change plan.

A few assessments. Delaney got his clock cleaned by Warren. Bullock started strong but devolved into vague confusion. Tim Ryan picked up some speed as he went along, and I'd like to hear more from him on "biological farming" to ameliorate climate change. His "new and better" is not much of a slogan, however, and he’s not long for the campaign. Buttigieg had an odd moment in the middle in which he appeared to lurch randomly into his closing statement. The mo has slowed. One no longer has to mention Beto.

Man, it’s amazing how well Marianne Williamson did on Twitter. People started declaring her victory early and kept right on. I see why. She runs a little deeper than American politicians do about the meaning of politics. Her positions hang together better than anyone's, appearing to emerge from a deeper source. She might’ve tipped me over the edge into supporting reparations. However, that big old Course in Miracles belief system is quite unlikely to be true.

The solution, according to Williamson "will emerge from something I'm the one who's qualified to bring forth," which seemed to betray a bit of "I alone can fix it" Trumpery. On the other hand I don't know that anyone else can fix it either.

The best moment belonged to Warren, who dealt with "electability" in a notably rational way: "I remember when people said Barack Obama couldn't get elected. Shoot, I remember when people said Donald Trump couldn't get elected. But here's where we are. I get it. There is a lot at stake, and people are scared. But we can't choose a candidate we don't believe in just because we're too scared to do anything else. And we can't ask other people to vote for a candidate we don't believe in." That should take Biden out too. I just wish these people would stop saying "I get it," like they're desperately trying to catch up with the joke.

Whether this whole thing is happening in my head or in the actual world, I think Warren is going to be the nominee.