Mare Tralla’s performance piece is moralistic and politically correct, but ultimately, no one is evaluating her art aesthetically. 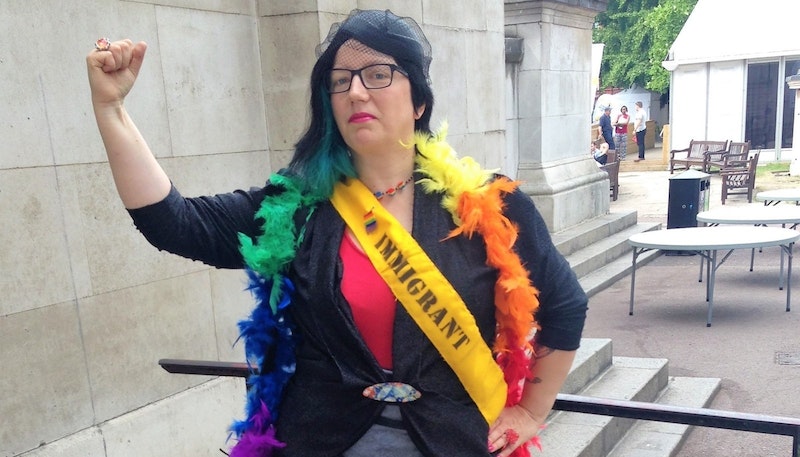 As if we needed yet another faux outrage, last week a photograph of a naked woman caused an uproar on Twitter. The woman in question is an Estonian, self-described “interdisciplinary artist, organizer and activist,” Mare Tralla, and the photograph showed Tralla flashing her naked body in front of a group of teenage boys. The boys, who were most likely visiting the gallery as part of a school field trip, looked disinterested in what Tralla was attempting to do. In fact, one of the boys, sporting a NASA sweatshirt, had that look and attitude of a teenage boy who transcends every cultural barrier—"art is boring, can’t we just go home already?”

The photograph was a small part of the performative act by Tralla. There’s also a video, in which she enters the gallery (already naked), takes off what appear to be lime green Birkenstock sandals, and proceeds to cover the paintings by a male artist, whose work she deems sexist and misogynistic. Tralla moved around the gallery space with determination and silence, while the onlookers and what appeared to be members of the Estonian media, took pictures with either amused, bored, or uncomfortable faces.

Tralla’s body made an impact on the audience partly because she was naked, and partly because she looked like one of Lucian Freud’s models who transposed herself from the static world of a painting into full-frontal malleable plasticity. Tralla looked like a less exaggerated version of Freud’s painting, “Benefits Supervisor Sleeping II” (1995), and as she moved with determination to prove the existence of misogyny and sexism in art and Estonian society in general, her pale flesh jiggled left and right, up and down. She didn’t seem to care.

The reactions to this varied from how brave she is to fight the patriarchy to not only denouncing the artistic attempt but also accusing Tralla of sexually abusing the boys in the picture. None make any rational sense. When it comes to addressing the accusation that she’s in some way enacting sexual abuse, we can safely say that Tralla hasn’t done anything to physically harm the boys, and I doubt that the boys will be traumatized. The world is full of chaos and perversion, and the boys will look away in boredom, disgust, or both. That was most likely Tralla’s intention—to show that all masculinity is toxic because the boy’s gaze is on the path of becoming that awful, poisonous “male gaze.”

The problem with that assertion is that Tralla (like most feminists) forgets the human phenomenological reactions that are immediate and direct. Most people, whether adults or teenage boys, will either feel embarrassment for Tralla or look away because the sagginess of the fat flesh is not beautiful by any standards. She may have inherent dignity as a human being, but she has erased any exterior dignity by wandering the gallery naked, trying to express the rawness that all artists/activists seem to be fond of today. In the process, however, she has lost her humanity.

The second issue with this event has to do with the people who find her brave in her performative art. Just like the chorus that’s screaming “sexual abuse!,” the supporters of her act don’t seem to have any aesthetic judgment. They’re getting on Tralla’s political and ideological bandwagon and claiming PC moralism, and ultimately, they’re not evaluating her supposedly artistic act aesthetically. But the situation then unravels another set of problems, namely whether Tralla’s little performance piece can really be evaluated aesthetically? What criteria should be used to judge it in such a way? If there are no criteria, and if we can’t even mention words such as “ugliness” or “beauty” when judging art, then could we not say that the critics who took a (albeit extreme) moral approach (“sex abuse”) had no choice but to make such a judgment?

Sometimes performance art can be done well. Marina Abramović is the founding mother of post-modern performance art and I’d say that this form has been perfected and enacted appropriately. Love it or hate it (generally, I’m not in favor of deconstructive performance art), but Abramović’s acts have philosophical and artistic foundations, and are lending themselves to being evaluated aesthetically.

This isn’t the case with Tralla, or any more recent attempts at performance art (“The Mattress Girl” comes to mind). The problem rests on the fact that art for art’s sake doesn’t exist anymore. Everything is political and ideological. Even the paintings that Tralla was performatively boycotting and ultimately censoring were merely a series of nudes that involved some kind of tepid violence against female nudity. Just like Tralla’s act, this too only perpetuates dullness in art. There’s absolutely nothing in either one of these expressions that alludes to perennial questions about beauty. Even ugliness can be beautiful but in order for it reach that point, it has to be human and free of political manifestos.