All the Words I Didn’t Write

Oliver Bateman reflects on a half-decade in the hot-take trenches. 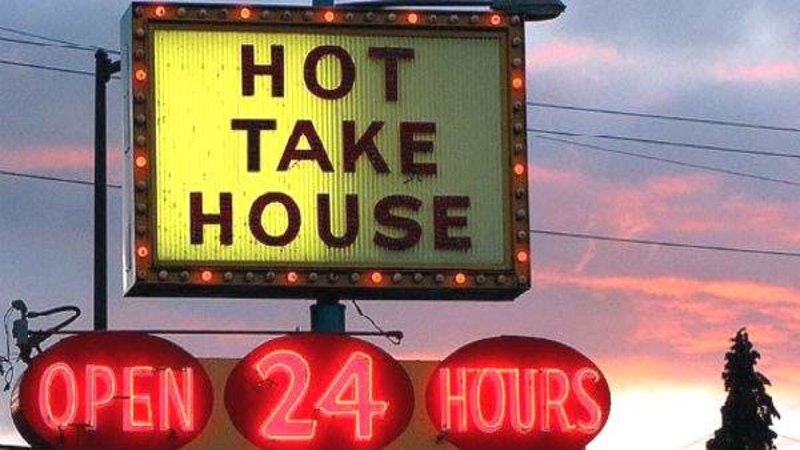 Since I began writing for pay back in 2011, I’ve sold around 450 articles. Roughly 100 of them went to Splice Today, and all of those are solid. Nor do I have any regrets about copy filed for The Ringer or MEL Magazine. These are the three publications where the bulk of my work now appears, with offbeat or artsy stuff going in Splice Today, features in MEL, and wrestler obituaries in the Ringer. But I’m far from happy with everything that bears my byline, especially the work I produced during a year—2017—when I was freelancing without a day job and thus without a net. Some of that material got a little too close for comfort to the shallow end of the hot-take waters; some of it was sold merely to fertilize the soil for the sales of subsequent takes.

For starters, the only hot take I ever sold to Teen Vogue amounted to nothing more than cynical careerism. Every freelancer apparently dreams of publishing there and then hitting it big like Lauren Duca, who fashioned influence out of thin air by merging the trending terms “gaslighting” and “Trump” into a potent thumbsucker of a take. Never mind that Duca, who’s unknown to everyone not involved in hot-take writing and probably only known to half of the people working in those take trenches, is as much a non-entity as the rest of us. At any rate, the pay at Teen Vogue is abysmal, unless you want to lie to your friends and tell them it isn’t because you’re rich and get off entirely on byline prestige.

The low pay is amusing because Teen Vogue employs or at least maintains a 1099 contractor relationship with a dedicated labor columnist. But so it goes with nearly every such liberal-courting publication, whether well-funded (publisher Conde Nast is doing okay... probably, maybe) or merely surviving in the wokeconomy (plenty of radlib rags stand ready to pay you in sweat equity, [insert DSA-approved replacement for “comrade” here]). My piece was about old sitcoms on Netflix and how they are problematic, which wasn’t so much about the sitcoms being problematic as intended to remind readers that all present aspects of their lives will be viewed as problematic if not outright pathetic by the generations succeeding them. It took a year to publish it because that particular editor kept “looping around” and “digging out of e-mail” and I wasn’t happy with the resulting vanilla copy, although I suppose I can go to my grave as the only person to have referenced historian Carl Becker in the e-pages of Teen Vogue. But who cares, really?

I also sold a lot of “alt-right” coverage back in 2015 and early 2016, when most editors were still holding the line against buying it, because I felt there were at least a few things (not many) to say about this subject. I regret that stuff too, in part because it led to a flood of much worse, much less nuanced coverage of whatever this movement was or is —coverage that came into existence primarily because thought leaders like @ricky_vaughn could be interviewed right over Twitter, a must in the age of zero-dollar budgets for travel expenses. The coverage exacerbated the problem, as I told Whitney Phillips in a long article about media amplification she wrote last year, and in the process created a great big something out of a mishmashed nothingburger. Sad, cellar-dwelling gamers and repulsive plastic surgery addicts like David Duke were suddenly scaring cloistered Brooklynite hot-take hustlers the way meatheads at the lunch table once did, a phenomenon that perhaps led to ludicrous hot takes like the one in The New York Times about how “jocks” were better than “nerds” (I parodied that piece for Splice Today). I also wrote three articles in which “Milo” featured prominently in the heading or subheading, and that was three too many, and appeared on one BBC program with him, which was one too many. Trash all the way down.

Most of my Paris Review essays were okay, and they certainly had their share of interested skim-readers, but I think I went too far in my critique of Kevin Smith and 1990s nerd fandom. Those alpha nerds, Hawaiian shirt and hockey jersey-clad blimps who achieved total pop culture immersion during the dying days of Generation X and Web 1.0, at least enjoyed much of what they consumed and collected, even if their enjoyment consisted entirely of memorizing names, dates, and other trivial ephemera. The class of people who’ve replaced them, extremely online culture vultures who not only don’t read or watch but can barely be bothered to take a gander at social media feeds not their own, are in many ways far worse, although they’re much better than their predecessors at toeing the fast-shifting wokeconomic company line regarding social justice “netiquette.”

The piece I regret the most was a VICE story about “how video games created the Bernie Bros.” This was a nonsensical title foisted on the article by the editor around the time “Bernie Bro,” which has apparently given way to “Strasserite” and “redbrown” and various other slurs, was then coming into vogue. At the time, I didn’t care about the editor’s change—I considered myself both a stereotypical “bro,” at least superficially and in the eyes of others, as well as a Sanders supporter—and I wasn’t yet aware of the ways that this divisive term would drive a wedge into the large, disorganized “cultural left” always in danger of fragmenting over Westworld episode summaries and the wearing of makeup by babies (sexualizing or sex-positive? The choice is yours!). The point of my piece, much simpler in execution and written a few months prior to the inclusion of Sanders’ name, was merely that exposure to halfway balanced video game rulesets might make at least some gamers predisposed to revolt against an imbalanced socioeconomic system that let the rich play on the easiest settings imaginable.

But that point became lost in the “Bernie Bro” furor, and although the controversy had no long-term impact on my writing career, it remains something that rankles me. By that time, VICE had already mangled a few of my other stories, such as a slice of life vignette about working at the Golden Corral, but I’ve since managed to re-work most of those into pieces much closer to my original vision. Among the dozens of pieces and takes I filed for VICE, only my essays about how horrifying CGI-heavy PG-13 action films are and why wrestling video games suck have stood the test of time. The rest might be fine, deep dives into video games like Mutant League Football and Freedom Force, but they’re also merely good content I exchanged for okay money.

Ive no regrets whatsoever about the pieces I wrote about inflating my grades, leaving academia, or doing away with grading and testing altogether (one such piece appeared in Splice Today). I detested academia then and like it even less now. It’s a world where the dead are worshipped, a world where underpaid adjuncts and cunning careerists who either can’t or don’t care less sell bankrupt ideas divorced from their meanings to overpaying customers who don’t know any better. To hell with all of that.

I loathed even my brief forays into trying to “build the brand” or “expand my influence.” My brand, such as it is, consists primarily of clean copy turned around rapidly. I’m well qualified to write about a couple of topics, such as the crotch bulges of bodybuilders or the legacy of boxing star Butterbean, and I occupy that lane unless I’m made an offer no rational freelance actor can refuse. The personal essays I write these days aren’t dumb mash-ups forced on me by editors, like the “shitty media man” of “shitty media men” list fame who had me shoehorn Donald Trump into an otherwise well-written and heartfelt essay about my father (I actually worked for a half-dozen of those goons, which shows what a small, incestuous community the publishing world is).

I’ll still write such essays, especially for the right amount of money, but I won’t tie in all of these passing fads and fancies and I won’t acknowledge a bunch of extremely online shibboleths (“gaslighting,” “toxic masculinity”) merely to drive engagement. That’s dumb, and makes the pieces go stale within seconds instead of minutes. The shelf lives of these soul-baring assignments are encumbered by so much “right now” that they arrive more badly dated than earlier efforts by “toxic” males (n.b.: all males must be referred to as “toxic,” per the AP Stylebook) such as Henry Adams, George Sand, George Eliot, Montaigne, and Aeschylus.

One of my journalism professors used to joke that the goal of the career-oriented writer was to rise high enough in the editorial ranks that they’d never have to read or write copy again. All the great captains of the “creative” industry refused to watch films or read books, he assured us. At that level, even one-sentence summaries were pushing the envelope, since the power player on the receiving end of the sentence was simply too “busy” with how busy they supposedly were to ever be bothered with thinking about it. He assured us that, were we sufficiently successful, we would eventually reach a point when we could afford to stop absorbing new information altogether.

For his part, he couldn’t remember writing, much less reading, any of the books that got him tenure, which, far from freeing him to do more and better research, had actually allowed him to avoid research altogether. He offered us a corollary to Sturgeon’s Law, which held that “90% of film, literature, consumer goods, etc. is crap,” noting that the remaining 10 percent ought to be locked away in libraries, far from the aspirants who might wrongly believe they could eke out a living doing good work.

Because you can’t eke out a living doing good work, you know. The only work they’ll pay you for is bad work done quickly, or hard work that you hate, because many “creatives” are so deluded they’d actually pay for the opportunity to make their great art. That’s the nature of this business, which sucks, as well as the related lines of business in which I’ve worked, most of which merely blow. Living’s mostly wasting time, and writing’s mostly wasting words. I’ve got all the wasted words here for you, and I can assure you that they’re the best words. If they weren’t, why wouldn’t I waste them on someone else, or no one at all?