Dehumanizing language is her specialty. 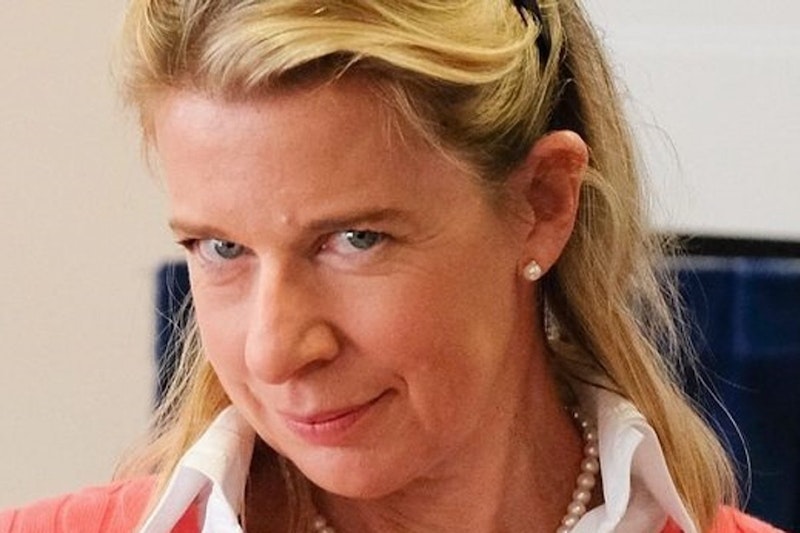 Back in August, British media personality Katie Hopkins, who propelled herself into the limelight in 2007 with her boorish comportment on the UK version of The Apprentice, tweeted some complimentary words about Donald Trump making time for ordinary people and caring about the regular voter. The President, a glutton for flattery, replied, “Thank you Katie.” Trump took some flak for retweeting Hopkins, as he'd done about 10 times previously, but Americans don't know the 44-year-old self-described "alpha female,” so the damage was contained.

Left-wingers were once again fuming over Trump spreading the word of a “white supremacist,” but their promiscuous use of that term has neutered it, even when it's applicable—"The Boy Who Called Wolf" syndrome. Don't bother trying to explain that one to them, however, as psycholinguistics isn't their strong point.

Perhaps Americans would’ve reacted differently had they known, in the immediate aftermath of the Islamist terror attack on the Ariana Grande concert in Manchester, England in 2017, Hopkins let her guard down and tweeted that it was time for a “final solution.” While she subsequently claimed there was a typo involved, before deleting the tweet, she couldn't finesse away the clear Holocaust reference. Broadcaster LBC fired Hopkins from her weekly radio show.

The professional controversialist from Barnstaple, Devon once wrote an article for the Daily Mail, "Rescue boats? I'd use gunships to stop migrants," calling migrants "cockroaches" and "feral humans."

It would’ve gone worse for Trump if, instead of Hopkins, he'd retweeted alt-right leader Richard Spencer a dozen or so times, but Spencer's never made public statements anywhere as near as inflammatory as calling for a final solution for any ethnic group, or calling people feral humans. If Trump ever said, "Thanks, Richard,” after receiving a compliment from the white nationalist, all hell would break loose, but saying it to a British white nationalist—who once tweeted, “Dear black people. If your lives matter why do you stab and shoot each other so much”—is somehow a lesser offense.

Perhaps Trump, who called Mexicans rapists in the speech kicking off his presidential run, is fond of Hopkins because she shares his views on non-white refugees and immigrants. Judging from his past comments, it wouldn't be unreasonable to surmise that the President wouldn't object to something else Hopkins wrote about them for the Sun: “They are built to survive a nuclear bomb. They are survivors.”

Hitler could’ve said that about the Jews, just before he proposed that ovens be used to ensure that they don't survive. The sort of dehumanizing language Hopkins favors isn't to be taken lightly. Hutus involved in the Rwanda genocide used to call Tutsis cockroaches who needed to be weeded out. The Nazis referred to Jews as “rats” and “untermenschen”—subhumans.

Going back as far as ancient Chinese, Egyptian and Mesopotamian civilizations, carefully chosen language has been used to dehumanize people, sometimes in preparation for extermination. It's comforting to think of the Nazi Germans as a unique species of evil humans, but it's not true. They were ordinary people swept up in a sickening movement. Once such an idea gains purchase in the collective consciousness, people can quickly become bloodthirsty.

Trump would be taking more heat for being a Twitter buddy to British anti-Islam activist Tommy Robinson, the most despised person in the UK among the urban elite. But the native of Luton, England has at least taken the time to read the Quran and formulate some coherent criticisms of the book, and Islam in general. He hasn't compared any one group to ineradicable vermin either.

That the President is advancing the views and the reputation of Katie Hopkins, who once called herself the "new Jesus," is at least as disturbing as telling American citizens to return to their shithole countries or marking up an official weather map with a Sharpie, but you wouldn't know that by the media reaction. Trump once called Hopkins a "respected columnist" for the Daily Mail, a garbage tabloid. Sure, and Sean Hannity's a respected journalist.

Due to Trump's influence, Hopkins has now become a regular commentator on Fox News, while she remains a loathed fringe figure back home. That's nothing to be sloughed off. The Hitler comparison's way overused in the Trump era, but of all the public figures to whom it's been applied, outside of actual neo-Nazis, Hopkins' language resembles that of Hitler more than any of them.