Trump’s Reelection Campaign is Behind Schedule 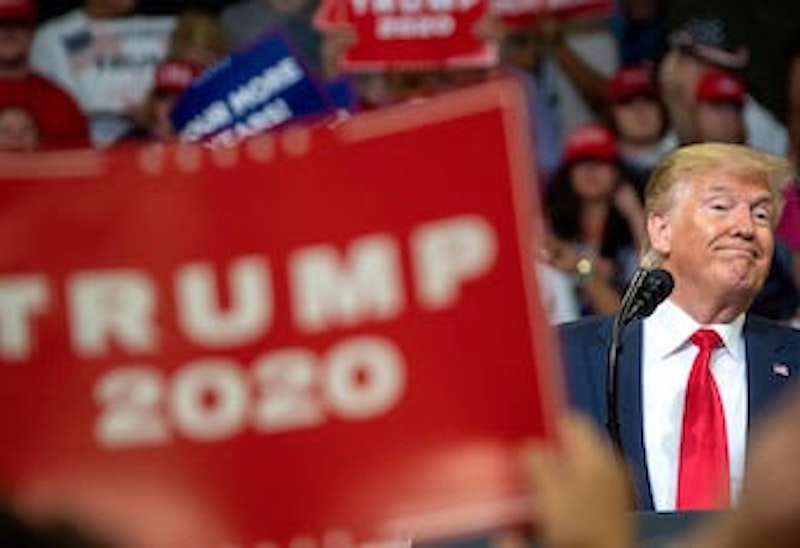 Whoever wins the 2020 Democratic presidential nomination, he/she will earn the prize of running against WWE Hall of Famer, former steak salesman and incumbent president Donald Trump. Although presidential elections tend to favor incumbents when the economy is not in shambles or there's no serious third party challenger (Ross Perot, Teddy Roosevelt, etc.), this upcoming election is up for grabs. While the Democrats continue to fight over differences which seem small to those outside of their party, there is still one major factor that needs to be addressed on the Republican side: what exactly is Trump running on this time around?

The basic messaging for Trump in his 2016 campaign, although not terribly popular, was clear: build a wall along the U.S.-Mexico border (and have Mexico pay for it), repeal and replace Obamacare, cut taxes, rework trade agreements, arrest Hillary Clinton, deport illegal immigrants and so on. However, this time around, he’s running on the slogans, "Promises made, promises kept" and "Keep America Great." He's labeled the opposition "socialists," taken credit for the economy being in decent shape and bragged about his achievements: getting rid of the Obamacare individual mandate, cutting taxes, securing border wall funding, altering and abandoning trade agreements, replacing a pair of Supreme Court justices, etc.

Surprisingly, he hasn't bragged much about legalizing industrial hemp and CBD—something that was long overdue. As far as policies go in 2020, however, you ask: does he have anything? If one went to his website now, they’d notice that there’s no page laying out his 2020 policy platform. It's not something he talks about in his rallies either—like one in New Hampshire last month. Surely, not being a progressive, having an R next to his name and sitting on the policies he did put forth when Republicans controlled Congress are enough for some people to vote for him.

Still, problems persist in the country—and Trump hasn't fixed all of them. No politician ever will, but it doesn't mean it’s a good idea to run on simply being the guy who beat the deathly unpopular Hillary Clinton in some Midwestern states because she slacked on campaigning. Bringing some new ideas and focuses to the forefront, you’d think, would be ongoing.

Doing so provided President George W. Bush with a boon in the polls following the 2004 Republican convention. Bush spoke in favor of policies which he thought would help ordinary American families like simplifying the tax code, a large jobs training program for community colleges, allowing small businesses to pool together in the health insurance market, establishing opportunity zones, and reforming Social Security to prevent it from running out of money. After that, Bush led John Kerry in the polls by several points (a lead that would shrink) and went on to win both the popular vote and Electoral College, the only time a Republican has done it since 1988. Granted, Bush didn’t leave office with high approval ratings and one could argue about the effectiveness of some of his ideas, but he presented some nonetheless.

It’d be great if every candidate took the Andrew Yang route and put up nearly 100 policies they have online—some good, some not—so people know exactly what they want to accomplish. Bringing some pragmatic policies to the forefront of his campaign would likely help Trump. Congress will likely end up split after 2020 with Republicans maintaining the Senate and Democrats keeping the House, so opportunity for legislative achievement will be limited for whoever wins next year's election.

Like the Democrats, there are plenty of palatable ideas for Trump to run on. Emphasizing school choice is an appealing right-wing policy for parents, something which 67 percent of Americans support. Implementing E-Verify nationally would likely be a more effective and popular way to deter illegal immigration than physical barriers and family separation. Trump could rehash a moderate version of Milton Friedman's idea for a universal catastrophic health insurance program as a cheaper alternative to Obamacare ($72 billion less in federal spending annually, according to the Niskanen Center’s estimation of their plan for it) that would cover every American.

Getting on board with marijuana legalization on the basis of limited government and economic growth wouldn't hurt either. Perhaps Trump could talk about balancing the budget, not that anyone would take him seriously at this point, or at least reducing the debt-to-GDP ratio to a point where it does not inhibit economic growth.

Maybe Trump has some grand secret 2020 platform he’s not telling anyone about. Probably not, but giving the American people some policy proposals that would positively impact their everyday lives is what either major party candidate needs to do to win in 2020.