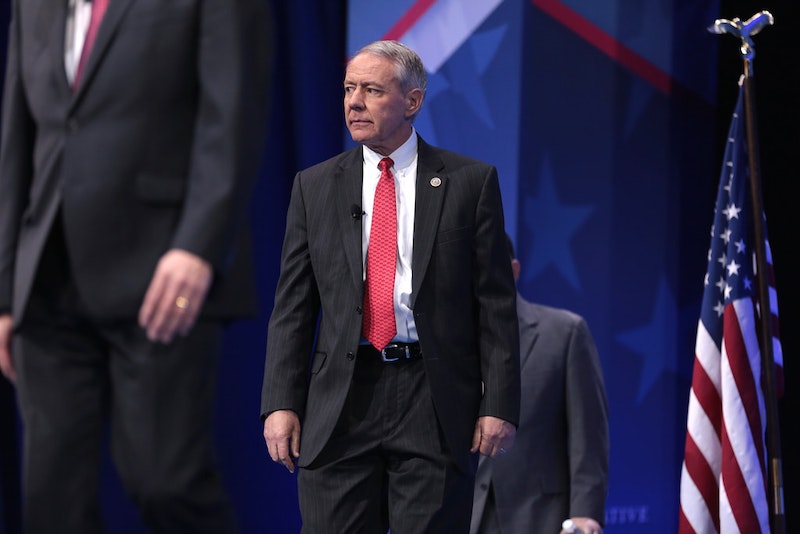 Congressman Ken Buck (R-CO) didn't go to Washington D.C. to make friends, which he's emphatically announced by writing Drain the Swamp: How Washington Corruption Is Worse Than You Think,” a recently-published insider analysis of the clubby, avaricious nature of the nation's capital. The status quo is, in his words, “an insular process directed by power-hungry party elites who live like kings and govern like bullies.” If Buck’s correct about who’s in the crosshairs of these greedy elites, then he'd better watch his back.

Buck writes about knowing right away something was amiss when, after being elected in 2014, he was invited to a series of elaborate social events as part of his orientation period. There were feasts, free iPhones, and laptops. If you play along and follow the rules of the Swamp, plenty more rewards are in store for you.

Early on in his exposé, Buck lays out how committee memberships are attained, and then retained. If you're on a coveted committee such as Appropriations, Ways and Means, or Financial Services, you must raise $450,000 over the next two years for the GOP’s House campaign arm in order to keep your seat. If you chair the committee, the price is $1.2 million. It's pay to play all the way in D.C., even within your own party. Its no wonder so many members of Congress spend so much of their time back in their districts rather than working in D.C. for the voters. The system's rigged to favor the already powerful.

This rankles the former Princeton football player, as does just about everything else about the way Washington, D.C. operates. He doesn't like the fact that, unlike many of his colleagues, heavily-funded special interests will spend what it takes to maintain legislation favoring them. Big business, he explains, wants more regulation because it gives it an advantage over smaller competition. Republicans go along with it, despite all their claims about wanting to strip it away. Consequently, the long-term interests of the people are routinely pushed aside in favor of short-term deals cut in back rooms by “fat and happy alligators who feel pretty darn comfortable in the swamp.”

As one of the founding members of the Freedom Caucus, it's no surprise that one of Buck’s top priorities is achieving a balanced budget. He favors a balanced budget amendment to the U.S. Constitution, which would put the brakes on big money politics, he writes, and restore fiscal discipline to Congress. Forced to keep spending in check, lawmakers would no longer have the leeway “to give everybody everything they wanted” in spending bills.

While cutting wasteful spending should be the goal of every member of Congress, Buck’s an alarmist on the issue. According to him, “America is going broke fast,” which is something Republican politicians have been assuring us of forever while simultaneously cutting taxes on the upper income brackets and upping defense spending. Its code for “We need to cut entitlements fast.” “Options for responding to China's threats are limited by the reality that we owe a lot of money to China,“ the panicky congressman informs us, but the first ever Pentagon assessmemt of the topic says this isn't the case, because any attempt by the Chinese to use financial coercion would “do more harm to China than to the United States.”

The Congressman gets in some shots at the Export-Import Bank, which he describes as a slush fund for corporate welfare. After WWII, the bank was instrumental in helping Europe and the USSR rebuild, but now it's what he calls a “lobbyist’s playground” benefitting huge corporations like Boeing and GE. He also makes good points about the “Zombie government” where sunset provisions that used to end some federal programs after five years no longer are enforced, leading to perpetual funding of programs that have outlived their original intent.

The main flaw in the book is its author devoting so much of it to a topic he's confused about. He mistakenly thinks the U.S. government operates under the same general financial constraints as a household and reaches incorrect conclusions as a result. That aside, Buck does make valid points his more collegial colleagues shy away from. Buck should be commended for publishing this book during his term in office, and not waiting until afterwards to spill the beans. He cuts right to the heart of the matter in stating that D.C.’s a swamp, not because of gridlock or bickering, but because most people there want it to be a swamp. Let's see if there's a Democrat in Congress who can tell us about the mess on the other side of the aisle.