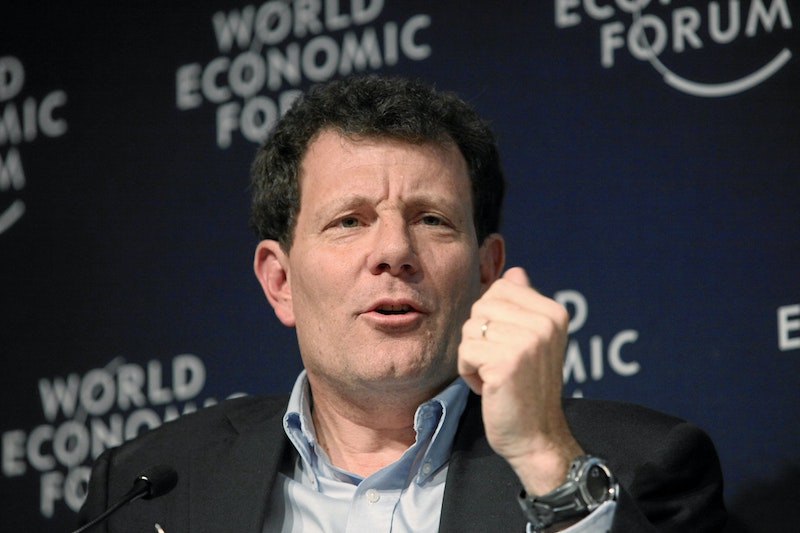 That was the first word of New York Times op-ed columnist Nicholas Kristof’s entry last week, as he beseeched the public to have tolerance for his colleagues who are fighting the good fight against Donald Trump. In a year where similar whine-drenched columns clog the Internet, Kristof’s might be the worst to date. (I’m skipping his Times colleague David Brooks, since that shell of a pundit is a dying dog, if still, beyond comprehension, compensated handsomely for his last gasps of punditry.)

Kristof’s tortured theme is that journalism itself is under siege in today’s political environment, dominated of course by perhaps the most repugnant, egotistical, scatter-brained, and poorly-educated president in modern times. Trump’s constant feuding with his own cabinet, and members of the GOP-controlled Congress, has resulted in a government that isn’t getting much done. Some, myself included, find that not such a predicament, since activist presidents usually impinge upon the lives of American citizens. The idea of EU-hypnotized Hillary Clinton or bring-back-19th-century-social-morals Mike Pence in the Oval Office is more frightening than the bumbling Trump.

Incredibly, eight months after Trump’s ascension to the presidency, the Beltway media still hasn’t figured out how to combat his blustery, hurly-burly style. You’d think, by Kristof’s whimpering, that Trump had suspended the First Amendment and thrown thousands of journalists in the clink, just as Woodrow Wilson did during World War I. Kristof says, “Trump [is] distracted by self-pity and excoriate[s] reporters for committing journalism.” The column’s headline insists that the national media is “not the enemy,” which, by and large, simply isn’t true, at least not to Trump.

I’m guessing that Kristof believes that the media is “committing journalism” by mindlessly reacting to Trump’s Twitter bully pulpit, as if the President doesn’t frequently contradict himself in the space of two hours. Twitter is Trump’s idea of a press conference (an either inadvertently or purposefully canny tactic), and if reporters, sucked into that gambit would refuse to take it seriously and instead ferret out on-the-record sources about what’s happening in Washington, they’d be better off. (Whether the public would benefit is more of a question, since most Americans don’t read beyond headlines anymore, but at least reporters wouldn’t feel like fools for falling for Trump’s whim of the moment, whether that’s firing Jeff Sessions, interfering with the reelection of GOP Sen. Jeff Flake, or phony-baloney economic growth numbers.)

Kristof does own up to one bit of truth: “Critics are right that we in the national media are often out of touch with working-class America, and distressingly often, we are lap dogs instead of watchdogs.” And he’s also right that a reporter’s job can be dangerous, although he personalizes that as well: “I’ve lost reporter and photographer friends in war zones all over the world, and have had other friends kidnapped and tortured. When Trump galvanizes crowds against reporters in the room, I worry that we may lose journalists in the line of duty not only in places like Syria but also right here at home. Trump will get people hurt.”

Let’s be clear: men and women who choose the field of journalism (what’s left of it) and accept overseas assignments that might be dodgy, are aware of the risks. Like Americans in the military, police, and fire departments, or construction workers who dangle at great heights on a development project. So let’s not hand out nobility trophies for journalists who are, not insensibly, trying to advance their own careers.

Another fallacy Kristof peddles: “The irony has been that the more Trump vilifies the media, the more the public has rallied around us—and, finally, this is helping us gain a better business model. Since Trump was elected, the stock price of the Times Company has risen by almost two-thirds. Thank you for your assistance, Mr. President!”

I’ve seen no evidence of a public rallying around the media—it holds the profession in low regard, as has been the case for decades—and the “better business model” Kristof plumps sounds like it was cribbed from a Times press release. Also, while the Times Company share price may have jumped since Trump was elected, that’s no comfort to the scores of Times (and every paper across the country) employees who’ve been laid off or bought out.

Trump, an impossible long-shot when he announced his candidacy two years ago, somehow lucked into the presidency because he unwittingly captured a brief moment in time of the public’s complete disgust with Washington’s Permanent Government. Yet the Beltway media, while it generally despises Trump, hasn’t demonstrated a strategy to work around his on-the-fly attempt at governance. This is not a normal president, he ought not be covered like his predecessors.