Should We Be Kinder to Nazis?

Punching them is fashionable, but not effective. 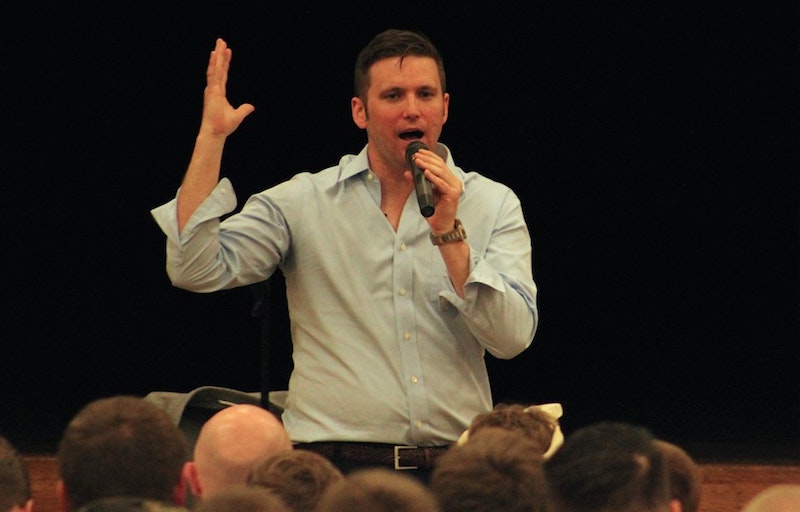 Most Americans are appalled at the thought that Nazis live among us. Nazis are pariahs whose beliefs run counter to everything we’ve been taught about what it means to be an American. Most people feel shame and revulsion when Nazis make the national news, as they did in Charlottesville. Some demonstrators in that normally sleepy central Virginia town displayed Nazi iconography in their march for white power, leaving Americans wondering if there were really any “fine people” among them, as President Trump insisted.

The last thing anyone wants to do is meet a Nazi, white supremacist or a KKK member, much less associate with one in any way, which is why so many were outraged when they saw the August 24 headline, “We Need To Start Befriending Neo Nazis.” Bethany Mandel, writing for Forward, explained why we need to stop punching Nazis and think about trying some more productive approaches.

The headline was clickbait, so some hoping for a good hate-read might’ve been disappointed. Mandel’s not advocating that we widen our circle of friends to include fans of the Third Reich. Her point is that it is possible to penetrate a hate-filled heart if you can get the hate out of your own long enough to give it a shot. That message was lost to the article’s overwrought detractors on social media. To those who treat the Internet as one big Wailing Wall, there’s no need to actually read an article and give it some thought before joining the aggrieved mob.

In a time when so many want to punch a Nazi, or at least want someone else to punch one for them, the author’s message is a tough sell on the political left, where Antifa violence against “fascists” is often seen as heroic resistance to budding evil. Mandel starts off with an anecdote from her childhood, when a girl in another grade who didn't know she was Jewish started spouting some anti-Semitic comments one day on the school bus. Mandel told the girl that she happened to be Jewish, which was awkward, but they eventually became friends. Someone who’d had hatred instilled in her at home came to see someone “different” as just another a human being.

This is the kind of talk that can get you labeled as an apologist for bigotry, even if you happen to be Jewish. We're programmed to see those with illiberal views on marginalized groups as bad people rather than products of their environment. Why engage with them when it's easier to make yourself look better by shouting about what racists they are?

For those who believe bigots cannot be rehabilitated, Mandel does provide concrete examples of people who were exposed to the object of their hatred and gradually came to see the error of their ways. Blues musician Daryl Davis, for example, is a black man who meets with white supremacists as he tours the U.S. and asks them one question: “How can you hate me if you don’t even know me?” Davis, whose story is captured in a Netflix documentary, claims to have persuaded around 200 KKK members to quit the hate group.

The writer also cites David Abitbol of the blog “Jewlicious,” who interacted on the Internet with Westboro Baptist's Megan Phelps-Roper for a year, after which she left the “church” and took most of her family with her. And then there's Derek Black, son of Don Black, founder of white supremacist website Stormfront. Derek had been groomed as the heir to the franchise, but in college an Orthodox Jewish classmate invited him to a series of Shabbat dinners and he renounced his racist views, much to the chagrin of Don.

The conciliatory nature of this Forward article doesn't fit today’s polarized mood of these times. This tweet is a representative example of the reaction: “If by ‘befriend’ she means ‘set them on fire’? The keys are like right next to each other.” In a similar vein, there was “Step one of kindling a friendship with a Neo Nazi: Punch them in the face. Repeat as necessary. (Trust me, it'll be necessary).” Some were flippantly dismissive, like comedian Kumail Nanjiani, who tweeted, “Cool I'm gonna go try this out. Wish me luck!”

Nanjiani has a point, although he probably didn't bother reading the article. Mandel is indulging in Utopianism, even though she makes valid points. It's not really practical advice to tell others to sit down with rage-filled people. Daryl Davis obviously has a rare and special talent. We’re stuck with the reality that white supremacists, who’ve always been part of American history, are here to stay. They're rising up now, emboldened by Trump's obvious indifference to any threat they may pose. So the question becomes how to best deal with this stain on society. There's a self-indulgent quality to the strident hardliners telling us to punch a Nazi. They give the impression that they’re the most righteous among us, and that only weak compromisers would reach out to a deplorable. Certainly they couldn’t cite their own analog of Daryl Davis. There's no iron-fisted avenger who's punched the hate out of 200 white supremacists. Someone coldcocked white supremacist figurehead Richard Spender Inauguration Day, but it hasn't slowed him down. Maybe it's time to put all the blustery posturing aside and consider new ideas.