A mistake of comparing it to Civil Rights era protesters. 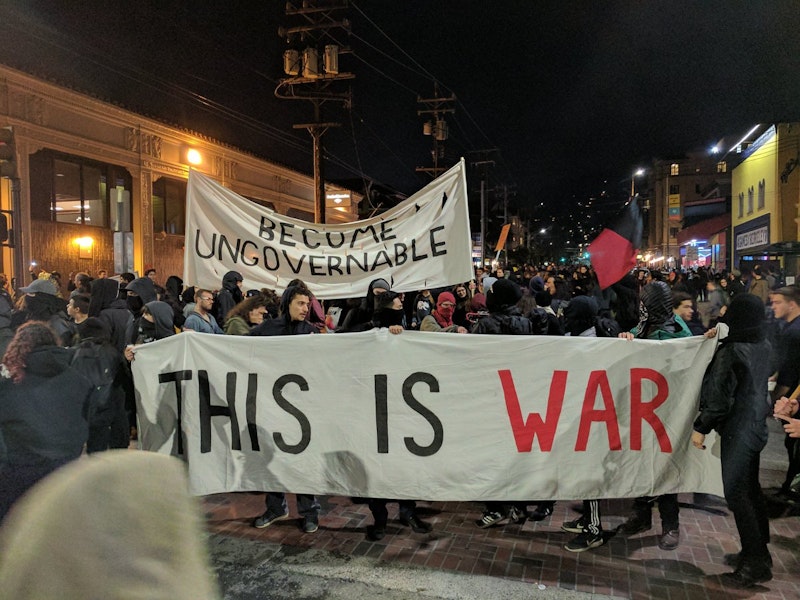 A September 1 New York Times op-ed decries the “false equivalency between groups that advocate white supremacy and those who seek to eliminate it.” Its co-writers, four Christian clergy members, are upset that the media has finally decided to cover the violence of Antifa activists, whose sole aim is to forcefully deny their political opponents—who they claim are all fascists—the right to gather in public. They want to assure us that right-wing violence is always a more serious problem than the left-wing’s. To provide context for, and to excuse, left-wingers punching Trump supporters in the streets, they point to the violence Civil Rights activists in the 1960s sometimes resorted to, even though they were trained to do their work peacefully. Now there's a real false equivalency.

The writers—Michael McBride, Traci Blackmon, Frank Reid, and Williams Skinner—complain that even media outlets that normally fact-check the President “have subtly bought into Trump's both sides narrative regarding right- and left-wing extremism.” In fact, Trump was correct in condemning violence on both sides, although the way he did it regarding Charlottesville was inappropriate. The truth is that there’s been much more violence from the Left since the November election than the Right. What’s different now is that the media’s actually covering it, and politicians like Nancy Pelosi are speaking out against it.

This op-ed criticizes the media for running headlines on the “small skirmishes” that have nearly all been initiated by Antifa activists while ignoring the thousands who protest peacefully. Would that be in reference to the “small skirmish” in Sacramento in June when police said Antifa activists initiated violence that ended up with seven people getting stabbed? Scour the Internet for Trump-era street violence and you'll see that it's not a matter of some isolated altercations and that almost all of it’s coming from the left.

The media misleadingly portrays every gathering of Trump supporters as the exact equivalent of the Charlottesville white supremacist rally, which makes those who show up to protest them peacefully appear heroic. Last month, over 30,000 showed up to protest a tiny free speech event organised by the Boston Free Speech Coalition, in which both left- and right-wingers were invited to participate. Fortunately, the police were there to protect the few who showed up, but it's ironic that thousands of Trump-haters shut down an event specifically designed to affirm the importance of free speech for all.

For “Liberty Weekend” near the end of August in the Bay Area, organised by someone who’d announced that no extremists of any political persuasion would be allowed to participate, and that the event was about peace and unity, feverish media coverage left the impression that it would the be a reenactment of the Nuremberg Rally. Pelosi called it a white supremacist event, even though many of the slated speakers were minorities. This stoked such a rabid response from the righteous left that the event’s organizer chose to cancel it due to valid concerns for his people's safety. Shortly thereafter, after an Antifa rampage in Berkeley resulted in 13 arrests, Pelosi got pressured into denouncing Antifa for the first time, right after she'd participated in dangerously escalating the situation in San Francisco.

The authors have no understanding of what's really happening. There's no comparison between Antifa and the people who risked so much to integrate lunch counters in the Jim Crow South. Those activists were fighting for basic human rights. The morality of their cause was never in doubt. On the other hand, masked Antifa activists, some of them with weapons, are advocating violence to deny people their legal rights of free expression by smearing them all as fascists and then claiming that all inchoate fascist movements must be quashed by any means necessary.

The writers tell us there's an equivalency between what they state explicitly was a movement steeped in peace (e.g. the Greensboro sit-ins that were instrumental in ending segregation at places like lunch counters) and a movement that shows up at every event it opposes to punch people and fight with the police. Still, they tell us that, as members of the clergy, they “place a high value on non-violence,” but that “there's never been a time in American history where justice movements have been devoid of violence,” which is misleading. The violence of the Civil Rights movement was overwhelmingly from the racist side. If black people were pushed to use it, it was in self-defense. Now it's coming from those who claim they're fighting racism, and they use it offensively.

Whether or not Antifa violence is worse than white supremacist violence is a moot point. All that really matters is what it actually accomplishes, which appears to be the opposite of its intent. Not content with just one false equivalency, the authors present another one: That the critics of Antifa are like the cautious moderates during the Civil Rights era who quietly sabotaged the movement—the ones Martin Luther King said we're “more devoted to order than justice.” They imply that Antifa is “fighting for liberation” when their only actual achievement has been to shut down some conservative speaking events.

In order to accept the article’s premise, one must agree that what Antifa claims to be fighting now is as bad as the systemic racism of the Jim Crow years. This means that people gathering and voicing opinions or listening to a speaker is as much of an abomination as the color bars of old South, which is clearly not the case.